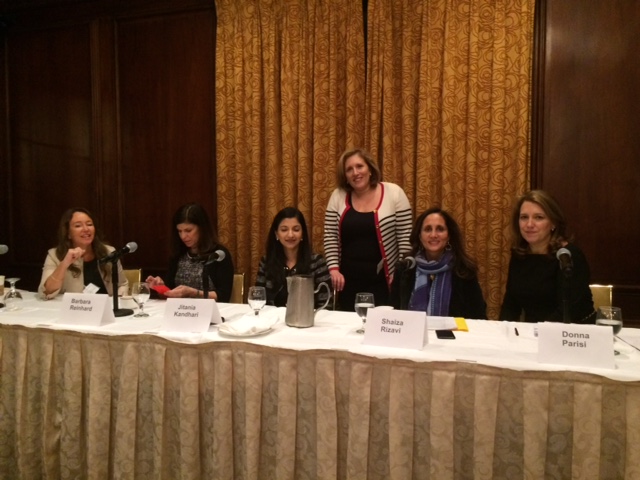 Populism and Protectionism is not good for prosperity

The discussion kicked off with the topic of populism with Jitania Kandhari reminding us this period parallels times in the 20th century specifically, the inter- war period from 1914 to 1945) when periods of boom proceeded busts with the dissatisfaction from those who felt left behind turning to populism. She comments,

“Globalization does bring a lot of prosperity but the elite gain the most. Populists are exclusive not inclusive. They are confrontational not collaborative, and so with reduced commerce and closed borders the results are going to be lowered growth and raised inflation.”

Our panel had varying levels of concern about political risk when it comes to investing but there was an overall agreement on the sentiment that populism and protectionism does not bode overly well for prosperity.

Shaiza Rizavi brought an interesting viewpoint around finding opportunity in the most turbulent of times when she mentioned that many people told her not to go to Kenya in 2008 due to the danger surrounding the dynamics of the election. At the same time, a company she was interested in, Safaricom introduced a new mobile payment platform in Kenya called Mpesa. They had approximately 19,000 subscribers then and now have 26 million subscribers. Payments are made through the platform with many of the poorest being early adopters. Now, 30-40% of Kenya’s GDP now flows via this network. She comments,

“There are growth opportunities even in the most perilous moments if you are willing to take out the fire extinguisher and run into the fire. With the internet and people connected on a second by second basis, you see ideas and flows that were never expected.”

Kathleen Kelley thinks in Europe that we will see higher volatility going forward. She shared an anecdote,

“I did a scientific survey” she says with humor,” of 10 of my male hedge fund friends in London who wanted to vote leave in Brexit and all of them just repeatedly stated that England is the 6th largest economy and that things will be fine.  It is interesting how mindsets are built”.

Barbara Reinhard commented on the fact that this is the first time we are truly having a global acceleration since the financial crisis. She stated,

“Europe is making a recovery. We look at earnings growth and earnings revenue and they are going up, yet the sentiment is still nervous and we are still seeing inexplicably more flows into bond funds than equity funds. Economic expansions die of excess, euphoria and leverage. I don’t see any of these things happening right now.”

Inflation: a reality in the making

The moderator Amanda identified that inflation was a topic that everyone had touched on and asked Kathleen about what is happening in the oil markets.

Kathleen gave an outlook continued OPEC cuts and how the surplus we have in storage is not ending as quickly as we would have hoped. She stated,

“In the 3rd quarter, we might feel the effects of the production cuts and start to draw inventory and that would be a better place for the world to be and not feel like we have so much. If cuts do not continue the price per barrel might be back around the $40’s mark.”

Jitania commented that from a macro perspective, suggesting a period of inflation in the next 2-3 years. She commented,

“China has been exporting deflation and we saw the benefits of that but protectionism and the push to produce locally in the US along with breakdown of trade agreements could definitely create changes.”

Shaiza, often dissenting and providing a different angle, focused on how technological innovation is a deflationary force.

“You start to think about the future differently as many of the historic models wont work for future predictions. The power of connecting people who have never before been connected, and the unleashing of their capability is immense.”

She told the audience how she saw this first hand how lanterns sold to people in Africa and India that previously had no access to light after dark, changed how people interacted and ultimately increased their productivity.

She also mentioned that China’s building a new Silk Road which will allow countries around China to be connected to China and the global economy in an entirely new way. 80% of the China’s oil is currently transported from Strait of Malacca to Shanghai, a journey that took 2-3 months, but with a new port in Pakistan and the 16,000 kilometers delivery journey is reduced to 5,000 kilometers. How will that affect things? She implored the audience to consider the power of change and the power of disruption.

Donna updated the audience with some Citi data on how passive investing has grown to 30% of assets under management by the end of 2015 and how the projection sits at $19.2 trillion of asset flows by 2021. When talking about why has there been a shift, she comments,

“It all comes out of the financial crisis, factor in a lower return environment with lower costs of passive investing and that the banks are not holding risk or warehousing like before the crisis. Also, with improved portfolio risk analysis which is tied to fintech and big data, the way people invest is changing.”

Donna talked about how hedge funds are a maturing market and hedge fund growth is going to be there albeit modest and will hit record levels by 2021. Trends within that sector include liquid alternatives, private debt and private equity so hedge funds are looking to asset classes that are not as easy to access as a headline.

Voya’s Reinhard who has a hybrid of both active and passive commented that as macro driven professionals, she does hunt bubbles and predicts that the tide towards passive has some bubble like qualities that could be worrying for some who just rely on it exclusively. She stated,

“Low cost provider doesn’t always mean highest quality product. In fact, you could argue that passive investing is causing opportunities for active managers. Passive investing, will have at some point unintended consequences.”

Jitania commented on recent research that finding Alpha in investing is cyclical (referencing trends as 1990-94 good for active management, 1995-2000 bad, 200-2009 good and 2010 to current bad). For her business of emerging markets, 40% of returns come from currencies, and she reminded us that is something that you cannot harness with passive investing.

Shaiza again provided interesting insight into the power of disruption and how the private sector can take on roles that the government used to own. She relayed,

“ Amazon for example is now fully capable of handling the logistics of packaging and mail. How will that affect the traditional mail system? Disruptive forces provide opportunity and active investing allows you to be nimble enough to take advantage of that opportunity. “

Barbara counseled to watch wage growth carefully for risk mitigation. Kathleen agreed with Barbara with both of them agreeing that US growth is going to disappoint this year and that reforms are not going to be passed in 2017.

“We are seeing wages starting to pick up and consumer sentiment is high – but they have been behaving different and are stepping back as they see price inflation going up. The stronger dollar is hurting both growth and inflation and keep companies from investing and repatriating “

Jitania offered that China is something that should be watched very closely as China has experienced 82% debt growth over last 5 years. She stated,

“China has added money to its system with many unproductive projects. In 2011, $2 of debt was used to create $1 of GDP and now $5 of debt is used to create 1 dollar of GDP. From a macro perspective, it is definitely something to affect the world since China contributes to a third of world economic growth. “

Jitania added insight into deglobalization and the lingering effects of it on strategy.

“We like countries that have domestic drivers of growth that aren’t relying on external capital flows; countries like Indonesia and even some of the Eastern European countries. From a developed market perspective, we prefer Europe to US. I can buy the top 10 European banks for the market cap of Apple in the US and when something like that pops up on my screen, it feels like distortion.”

Amanda Tepper offered that investor relations is an area that has a positive impact on acquiring assets stating her study which shows that firms with good investor relations result in raising four times more capital than the top performers.

What makes investors choose managers? Performance is not in the top five reasons stated Amanda.

Donna highlighted fintech as an area to watch starting

“With the existing regulatory schemes, the banking sector has the upper hand when it comes to fintech. We do have a regulatory sandboxes – such as exists in the UK but by and large regulation is a barrier to entry for FinTech startups. Asset management has embraced fintech in the area of data analytics. I think we have seen this most in the retail space with robo-advising and partnerships like Betterment and Goldman Sachs and it is an area to follow.”

Shaiza urged us to rethink the vocabulary we use. Rethinking how we define borders and how we bucket ideas and opportunities. It is an interesting moment to think about the permeability of borders and how technology has changed the ways things get done. She added,

“It might not be possible to even have borders and the protectionism that the populism trend is advocating given technology.”

Barbara added a last piece of advice for all of us in the audience.

“My advice is pay attention to your target date funds – think about yourself for 5 minutes and go check your own retirement funds and apply the advice you give to others when investing money to yourself.”

And, she is right.