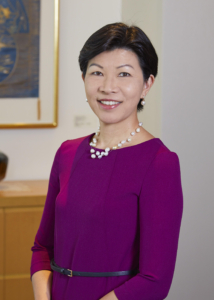 In the years since she was first profiled by The Glass Hammer in 2013, Matsui’s role at Goldman Sachs has evolved – while she continues to focus on Japan portfolio strategy, she also serves as vice chair of Goldman Sachs Japan.

Her responsibilities in this role include representing the firm in various external activities, including serving on government advisory committees and speaking at conferences, where she is regularly asked to comment on Japan’s stock market and macro economy. However, Matsui notes that “the main core of my job hasn’t changed – I still publish research and meet with clients regularly.”

During her undergraduate years at Harvard, Matsui developed an interest in international affairs and government policy, and initially planned to pursue a career in the foreign service. After her first internship experience within the Bureau of Intelligence and Research of the State Department, she earned a master’s degree from Johns Hopkins University, spent time in Japan where she met her husband, then worked for several years at Barclays de Zoete Wedd in investment research before joining Goldman Sachs in 1994. Commenting on the arc of her career to date, Matsui says: “Despite giving up on the foreign service, my career as a research analyst has ironically allowed me to make a contribution to the gender diversity movement in Japan and help drive change in this important space.”

The Worst Advice I’ve Ever Received

As a junior analyst, Matsui was told to ‘work hard, keep your head down, and you will go far.’ Today, she says: “This was the worst advice I could have been given as a woman just beginning her career, but when I first began working the idea that an ‘invisible hand’ would simply promote you was widespread.”

Matsui recommends that junior women focus on doing their job well, but also engage in networking in order to educate senior stakeholders on their role. “Aside from excelling in one’s job, women need to also identify mentors, connect with others across their organization, and share their accomplishments.”

A year after making partner at Goldman Sachs, Matsui was diagnosed with breast cancer at the age of 36. “I had no symptoms, and I was in denial that I was sick – with two young children at home,” she says. “I took eight months off work for surgery, chemotherapy and radiation, and during this period my family and I felt the full support of the firm. This level of support is one of the reasons why I’ve been at Goldman Sachs for 25 years.”

Empowering Other Women to Succeed

In addition to the research she conducts tied to women in the workforce, Matsui is a board member of the Asian University for Women (AUW) Support Foundation. The Foundation provides funding to AUW, a liberal arts, women-only university in Bangladesh that educates individuals that are the first to attend college in their family.

“Working with the AUW ties into my personal passion for women’s empowerment, and the key to empowerment is education,” she notes. “If you want to effect change and take on a leadership role in your community, you really need to have a tertiary education beyond secondary school – and this university is helping empower women around the world.”

Matsui, who was ranked number one in Japan Equity Strategy by Institutional Investor multiple times, initially became interested in examining the demographic challenges Japan’s economy faced after seeing many of her peers remain at home after having children. “Japan has faced acute challenges because there are widespread unconscious biases and gender role stereotypes throughout the country,” explains Matsui. “I experienced this firsthand when a lot of my Japanese friends who were new moms did not return to work in the same way I did due to various factors.”

Matsui thus began to delve deep into the “structural challenges” that were affecting the Japanese economy, including identifying potential solutions that could be enacted by the government to spur greater female representation in the workplace. In the initial 1999 Womenomics report, Matsui and her team recommended the government institute enhanced labor laws, expand childcare facilities, and revise the tax structure, while corporations should provide additional childcare support and clear maternity leave policies. In addition, Matsui called on ‘male champions’ and other women to make it more “socially acceptable to participate in the workforce while having a family.”

In Womenomics 5.0, Matsui revisits the progress that has been made in the last 20 years to boost female workplace participation in Japan, noting that the participation rate has increased to 71 percent, surpassing that of the US (66 percent). In the report, Matsui again makes recommendations for the public and private sectors, as well as society overall:

Reflecting on the progress made in Japan in the last 20 years, Matsui says: “There have been definite areas of progress, but there is still significant work to do to elevate women into leadership positions.”