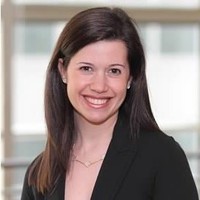 “Find a passion that you will get excited about every day,” recommends BlackRock’s Stephanie Epstein.

She finds that young professionals are often overly focused on job titles, rather than the job function itself. For example, she found herself debating between two choices—investment banking or consulting—so she focused on determining which activities she most enjoyed and was best at, such as problem-solving, which helped clarify her career goals. “Have an open mind as there are so many opportunities available today that allow you to be creative, whether it’s trading operations, technology or marketing,” she says.

A Career At One Firm, Marked By Different Roles

That advice has served her well over the course of her career. Epstein joined BlackRock, a leading global asset manager, in 2002, but thinks about her career in four distinct phases even though they were all at the same firm. She first joined the firm’s institutional client business, working mainly with U.S. pension plans, which she said afforded her the opportunity to really learn the ecosystem of asset management. Then from 2005 to 2010, she assumed a more operational role, assisting with efficiently integrating the different corporate acquisitions that BlackRock was making to build out its capabilities; it was then that she also learned the inner workings of Aladdin, BlackRock’s risk management technology.

Her third phase was as chief of staff to the president, where she led a team who managed business activities on behalf of BlackRock’s president, building out the role, as she says, “from a white sheet of paper.” It was during that time that she made a lasting impact on the firm’s culture, which she describes as its “secret sauce.” One effort she’s particularly proud of was instituting a firmwide rewards and recognition program that enters its sixth year this summer. The awards are designed to honor employees who embody the firm’s principles, recognizes those who foster an inclusive culture or are excellent people managers.

“It’s a chance to acknowledge amazing colleagues who are great examples of our culture,” Epstein says. “I am proud to see that it gets stronger every year.”

And her fourth and current role is as Chief Operating Officer for BlackRock’s global marketing department, where she is responsible for helping accelerate its transformation to be more data driven. “The marketing world today is so exciting; we are on a journey to articulate our purpose and embed it in everything we do, both externally and internally,” Epstein says.

“Externally, we are focused on helping more people experience financial well-being. From a marketing standpoint, we do that by creating different types of content that prioritize story-telling on a human level to present the empathic side of our brand. Then internally, we want to help our employees connect their strengths back to BlackRock’s purpose of helping others experience financial wellness,” she explains.

Epstein is fascinated by how brand voice can impact the business. Her team recently spearheaded the launch of a new brand identity that incorporates color, typography and tone that all work together to present what she calls a “category-busting look and feel.” While most financial services firms rely on blue tones, BlackRock’s new look breaks out of that mold and leans into black and warmer colors, like orange and yellow. In addition, they are using real people in their photography, which has resonated well and helped strengthen connections with clients, she says.

Paying it Forward to Increase Diversity

Epstein has been fortunate to have been surrounded by amazing women who have acted as role models and sponsors. Now she pays it forward by helping develop women in leadership roles.

One group that has been helpful to her is BlackRock’s Women’s Leadership Program, which helps high-performing women advance their careers. “It is specialized to women with aspirations to make a bigger impact, and it is tremendously helpful for the cohort of women who have been through it, both for sponsorship opportunities and for the ability to network.”

In addition, the Women’s Initiative Network, now in its 12th year, is one of the firm’s most sophisticated employee networks, and she notes another important diversity-related program called “LEAD,” for Leadership Excellence and Development, which is designed to help build out the company’s bench of diverse leaders.

“Many industries are tackling the issues of diversity and inclusion, and financial services is not immune to challenges, so it’s gratifying to help pave the way to further the advancement of women,” Epstein says.