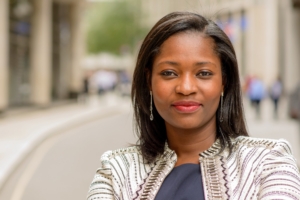 “To my mind, success means that you have found a true balance that works for your individual circumstance, but in order to reach that equilibrium, it is absolutely necessary to devote a significant amount of time for self-care, making physical and mental well-being an absolute priority.” To that end she finds that using vision boards is invaluable as they offer a sense of purpose, direction and achievement in all aspects of life—including personal, family, financial, social and professional. And, she adds, it is important to realize that one’s perception of success can change, so it is important to reflect often and ensure that at any given time, you are heading in the direction of your most current iteration of the definition of success.

Finding Success Of Her Own

Hanson Ofori-Quaah’s educational career was impressive—she read law as an undergraduate at the University of Bristol, then studied for the Legal Practice Course at the Oxford Institute of Legal Practice and trained to be a solicitor at Norton Rose LLP, where she qualified as a corporate lawyer focusing on mergers and acquisitions within the mining sector. After a year in that role, she decided to transition to the area of finance law, focusing on project, energy and infrastructure finance. She moved to Milbank LLP seven years ago and is currently a senior associate with a practice that predominantly focuses on financing energy, infrastructure and mining projects in Africa and the Middle East, including advising on cross-border, multi-sourced financings that involve commercial lenders, export credit agencies and development finance institutions.

Seeking Gender Balance Should Be The Industry’s Ongoing Mission

One of Hanson Ofori-Quaah’s first realizations when she joined corporate law was that the gender balance in the legal profession would not reflect what she had experienced in the lecture theatre, where there were as many, if not more, women enrolled. She found most of them to be incredibly ambitious, having set their sights on the highest prizes in the legal profession, that of being Queen’s counsel, an equity partner or general counsel for a top-tier company.

However once she started her career, she quickly realized that although a large number of women were entering the profession, only a very small minority were making it to the “top,” whether they had chosen the path of parenthood or not. And, she has also witnessed the under-representation of black female lawyers in senior positions in law firms in the city.

Hanson Ofori-Quaah had assumed that, as it was in law school, working hard and getting good grades would assure your success. But in the world of law, she has found that while hard work, diligence and dedication are important, it is also equally important to be aware of and practice effective internal and external self-promotion in order to stand out from the crowd, raise your profile and be in the best possible position to achieve promotion through the ranks. And, having a mentor, or even better, being backed by the support of a sponsor, has a significant positive effect on a person’s career trajectory.

“In my experience, for a person to truly thrive and succeed in an organization, you need someone in a position of seniority who is ready, willing and able to put their name and resource behind your advancement,” says Hanson Ofori-Quaah. “Working hard so that you are brilliant at what you do is the first step, but I think it is also vital that you have someone advocating for you when decisions that impact your career progression are being made.”

Unfortunately, her experience has been that more often than not, women tend not to have this benefit, which can have a significant impact on the success of their career progression.

As in any area where there is the potential for bias—either conscious or unconscious—the key to improving this situation starts with those in senior management positions within their respective organizations taking steps to review the decisions they are making. “I encourage them to regularly consider the profile of the people they tend to sponsor, and challenge themselves to widen this pool for the benefit of those who are able but underrepresented,” Hanson Ofori-Quaah says.

Role Models Can Lead the Way

While she still seeks the benefit of a sponsor, Hanson Ofori-Quaah has been fortunate to have two “absolutely phenomenal” women whom she considers as professional role models: Lisa Opoku and Paulette Mastin. She first came across Opoku’s profile in another GlassHammer piece, when she had recently returned to work from her first maternity leave. Having read Sheryl Sandberg’s book and eager to put the advice into practice, she plucked up the courage to send her an email, and to her amazement she responded. She was drawn to Opoku’s story; while she is currently a Managing Director at Goldman Sachs, she began her career in the legal profession and like Hanson Ofori-Quaah is of Ghanaian decent with two children.

“Lisa has provided me with the type of invaluable and practical advice that every working parent needs,” Hanson Ofori-Quaah says. “I also admire her passion to develop and promote talent, especially in women in her organization, and I believe others in leadership positions should aspire to emulate that as it would undoubtedly lead to higher retention and promotion of women across many organizations.”

Her other mentor is a counsel at the Magic Circle law firm Linklaters and as Hanson Ofori-Quaah says, “I do not exaggerate when I say she is the ‘matriarch’ for numerous lawyers of color, particularly female lawyers of color, in the Square Mile.” In addition to her day job as counsel in a very demanding role, Mastin is the chair of the Black Solicitors’ Network and a mother of two, yet always makes time to mentor others.

Seeking any opportunity to continue to learn, Hanson Ofori-Quaah has found the Milbank@Harvard program to offer a tremendous impact on her career to date, as it has given her the opportunity to be taught by leading professors at Harvard Law School and Harvard Business School on four separate occasions, each time building on the previous session. The program, which includes intensive interactive courses on finance and accounting, leadership and team management, strategy, marketing, negotiations and macroeconomics, have been important in helping her enhance her position, equipping her with skills and expertise she has found to be invaluable to her career.

“I constantly search for avenues—whether through mentors or educational opportunities—to find professional and personal advice that can build my expertise.”