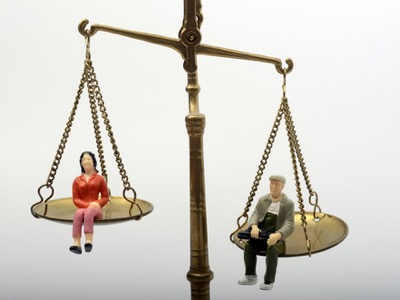 Gender equality is one of those loaded topics that can bring conversation to a halt.

Women’s empowerment has been portrayed as a link to all that men have lost, whether its perceived loss of professional opportunities or loss of the privilege of not having to deal with housework or childcare. There is a fear that expectation of females being subordinate dissipates with equality, which is an outdated expectation to have in modern society to start with but surprisingly present still for some families.

Women’s rising power has left many men seething and many more with a gnawing fear that gains for women mean losses for men. The incredible irony is: the culprit is not gender equality but misguided thinking about masculinity which is shared by both genders and that exacts such a high toll on men.

Read on to discover why based on research, rather than hyperbole, gender equality is a gift for men that keeps on giving.

Gender is highly linked with health risks and outcomes and men continually draw the short stick. But men’s health challenges are substantially driven by their own attitudes and behaviors [which they can change.]

Men who espouse more traditional beliefs about gender make less healthy choices. They drink more alcohol, smoke more, and are more likely to take drugs as well as paying less attention to eating healthily or getting enough sleep. They’re less likely to seek medical care for preventive reasons or to follow their physician’s instructions when they do seek care. Real men don’t seem to think they need to cut their portion sizes as they age, limit how much beer they drink, or spend precious time going to the doctor but they make these decisions at their own peril.

Alongside women’s influx into the workforce over the last half-century, there’s been a shift in how men experience marriage. Marriages became more unstable – at first – as women began evolving from a more subordinate to a more egalitarian role. In the 1980’s the divorce rate among couples where the woman was more highly educated exceeded that for couples where this was not the case. Yet through time there has been a profound shift. Beginning in the 1990’s, women’s higher educational attainment no longer predicted elevated divorce rates and the marital stability of educational equals rose.

Based on my research with parents who sought to proactively share the load at home, both men and women described the power of walking in each other’s shoes and having each other’s backs. They saw themselves on the same team, spending their precious energy on navigating the challenges of equality in a still highly-gendered world, rather than on arguing with each other.
Across the U.S., states with a higher percent of couples in traditional marriages report escalated divorce rates compared to states with a higher percent of dual earner families. Data indicates changing gender norms and family values go hand in hand.

Society has been terribly unfair to men by invalidating the importance of their parenting role. This messaging has no doubt seeped into men’s thinking and worldview. Ironically, both men who live paycheck-to-paycheck and men with incredible wealth similarly perceive prioritizing time away from work to bond with a new child as a luxury rather than a necessity.

Yet if fathers knew how vitally important they were to their children’s lives, they might make different choices. When fathers are involved early and often, their children benefit in critical ways. Positive father involvement from the outset translates into better academic outcomes, more favorable social behavior, fewer discipline issues and greater happiness. The effects of fathering – both good and bad – stay with children far beyond their youth, manifesting during their adult lives via career success and the ability to manage stress, among other ways.

Based on the inaugural 2015 State of the World’s Fathers study, infants attach to both of their parents from the outset if both are actively involved with their care. Paternal engagement is a protective factor for kids who are close to their dads with children being half as likely to suffer from depression during their youth. In other research, fathers who assume a more egalitarian partnership at home raise daughters who are more ambitious.

Not only do fathers influence daughters but daughters influence fathers. A study highlighted in the Harvard Business Review reports men with daughters run more socially responsible companies, particularly with regard to diversity. Men should hope to work for a company where the male CEO has a first born daughter because if he does, he’ll see more money in his paycheck than if the first born is a son.

Men have been saddled with the primary breadwinning role for too long. And while the bias toward men as primary providers persists, a Pew study suggests there may be change afoot. While more than 70% of women and men reported it was very important for a man to be a good provider, women identified their breadwinning responsibility – and that of other women – as far more important than men.

It’s understandable why many men struggle with not being the primary provider, a role for which they have long felt acute responsibility and received social and financial reward. Yet many men fail to see how their partner’s earning capacity provides not only far greater security for the family but also far more flexibility for them. With a financial teammate, men can more easily contemplate starting a business, leaving a bad employer, or push for a promotion. Gender equality helps men to not feel stuck and without options.

Multiple research studies document that men in more egalitarian relationships report lower levels of work-life stress. What may seem counterintuitive for men is that devoting more time to their lives outside of work actually minimizes their work-life stress. The same has not been found to be true for women so really isn’t it time for men to see and talk about the benefits of getting on board with gender equality.

Tune in next week for the second installment of why gender equality is good for men.

Disclaimer: The opinions and views of guest contributors are not necessarily those of theglasshammer.com