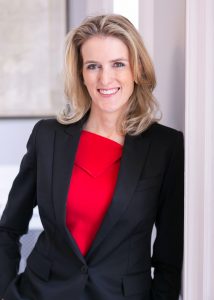 “You own your own path; you are your own CEO. Thus you need to manage your career to get where you want to go,” says Deirdre Flood of Wells Fargo Asset Management.

“For me opportunity knocked based on my work ethic and how I showed up to answer the door.”

Seizing opportunities as they arise has been the cornerstone of Flood’s successful career that spanned Europe and the United States, and back again.

At the ripe old age of 10, Flood remembers telling her elders that not only was she going to work for her money, but her money was going to work for her. Although she had varied interests throughout her teens, those words proved prescient, as she spent the first two decades of her career in financial management helping her clients money work for them.

After studying math, economics and French at University College Dublin, Flood was selected for a prestigious 18-month training program with Bank of Ireland Asset Management, the premier asset management firm. She was particularly fascinated by its global reach, with over half of its clients located outside Ireland. The internship entailed spending nine months at the headquarters in Dublin and then the other half in an international office. Flood requested a New York placement, but rather than the bright lights and big city of New York, she found herself in Greenwich, CT. Nevertheless, it was a smart career move as she found herself focused on the client-facing activities that would define her career.

In order to help gain additional credibility as a youthful female with sophisticated clients and colleagues, she earned her CFA designation. And then by building a reputation for initiative, proactive thinking and quality work, she found that opportunities presented themselves at a young age – and she said “yes” to them.

The day she planned to put in an offer on her first apartment in New York City, she was offered a position in California that she couldn’t turn down — working with a blue-chip list of clients as client service director. So instead of packing and moving to a new home in the city, she was packing her bags for California. This, to her, was an excellent lesson in seizing an opportunity, even when the timing isn’t ideal.

The role was not easy as the firm had some challenges with under-performing products and personnel turnover, and through that she learned another important lesson: You build your best client relationships during the tough times. The way one addresses client concerns – effectively and transparently – has a direct impact on successfully building a career.

Two years later the firm still hadn’t turned around, and she realized her goals and vision for her career was a mis-match with the opportunity the firm could present. Because she had built a solid network of peers in the marketplace, she put the word out that she was open to new opportunities and almost immediately had recruiters and companies calling. Narrowing it down to two appealing options, she ultimately moved to the asset management division of Wachovia, which presented itself as a start-up looking to establish a west coast presence. Flood was able to put a stake in the ground for them as the first person in an outpost office, joined shortly by key associates from her former firm as she built the west coast team.

Flood joined as consulting relations director, a role that had become a niche in its own right, and it was when she was in the process of moving to London to help expand internationally that Wachovia was acquired by Wells Fargo. Flood was interviewed by the acquiring management team and while they were not ready at the time for international expansion, they asked her to step into a leadership role, creating a merged global consultant relations team. She embraced the opportunity, relishing the challenge of integrating two firms.

And that Flood counts as the achievement she is most proud of so far: She was trusted as an unknown entity to play such a significant role at Wells Fargo, the acquiring firm.

In 2011, the world had settled down and international expansion again seemed like the right thing to do so she moved to London to expand the consulting relations team internationally. The role has expanded, and today Flood is Head of International Distribution for the firm.

For Flood one of the most intriguing recent developments in the industry is the growing appetite for Environmental, Social and Governance (ESG) investing. “Having investors take into account a company’s positive contribution to society brings an entirely new, satisfying dimension to my work,” she says.

While Flood has never considered gender as an obstacle, she notes that there is a growing appreciation for the role of diversity. Her one concession, she laughs, is that in her early client-facing days she learned how to play golf to allow her to more easily socialize with male colleagues.

She urges women to have confidence, particularly confronting the fear of speaking up or asking questions in a public setting because they are concerned it will make them look uninformed. “It’s about confidence, and honestly, I can guarantee there will be others in the room who will appreciate that you asked and will think favorably about you for doing so,” she says, adding that on a practical note, you will learn much faster than you otherwise would.

Outside the workplace, Flood indulges in a number of activities to bring balance to her busy work life. Her favorite involves marrying a childhood passion with giving back.

Having grown up on a working farm in Ireland, she developed a love for the beauty and spirit of horses and recently became involved with a program called Riding for the Disabled, where she can use her horse-handling experience to help educate, heal and bring joy to disabled adults and children.