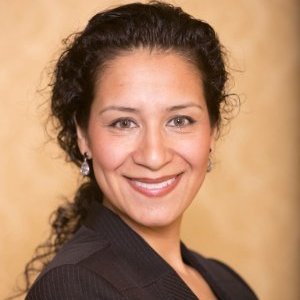 It was a subtle comment that kept Monica Marquez of Ernst & Young LLP (EY) in the closet at her first job – the sense that coming out would hinder her opportunities. And that’s one of the reasons she is so focused on improving the experience for other LGBT employees. “When you are able to be your authentic self, barriers dissolve and your performance becomes just about your performance. The LGBT piece becomes moot.”

Marquez attended Texas Tech in Lubbock, Texas, studying biology with a dream of becoming a doctor. While in school, she realized she had a natural passion for student engagement and involvement. One of her professors, the vice president for Student Affairs, praised her abilities, telling her she would make a wonderful administrator in higher education. She did some soul searching about what drives her and what she most enjoyed doing, and for the first time realized she had options other than the careers she had seen growing up, such as doctors, lawyers or engineers.

With that, she earned her master’s degree in higher education, and after meeting her partner, decided to move to New York, where she felt people would be more open minded.

The timing was less than ideal: they were headed to New York City on September 11, 2001, but postponed their arrival until Sept. 21, right after the 9/11 tragedy. She soon found out that there was a job freeze at most schools, limiting her options. She accepted a position at an art school, which one would assume would have a more open-minded administration, but that was where she felt the perceived pressure not to come out in the role for which she was hired, so she spent her first four years in New York closeted at work.

That challenge convinced her that when she looked for a new role, she would share personal stories during the interview and essentially “out” herself from the onset. “I’m going to ensure they like me for me.”

When she was offered the opportunity to pursue a recruiting role at Goldman Sachs focusing on building out their diversity pipeline of talent, she hesitated. She had only heard “horror stories” about working in a corporate environment, especially the financial industry, but after consulting with friends with financial and business backgrounds she realized it was too good an offer to pass up.

And indeed it was. “Joining the financial services industry was the best choice I’d ever made. It was fascinating to watch the same student development theories I had learned during my graduate studies play out in the workplace, as employees entering the working world transitioned into discovering their skill sets and who they are,” she says. “It was the mirror image of freshmen and sophomores coming into college, and I realized I was able to parlay my background to develop professionals as I did students.”

She credits the recruiters, who saw potential in her ability to bring a different perspective.

One of her first efforts was rolling out the Goldman Sachs Returnship program, supporting women returning to the workplace, which stands as one of her proudest career moments. As she progressed in her career, she focused on expanding her diversity experience to work on initiatives focused on LGBT, women, Asian, black and Latino employees at Goldman for the next seven years.

At that point, she decided she didn’t want to get siloed in diversity, and took a role at Bank of America Merrill Lynch, where she focused on leadership development, working with senior leaders to help them shape culture, organizations, teams and talent. But after a year and a half, she realized she was passionate about diversity and began looking into other diversity roles. As serendipity would have it, her partner Alaina was asked to relocate to the West Coast by her employer, so Marquez used that opportunity to tap into her professional network and start searching for roles out West. Before she knew it, she was hired for a diversity inclusiveness and flexibility role at EY in Los Angeles, ironically with the same report date as her partner –December 2014.

At EY, Marquez has been working on assessing the environment for flexibility, diversity and inclusiveness, underscoring that it’s no longer just focused on women. As one example, gender neutral bathrooms were included in EY’s San Jose office redesign, a concept Marquez is encouraging teams to implement wherever feasible. Her goal is to capture momentum, engagement and energy and focus on creating high-performing teams while weaving in the concept of inclusiveness. And, she’ll be taking the firm’s global and Americas priorities and customizing them for the west, taking into account different cultural nuances based on client groups.

As a whole, Marquez believes the financial services industry has been more progressive and more forward thinking than many.

“Having firsthand experienced being ‘closeted’ in the workplace, it was a priority for me to only consider employers with progressive and inclusive cultures during my job search. I found that, contrary to what I believed, the financial services industry was further along with LGBT initiatives than others. I’m excited to be at EY, a place I knew I could be myself from the beginning, instead of debating the right time to come out.”

She says even though EY has solid stepping stones in place, the firm is always looking for ways to improve and offer an inclusive environment. As part of its overall inclusiveness efforts, EY has initiatives geared toward LGBT professionals and their allies, that promote a welcoming work culture and make inclusiveness real for everyone, whether it’s through support or education.

The firm’s benefits include spousal-equivalent domestic partner recognition (from registration to benefits and policies), gender transition coverage in accordance with the World Professional Association for Transgender Health, and tax gross up on the domestic partner benefits imputed income. “These are subtle policy practices, but they have a big impact on the welcoming feel that things are equal.”

Marquez says she wishes that she had been strong and confident enough at the beginning of her career to say “This is who I am!” She believes she was initially unable to reach her full potential by not coming out, because she was always hiding something, which breeds a lack of trust with managers. “Over the course of my career, I’ve seen this mistrust manifest itself in manager-employee relationships. I’ve counseled closeted professionals who felt that their career trajectory was stalled. And I know why: for the manager and the employee, there’s something that’s off, but neither one of them can put their finger on it. In reality it’s that the LGBT professional doesn’t feel they are able to be their authentic self in the workplace, and the manager perceives the employee as being closed off or not engaged with the broader team. This misperception can adversely affect a career because the lack of a manager’s trust can lead to missed career opportunities for that employee.”

She says that this valuable lesson has made her even more passionate about teaching leaders to be careful about their words, to educate them on how to create an inclusive environment.

When talking to younger LGBTs about career opportunities, she counsels them to research companies where they think they want to be employed and dig in to see the culture: to make sure they embrace diversity and inclusiveness and see how other LGBTs have fared. “You’re going to spend the majority of your time there so you have to make sure it’s a good fit, and you don’t realize how important that is until you’re in the midst of it,” Marquez said. “I tell them, ‘Don’t put more time into choosing a car than your workplace.’”

Marquez counsels LGBTs to avoid making it an issue by seizing an opportunity to out yourself to make others feel comfortable. “Talk about your partner like anyone else would. People take your cues so don’t make it awkward; make it a non-issue.”

She says that managers are often afraid to say the wrong thing, but when you see them trying that says a lot. “We shouldn’t get upset if their response isn’t perfect, but instead look at those as teaching moments.”

Marquez is involved in the Association of Latino Professionals for America (ALPFA), where she has hosted panels to discuss the nuance of the LGBT journey in the Latino community, which tends to be conservative.

She also works with students, helping broaden the definition of success for young minorities. “Growing up in a small west Texas town, success was defined narrowly. I have a huge passion for educating students about what it takes and how it works,” she said, noting for example that they wouldn’t necessarily know that if you want to get an internship at EY you need to apply early in the fall of your sophomore year in college.

Marquez and her partner, Alaina, now live in Los Angeles and have begun to explore all of the amazing areas and outdoor activities the West Coast has to offer. “The adjustment from New York City to Los Angeles has been significant, but we are enthusiastically determining for ourselves if the West Coast really is the best coast!”