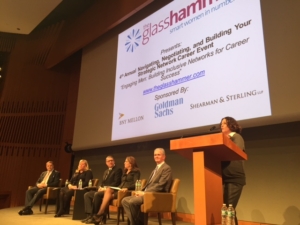 Every year The Glass Hammer hosts a career development event called Navigating, Negotiating, and Building Your Strategic Network. This year’s event, sponsored by BNY Mellon, Shearman & Sterling and Goldman Sachs, focused on how leaders and aspiring leaders — both male and female — can engage more men in efforts toward improving gender diversity.

For too long, noted Nicki Gilmour, Founder and CEO of The Glass Hammer, men have been excluded from discussions on gender diversity, and that’s keeping well-meaning diversity allies from speaking up and taking action on workplace equality. She asked attendees to reconsider who they “authorize as an expert, pick as a team member, and generally promote.”

The panelists weighed in on why gender diversity is such an critical area of focus.

“In my mind, diversity is an important driver of business results,” said Parisi. “Diversity of thought, approach, and methods in getting things done all help to create better business outcomes.”

Unfortunately, too many people still think of gender diversity efforts as a zero sum game, a pie with a set number of slices. According to the traditional thinking, if men help women succeed, that’s one fewer pie slice for them.

Parisi took issue with this reasoning. “We’re working together to grow the pie – it’s about collaboration,” she explained. “Gender diversity creates more opportunities for success for all involved.”

Hughes agreed. “If anything the challenge is in finding quality leaders, not that there aren’t enough leadership spots to go around,” he said.

Hughes said one way he’s worked to increase gender diversity at BNY Mellon Wealth Management is to require diverse candidate slates for top jobs. He recalled a time that a search firm turned around a slate of candidates for an executive position with all male, white, 50-something candidates. There were some fine choices, he said, but the recruiter could have done better.

He told the search firm to try again, and to make sure there were diverse candidates on the slate. The next time around, he received a more diverse slate of excellent candidates and eventually, he hired a fantastically qualified woman for the job.

“We’re trying to make the pie bigger,” he explained.

Kaminsky said she also tries to reframe discussions around gender diversity as a matter of talent management.

“If you’re looking for the best person to fill the spot. I think the misconception is that sometimes when you talk about looking for diversity, people think it’s a ‘he versus she’ issue, when it is truly about the best talent” she said.

“Advocacy should be omnipresent,” Gmelich says. He stated that his colleagues know he is “all in” based on his personal and professional advocacy of the advancement of women.

Gmelich explained that he’s always been passionate about fairness, and perhaps part of his interest in gender diversity is due to the sponsorship of the woman who initially hired him at Goldman, Jackie Zehner.

However, Gmelich emphasized that younger professionals should remember that they are responsible for driving their own success.

“If you think someone is responsible for your career, you’re dead wrong. You are your biggest advocate,” he said. “Other folks are also working diligently, – it is not enough to work in a silo.”

Parisi reminded the audience that sponsorship is a two-way street.

“Sponsoring or advocating for someone takes a little bit of a leap of faith,” she said. “You’re putting yourself out there on their behalf. Because of the risk involved, you’re not going to do it for everyone.”

As such, protégés (people receiving sponsorship) should return that trust, and make sure to meet the expectations that have been set by the sponsor, Kaminsky said.

“You have to be willing to show vulnerability,” she said, and to ask for help when it is needed. She also advised the panelists to distinguish between people who are providing advice (mentors) versus those advocating on their behalf (sponsors).

Men can distinguish themselves as leaders by championing gender diversity, Hughes said. Hughes chaired his group’s diversity committee for five years. “I think symbolism does matter,” he said. BNY’s Mellon male CEO chaired his company’s women’s network for years as well. “It showed this very senior guy cared enough to personally participate and chair the women’s affinity network, and made sure roadblocks were taken down.”

He added, “And as a result, a lot more men attended.”

Finally, Gmelich talked about how diversity to him isn’t just a workplace matter, like flipping a light switch. He said he wants to live his commitment to gender diversity, and as a father to four girls, he explained, “I think about the environment I want them to have at work and that drives me.”

“I’m not just tilting at windmills,” he said. “This is a big thing for me.”

The panel recognized that much work has to be done by both men and women to ensure that on a daily basis any unconscious bias is overridden and that real talent gets to thrive.