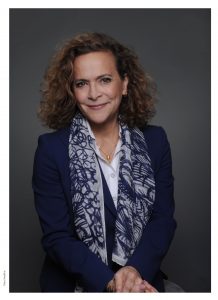 That’s the one piece of advice that Rebecca Macieira-Kaufmann would share above all others that she’s come across during her career. So many people try to fit into a box of what they think they need to be, she adds, but if you are true to yourself, trust your intuition, and work hard – all of the pieces will fall into place. Being yourself will give you the confidence to discover worthwhile career opportunities that will lead you to the role you were destined for, she says. “I wish I’d taken this advice myself seven to 10 years earlier. That confidence will carry you through to find the best place to be – and it’s probably in a role that you didn’t even know you could handle.”

Macieira-Kaufmann spent the early part of her career abroad, working in France, Finland, Hong Kong and England. As a management consultant in London she spent most of her time traveling on multinational accounts due to her language skills and international experience. After three years in London, she returned home to her native San Francisco and began working in credit card product management at First Deposit, which became Providian Financial.

From there, Macieira-Kaufmann moved to Wells Fargo to run marketing for the insurance division. Her roles expanded over time and she ended up running all of Wells Fargo’s small business segment, overseeing two million customers. This success led to an offer from Citi to become president of Citibank’s retail banking unit in California, where she combined the northern and southern region into one.

Today, 11 years into her tenure at Citi, Macieira-Kaufmann is once again in a role with international elements as the head of Citibank’s IPB U.S. group. In this role she manages the wealth needs of international clients who are based abroad and want to bank in the U.S. An enjoyable position, she is building a high-performance team and focused on nurturing talent that will succeed by working cohesively.

The common thread throughout her career has been her ability to transform divisions and companies and bring them to scale. Currently she is pursuing that same vision by helping make life easier for clients with Citibank’s growing digital capabilities; for example helping large corporations that are moving executives around the world, yet want to pay employees in dollars. “We are making it simpler and safer for our clients to bank as they desire.”

Macieira-Kaufmann feels fortunate that throughout her career she has been a part of teams that are focused on people development. “It’s vital to have that supportive person who helps clear your path, and maybe even pushes you to a role you’re not sure you’re ready for,” she says, adding that women will often hesitate to jump in if they aren’t confident that they already know a role inside and out.

“You have to have a bias for action, and go for it,” she says. “Surround yourself with yaysayers, not naysayers, because they will help you go for it.” While she knows that it can be hard for executives to find the time to support and mentor women, she says it’s important to find the time.

She is particularly proud of Citi’s Women’s Diversity Initiative, within Citi’s U.S. Retail Bank and Mortgage group, which supports greater gender diversity in order to improve Citi’s teams and communities, while exploring new ways to empower women at all levels. “We want to provide more visibility into the pipeline and help women build their networks,” Macieira-Kaufmann says.

Citi’s Women’s Diversity Initiative aims to provide women within Citi more opportunities to advance their careers, while arming them with useful tools to help them achieve their goals. She adds that women may not be aware that there is an opportunity if they aren’t looking for a specific role. “We must get information out so that candidates feel like they have been tapped on the shoulder,” Macieira-Kaufmann muses. “We have to open up transparency in the recruiting pipeline to make sure that people aren’t being screened out inadvertently.”

Macieira-Kaufmann herself has been the beneficiary of a number of women’s groups, both inside and outside of the workplace. She has particularly found value in being part of the Financial Women of San Francisco, as well as a cross-industry group called the International Women’s Forum, where she’s been able to interact across industries with everyone from female pilots to authors.

A devotee of the arts, Macieira-Kaufmann plays the piano and participates in a dance class when she’s home. She also serves on the Board of Governors for the San Francisco Symphony. Although she travels extensively for business, she also enjoys personal travel and spending time with her family, including a son who is 22 and a daughter, age 20.

“I have many outlets, and that’s what allows me to be my personal best,” she says. “Every day may not be perfectly balanced, but all in all, I have a whole life.”