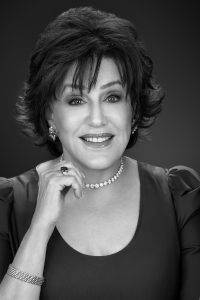 “Don’t think too hard about your next career step; try whatever is your fancy and give it a go. That’s how you will find success in both your personal and professional life,” says Adrienne Rubin.

In fact, the first page of her soon-to-be-released book Diamonds and Scoundrels: My Life in the Jewelry Business is a poem with the first line, “Somebody said that it couldn’t be done.” But it can, Rubin says. “Whatever you want to do, make it happen. You have it within you.”

From Teaching to Business Building

Rubin started as a French teacher in the ‘60s and ‘70s; even though she had thought about law school, most women in that era didn’t tackle that sort of career—instead, if women worked at all, it was mostly either teaching or stenography as the breadth of careers available.

After Rubin’s second child was born, she became a substitute teacher, but quickly found that they weren’t respected, unlike her attorney husband, which caused frustration. She turned her attention to volunteer work, but she soon learned that volunteer work also wasn’t for her. On vacation she was offered the opportunity to be an importer of silver jewelry, and she jumped at the chance finding that business offered both money and respect.

However, Rubin soon found that silver wasn’t the top seller she had expected….instead, gold was the trend, and women were even buying it for themselves. She pivoted to gold and soon added rubies, sapphires and other gems to her line. “I learned on the road, taking my merchandise to jewelry stores, where I would listen to their advice about what they needed from suppliers and manufacturers.” After more research, Rubin became a supplier for charms, charm holders and chains, and expanded her marketing by attending industry conferences where she connected to gift stores, which became a large part of her selling success.

“What drove me wasn’t a passion for jewelry itself, but for helping other people make money; I found that if I had the right product and could sell it to the retailer for the right price, they would prosper as well,” Rubin said.  For that reason she traveled extensively to find new products each and every season.

One of her biggest challenges was to avoid being taken advantage of as a businesswomen, and in hindsight, she realizes she wasn’t always strict enough in whom she sold to, which meant she often wasn’t paid. In fact, that’s the impetus behind the “scoundrels” reference in her book’s title. For example, one of her early clients was a gambler who took diamonds on loan and gambled them away. It required determination to get out of that situation—and others she encountered along the way—but she was able to do so with ingenuity.

Of course, trends change, and Rubin soon found herself working against a wide variety of factors. First of all, today’s younger generation isn’t as interested in jewelry, as they have turned to other priorities. “When it comes down to getting a new computer or a gold bracelet, they are apt to turn to the prospect of a new tech gadget,” she points out. In addition, gold prices have skyrocketed, necessitating a large amount of capital, and there is fierce competition from the internet. For this and other reasons, her attention now has turned to real estate, often refurbishing properties, which is her current way to stay in the business game.

Advice for Women, No Matter What the Business

“Be your own boss if you can,” Rubin recommends, and take equal care with those you hire and those you sell to. “It’s vital to vet both parties,” she says. “In any business you will run across unethical people, so you have to be business-minded to make sure they aren’t taking advantage of you or using poor judgement that could reflect on your own success.”

And to really go full steam ahead, don’t be afraid to make bold decisions, such as borrowing money as needed to get your business to the next level.

Finally, she recommends realizing that you need to find balance to be content. “Business can become a 24/7 proposition if you let it, particularly at the beginning when you want to be successful and get your career on the ground.” But that can lead to neglecting other parts of your life unless you pay attention and vow to keep things balanced. Rubin, for example, focused on making sure to have uninterrupted family time on an annual vacation to balance her other travel.

Today she is an active volunteer with Cedars Sinai Hospital and the Arthritis Foundation. In addition, she became an avid cyclist and for many years has participated in the “California Coast Classic,” biking from San Francisco to Los Angeles. While she initially wasn’t a bike rider per se, she equates acquiring the skill to learning many aspects of business. “You have to commit to learning in order to succeed.”