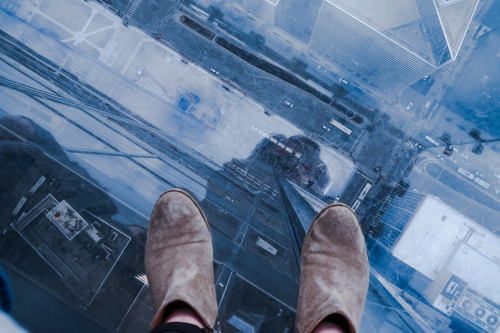 The glasshammer has written extensively about the phenomenon of the glass cliff over the years whereby women have been put in turnaround high profile positions that are for lack of a better word, an impossible task or poison chalice.

The best research on the topic is still by Michelle Ryan and Alexander Haslam, of the University of Exeter which shows that there is a quantifiable tendency for women to be hired to elevated positions in times of crisis and uncertainty only to be unfairly penalized when they fail.

The effect of this is to create an unrealistic expectation for women executives, setting them up for failure. When, because they were handed a rather stacked deck, expectations are not fully met, often a company feels justified in going back to a status quo leadership by putting a man back in charge. They can then feel satisfied that though they tried to promote equity, it just didn’t work out this time. A 2013 study demonstrated just how prevalent this is. In over 600 transitions from female executives in Fortune 500 companies, only four women were succeeded by another woman.

The system, to put it bluntly, is rigged. And research demonstrates this happens over and over again in many industries.

Ways to avoid slipping off the cliff

It’s not shocking that women must do more than men to protect their agency in the workplace. Throughout the business world, women have routinely faced difficulty that men do not register. From securing business loans to facing a growing gender pay gap, women in executive level positions have been systematically discriminated against.

However, in many cases there are lessons from those who have come before that will help navigate the cliff. These include pieces of advice that men have routinely taken advantage of where women have traditionally had a hard time embracing them:

– Learning to say “NO”: Before taking any position, find out if the company is facing a difficult situation or transitional period. Just because something is offered doesn’t mean it is a step up. Recently, Uber had difficulty finding a female CEO because it was facing allegations of sexual misconduct and security concerns. The women who turned down the position may have done so because they saw it as a glass cliff waiting to happen.

– Set up expectations beforehand: One of the ways companies get away with Glass Cliff behavior is because expectations for women executives are set at an unrealistic level. By coming up with feasible metrics that symbolize success it will be more difficult for anyone to point to the idea that replacement is necessary.

– Outline a long term solution: Part of the issue with a Glass Cliff is that it usually has to do with relatively immediate results. With a long term plan in place, there is less recourse for those who seek to oust a women executive just because the situation seems dire in the short term.

– Negotiate to handle risk: If the company is in a precarious situation, make sure the position is made to be worth your while. Women are 4 times less likely to negotiate their salary than men. Also be certain to research comparable salary and benefits for a position that fits the situation.

Most importantly, to successfully scale the glass cliff you have to first know of its existence. By learning the lessons of the cliff, it is then possible to understand how to be in the best position to deal with it.

For more tips on how to navigate the glass cliff, check out this infographic from Fundera.

Meredith is Editor-in-Chief at Fundera. Specializing in financial advice for small business owners, Meredith is a current and past contributor to Yahoo!, Amex OPEN Forum, Fox Business, SCORE, AllBusiness and more.