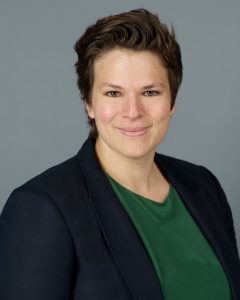 Before finding her current position, Nicole Poteat was unsure there was a career in finance that would allow her to truly bring her full self to the table.

Now, as a Private Client Advisor with Bank of America Private Bank she has a strong institution behind her, but also plays the role of entrepreneur, allowing her to combine her professional and intellectual drive with her personal interest in building relationships and helping others thrive.

“It’s important for young professionals to remain open to the idea that even if the seat they are currently in is not a fit, there is still a path out there that will capitalize on the different facets of their passions and abilities. They just have to remain vigilant about seeking it.”

Finding a Passion in Client Service

Fortunately Poteat was able to find that path. She studied government at Harvard and then graduated from Boston College Law School, starting her career in the government and non-profit space. At the same time, her wife Emilie was finishing a PhD and studying the sharing economy, which piqued Nicole’s interest in how companies thrive in today’s environment. That led her to look into a position with Goldman Sachs as a summer associate, subsequently joining the firm full-time after graduation. While her “bigger picture” enterprise strategy role offered lots of opportunity for growth, she realized she missed having a direct impact and forming client relationships; therefore, when she was approached by a recruiter from U.S. Trust, she transitioned to the private banking world where she has been for almost two years.

The position has been an ideal match for her talents and interest. “One of the reasons I love this role is that I can support the development and careers of people doing fascinating work without having to solely focus on one niche industry,” she says, noting that she works with professional such as doctors, founders and investors. “My clients are solving so many interesting problems—often with groundbreaking products—and it’s exciting to be able to support them and help them navigate their lives and their personal wealth as they experience professional success. Many of them are diverse, and it’s particularly satisfying to work with this population who hasn’t historically been in touch with the private banking world.”

Poteat says that one of the biggest looming assumptions when she left law school and started her career was that a transition into the corporate world meant an unsustainable lifestyle with unmanageable work hours. While she has experienced this at times in her career, she has also found a path to sustainability by “developing a career I’m passionate about where the work doesn’t feel like work—it’s a vocation. I love what I do so the time I am spending on it feels exciting and challenging rather than unmanageable.”

And, she says, the key is to be thoughtful about what you want to do—from impact to responsibilities—and then identify where your skills match up to those desires and how that can be applied professionally.

The Process of Finding a Mentor

Early in her career, Poteat would hear people talk about the end product of having great sponsors or mentors, without being explicit about what it took to develop those relationships. “It was a process to learn that there’s no ‘easy bake oven,’ one-size-fits-all strategy to getting the right mentor for you.” And, she points out, it seems especially daunting when all you’re hearing is the end result…the big difference that this one person made in a career.

Now, she has found, the journey to form those strong relationships has to begin with a context where people are ready to see you and what you can offer and even from there, other things need to line up. “Ultimately it’s about finding someone who wants to see you in that way (as a mentee) and cares about you and your career and wants to support you.”

And that can take a lot of conversations to find the people who are going to be willing to support you and fully see you. Poteat is proud that she has found such relationships by forging those conversations, which has led to a cadre of mentors at her current firm, including her manager and colleagues, as well as people from other contexts of her life, such as David Beatty, a friend and founder of Gaingels, an angel-investing group.

She is particularly appreciative of the opportunity to learn from women who blazed trails as the “first” women in the room; noting that her cousin, Jeannette, was one such trailblazer. Jeannette Loeb was the first female Partner at Goldman Sachs. Poteat has been fascinated by the tales she’s heard of those early days and what it was like to be effective in spaces that were built for, and up until that point had only been filled by, men.

She feels fortunate to work for a company like Bank of America that actively works to stay modern by putting diverse teams in place to serve a wide variety of clients. “It’s not the old-school bank of the past, but one that looks like the clients of today, and I’ve benefited from their efforts to be awake to that need.”

A Full Life Outside Work

Poteat is a member of Gaingels, an angel investing group focused on companies with LGBT representation at the C-suite level. She is an active philanthropist, having endowed the Michael Poteat Global Education Scholarship at Elon University in memory of her brother. The scholarship benefits students living with chronic illness, allowing them to experience internships and study abroad, thus hopefully setting them on a path to find a career “click” for their interests. She is also a board member of the Ackerman Institute for the Family, the family therapy non-profit.

She and her wife Emilie live in Westchester with their two golden retrievers, Charlie and Eliot, and recently announced that they will be joined by two more family members when their twins arrive this fall.