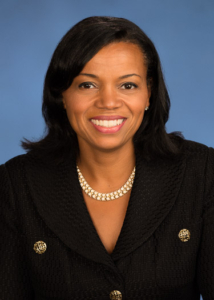 “Be Bold and Take Risks to Be an Agent of Change”

“If you expose people who are smart and hard working to opportunities – and provide them with an access point to begin a career – success follows,” says Goldman Sachs’ Erika Irish Brown.

She notes she is genuinely passionate about promoting diversity and inclusion in the financial services industry. “The sense of purpose I have for my work drives me every day.”

A Beneficiary and Proponent of Diversity and Inclusion

Brown’s first introduction to financial services came via a year-long internship as a college student, which was offered specifically to students from underrepresented minority groups by a state-run bond agency. She describes the internship as a huge win given her alma mater – the State University of New York at Albany – did not send a high volume of graduates to Wall Street at that time.

This internship helped her land an analyst role at Lehman Brothers, which she says was a life-changing opportunity. “Very often, people ask me, why am I so committed to diversity and inclusion?” says Brown. “One reason is because I got my start on Wall Street as a beneficiary of what we now call a diversity and inclusion program.”

After working in investment banking at Lehman, Brown went on to issue bonds for the City of New York and served as a Presidential appointee at the US Treasury in the Clinton administration, ultimately earning her MBA from Columbia University and serving in roles at Morgan Stanley and Black Entertainment Television. She enjoyed the financial markets, the fast-paced nature of her work and the variety of people she was able to work with, but added: “It was a different time – gender, ethnic diversity was low.”

Brown took an interest in the diversity and inclusion (D&I) space, serving as a recruiting liaison for both on-campus and experienced hires – on top of her day job as a banker.

Prior to the financial crisis, Brown began her first ‘official’ diversity-focused role, once again, at Lehman, where her team focused on enhancing diversity at the vice president level and above. Post-crisis – and a brief stint on the Obama administration’s Treasury transition team – Brown joined Bank of America, where she built a team focused on executive diversity recruiting. From there, she went on to serve as Bloomberg’s chief diversity officer, building the company’s D&I platform from the ground up.

“Being considered a subject matter expert on diversity globally has made me very proud,” says Brown. “This is not easy work, it is not easily measured and you have to be bold and take risks in order to be an agent of change.” This risk-taking has led Brown to Goldman Sachs, where she has a large, global platform to influence diversity.

“It was important for me to come in and listen, learn and talk to people,” says Brown of her approach to her new role at the firm last year. “I wanted my expertise to be informed by the culture here.”

After connecting with stakeholders across regions and divisions and gaining a global perspective, she now feels well informed to have opinions, make assessments and execute on the best practices and strategies that will work for Goldman Sachs.

Brown outlines some of the many opportunities in the D&I space she hopes to focus on in the coming months:

Her team has the support from CEO David Solomon and the firm’s Global Diversity Committee. Brown notes that it is crucial to have senior leadership setting the tone – particularly when diversity impacts each and every area of a company, from business performance to client engagement.

“Today, no topics are off the table in the workplace, and people expect to bring their authentic selves to work,” says Brown. “I’ve seen firsthand that this approach has been adopted at Goldman Sachs as well.”

Recommendations From a Life-Long Learner

Describing her roles at several investment banks and why young women should pursue financial services careers, Brown says, “The skills sets you develop in a short period of time, the amount of responsibility and high bar for expectations, and the seniority of people – both internally and clients – that you engage with is empowering.”

Her advice to women as they progress in their careers is to continuously innovate and be life-long learners.

“Ask yourself – are you pushing the envelope, taking risks and being ambitious,” says Brown. “We should all reflect upon our legacy and ensure we make a difference in our workplace – it can be anything from launching a new product to creating opportunities for others.”

Outside the office, Brown continues to push for change in her community. As vice chair of the Bedford Stuyvesant Restoration Corporation, she works to ensure the Central Brooklyn community has access to housing, education and economic development opportunities, arts and cultural activities and capital for small business owners.

Brown stresses: “giving back is important to me – anything I can do to contribute and give back to others, I’ll do.”

And, a mother to three sons, Brown also keeps busy on the slopes, skiing in the winter with her family and cheering on from the sidelines of elite AAU basketball games. “We’re very active as a family, and our time together is so important and a priority to me,” she says.