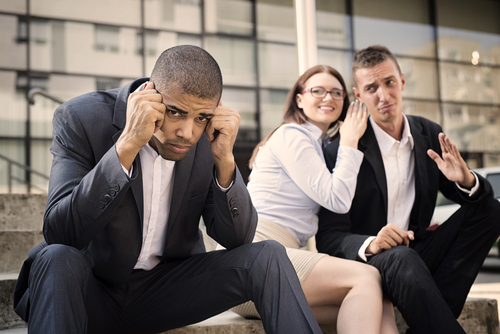 It is Black History Month. Beyond the celebration of African heritage, it is also a time to have the hard conversations.

Hard conversations around race, ethnicity, racist behaviors and what makes someone or something racist are uncomfortable for many people and it takes bravery, an open and developed mind and good intentions to embark on them. If you are a white person you have to face that you might have some white privilege going on, and it is easier said than done. If you are a person of color reading this, know that i am terrified to dissect this, but want to in service of advancing the subject and hope I can provide a way for everyone to think differently. Casual racism and casual sexism have a lot in common, it is like a 2.0 version where it is not exactly explicit but has enough intoned for us to know on the receiving end of it, that there is something implied to ‘keep us in our place’, the place before we were here. The sunken place in the fabulous satire Get Out explains race in America better than most articles I have seen.

It is a fragile yet perfect time for conversations about social identity and specifically race and ethnicity with different voices calling out Gucci and Katy Perry’s products saying they evoke Blackface depictions this week. Liam Neeson disclosed information about an incident that could have ended in a vengeance murder of an innocent black person 40 years ago in the UK. So, If not now, when would we talk about racism, casual and otherwise?

Racist? I am not a racist!

In case you missed the whole disclosure from Liam Neeson, this VOX editorial piece is the best round up of opinion and links I have read about the topic. But, what is striking about this whole incident to me is that he seems oblivious to the obvious conclusions that most of us have around his language today describing the incident in the past. His reaction of surprise of being called a racist for his admission, is casual racism and white privilege, as it is afforded only to people who have the luxury of not understanding what it means to be black, or in other circumstances of casual -isms, a woman or LGBT in this world.

I grew up in the sectarian violence of Northern Ireland so I understand firsthand what he is saying about pitting entire groups against each other based on identity and affiliation by default to a two group system to brutalize the brutalizer or one on their “side” in a vicious cycle of perceived wins. So, his context is what we call in Northern Ireland “tit for tat murder” and I think while it might be hard for people to fully understand what he is saying about his programming, it is relevant here. Not in any way an excuse, but if we apply how one’s lens or worldview shapes us we can start to understand why people will differ in their opinion of what constitutes racism and why that is.

The ‘socialized mind’ is one that does what is expected of it, according to Kegan (Harvard developmental psychologist) who suggests that between 58% -75% of the population can only view incidents subjectively. Simply put, situations only makes sense to them according to how they directly experience events and data filtered through the lens of lifelong cultural and familiar constructs.

I think Liam is still very much unconsciously but not consciously having a reflection around masculinity and its role in the patriarchy. He is now fully starting to challenge his childhood constructs and that review is a good step.But, I have not seen him have any glint of awareness that he is not extending the same review he gave to his constructs around vengeance of the other group to his worldview on race and ethnicity. He has not gotten to a place where he can also see that by asking the second or third question to his friend who was raped consisting of ‘what colour was he?’ was only a deductive question to get an answer he wanted. It was a new form of in-group and out-group category process that remained in his framework from Northern Ireland’s two group system of “Us or them”. So, he did (and does) have bias against people of color and predisposed stereotypical notions, but he had no clue until now and possibly continues to not see it. So, having seen this play out in all aspects of diversity, my question always becomes one of why do the rest of us have to suffer as a default group affiliated member (person of color, woman etc) while the straight white guy has a mere inkling that fish do not know they are swimming in water and wants a prize for admission of a bad behavior? My conclusion is always, ‘better late than never and keep going.’ because what other choices do we have for progress?

What are the best ways to prepare for a hard conversation around ethnicity and race?

A discussion around race is ripe or any other hot topic involving identity and legacy power, whether in this piece or at a dinner party, only if the people reading this or eating dinner with you are not beholden to making meaning of experiences only via the usual cultural sources given to them over a lifetime, processed exclusively through that worldview.

Race, politics, sexism, and the gold or blue dress challenge all boils down to what your brain thinks it knows to be true. According to Kegan and Lahey, developmentally if you can only look through your lens without being able to look at the lens itself, you are beholden to that socialized mindset of tribal, go with their crowd thoughts trapping you forever in subjectively. Sound familiar? The problem is we get nowhere as people name call and soundbite at each other on social media and family dinners and it shuts down an actually productive conversation that is needed to resolve tough topics. Hence, the masses scream on twitter and some people will say they are right in naming racists as racists and others will say that they do not believe that person or product is racist and that is an over reaction and just cannot see what you are talking about or come to their defense based on personal frameworks versus wider systemic thought frameworks, or objective review.

The adult developmental level beyond the socialized mind is the self authoring mind and then the self transforming mind. In this situation and in casual racism, we have to go beyond our beliefs and experiences to understand other people’s experience in their context, not just ours. What Michelle Rodriguez missed in her defense of Liam was not lost on Shonda Rhimes or so many others.

The lack of historical context, bias blindness and willful ignorance required to open one’s mouth and say this about racism is mind boggling. https://t.co/vTdQoGSXMd

In our socialized mind we can argue all day whether he is a racist or not a racist, and we will both feel vindicated. In our self authoring mind, we can apply frameworks that help us understand systemic matters such as societal bias, stereotyping and legacy historical power issues. Then, we can understand why Black Lives Matters for example, is not negating that all lives matter and by saying it is, is a denial of inequity and a microaggression.

Equipping yourself with the capacity to enjoy ambiguity while developing mental complexity and having competing ideas without having to throw one out to streamline or prevent cognitive dissonance, is a growth strategy for you in your career and life.