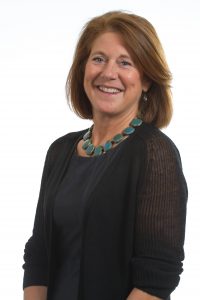 A recent study on the gender gap in sales showed that it was a career that wasn’t even on the radar for many women, which Guardian’s Emily Viner finds to be a shame.

“If women can match a passion they personally have to a sales role, their opportunities are limitless,” she says. “Really caring about the product, program or process is where you can get that mojo and when that happens, the sky’s the limit.”

Finding a Calling in Her Work

That passion has inspired Viner’s work and led to her long, successful career with Guardian.

A first-generation college student, Viner graduated with a marketing and economics degree but was drawn to sales. “I soon realized that a commission dollar is a commission dollar not 63 cents on the dollar like my friends were going to earn and knew that would be my future,” she says. She started in a banking-related industry and then moved into financial services, which turned out to be her calling. “I found such a passion of purpose for families, particularly women, to help them plan for their family’s future,” she says. It’s a cause near to her heart, as she realized what this type of planning could have meant for her family, especially her mom who became a widow at 42.

Viner started at another firm as an advisor, but soon transitioned into leadership and helping the firm grow. Her professional standing grew when she wrote an article for the GAMA News Journal and subsequently spoke at GAMA’s industry conference. Based on that attention, she was soon recruited by two different companies for corporate roles, but at the time her kids were little and neither of the firms offered the flexibility she needed.

She accepted a consulting arrangement with one company while Guardian stayed in touch, eventually reaching out to offer her the chance to architect how and when she would work.

That was the start of a 21-year relationship where she has grown both personally and professionally, with her daughters growing up as part of the Guardian family.

Looking back over the course of her career, she believes that opportunity to write an article and speak at the convention truly changed the course of her career, and it came full circle recently when she was honored with the inaugural Visionary of the Industry Award for her work. “It’s humbling but also reminds me there’s still so much work to do,” she says. But while the quest continues, she appreciates that the award offered a moment to pause and reflect on how much progress had been made.

Viner is ebulliently optimistic about the opportunities available to the next generation of women and implores others to remember the infamous words of Madeleine Albright: “There’s a special place in hell for women who don’t help other women.”

That said, she has also benefitted from the sponsorship and mentorship of many men within the organization, many of whom are now retired, who helped her grow as a professional.
She encourages younger people on her team to find mentors throughout the company who can share wisdom, whether it’s industry-related or focused on professional skills, such as executive presence or making sure your voice is heard in meetings.

Right now she focuses much of her efforts on helping the firm innovate with its workplace culture as a way to retain talent. For example, they have introduced flexible leadership training programs designed to be more accommodating for those interested and uses assessment so that each person gets what they need, when they need it.

And Guardian is expanding their use of apprenticeships to find different pathways and bridges to becoming an advisor so that individuals can find the onramp that works best for them. It’s important, she says, to focus on diversity so our firms reflect the communities we serve.

One of Viner’s most influential learning moments came while she was attending a dinner hosted by Catalyst, a global nonprofit focused on building workplaces that work for women. At the dinner, a key note speaker shared “that men say yes to opportunities, even when they don’t know how to do something. Many women don’t do that and spend more time being ‘competent rather than confident.’ Women need to realize that if they raise their hands, they will figure out how to succeed in the role.”

Viner participates and hosts a number of professional development programs, but one of her favorites is Guardian’s annual Women’s Leadership Summit (WLS). She is not alone: She has heard that many women leaders say that WLS has kept them energized over the years. The network created an important level of support both personally and professionally for women, many of whom might be the only female advisor in an office of 40 men. One regular attendee of WLS who formed a study group from being at WLS recently won a special sales leadership award, and she had this to say about her involvement in the organization: “There’s a study group I have from the WLS that has sustained me, and next year I’ll make sure they’re all up there receiving awards with me,” she says.

Married for 32 years, Viner has two daughters, one a Veterinarian working at the teaching hospital at University of Wisconsin, and the other working at and starting a Master’s program at Columbia University. Viner and her daughters decided they needed an impromptu getaway before they went their separate ways and recently enjoyed a relaxing and rejuvenating long weekend in Turks and Caicos, where they have all always wanted to go. “When I’m with my girls, everything’s ok,” she says.

And she feels confident that they are on the road to success, as she has passed on the importance of financial planning to them. “They have products in place to protect their income, have their investment accounts, and I can see their confidence with their finances. I love knowing that they know saving is such a foundation. Passing this on to the next generation is so rewarding.”