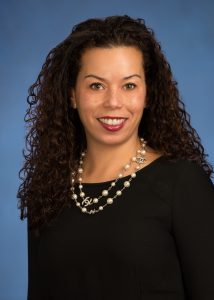 “Throughout your career, finding your true north and being comfortable in your own skin is really important,” says Goldman Sachs’ Carly Scales.

“Having authenticity and being able to bring your full self to the office is an important component to ensure you can do your best work and contribute to your team at the highest level,” she recommends.

One common stumbling block for women? Trying to be all things to all people, all the time. “You have to focus on what’s important to you at any given moment. For me, that’s a constant challenge given my demanding job and multiple pressures on my time and energy, but just being self-aware can make a big difference,” she says.

Her Career As A Testament to Mobility

Scales joined the firm in the Operations Division and spent nearly 13 years in different departments, moving organically to take on new challenges as she progressed in her career. She briefly left Goldman Sachs to work at another firm, but returned after a few years. “I really missed Goldman Sachs’ culture and the focus on our people, whether that be through mentorship and sponsorship, training programs or providing growth opportunities,” Scales says.

Since returning to Goldman Sachs in 2015, she has had the opportunity to work on several key initiatives, including GS Bank USA, which has allowed her to increase her knowledge of different pockets of the firm. In the last three years, she has held roles in the Operations Division, Consumer & Commercial Banking Division, Finance Division, and recently moved into the Technology Division.

“I think my mobility speaks to the opportunities you receive at Goldman Sachs if you raise your hand and accept new challenges. Just say ‘Yes’ and see where it leads,” she recommends, adding that often agreeing to this type of change can be a leap of faith. “People would tap me on the shoulder because I had a ‘can-do’ reputation, and I advise professionals to be willing to take similar risks. There are many avenues for individuals to receive the support they need to be successful when taking on a new role.”

A Focus on Mentoring

While being named managing director was an extremely proud and important moment in Scales’ professional career – a validation that the culmination of her contributions to date had been recognized – she nevertheless feels that mentoring and coaching others has brought her the most satisfaction.

“I think that’s how you build a lasting legacy: I’m very proud when people who work for me or those whom I mentor and coach continue to excel and thrive,” Scales says, acknowledging that while this requires a significant spend of time and energy, it’s completely worth it. “At the end of the day, people may forget the specifics of what you’ve done from year to year (there’s always more work!), but the person who felt supported and guided will always remember your role.”

In fact, she is adamant that her peers will benefit from paying it forward and lifting other women up as often as possible. But, she notes that you don’t always have to look “down” to lift others up.

“Look to the left and right and help out those who are junior to you, but then consider your peers as well. There are powerful partnerships and support structures that can be forged there, and it can happen at any level – whether you are an analyst or a managing director.”

In addition to working alongside her own team, Scales is co-head of the firmwide Women’s Network, where she’s had the opportunity to interact with women across Goldman Sachs to provide engaging programming and networking opportunities to colleagues across the firm.

Advocating for Yourself Reaps Rewards

At Goldman Sachs, Scales has seen that flawless execution and teamwork is fundamental to success. However, she cautions that at a certain point in your career, it becomes important to reflect and analyze your path and determine your long-term goals. Scales recommends that it is critical – at times – to take control of your career path.

Scales learned this from firsthand experience, and notes that when she left the firm in 2010, she hadn’t had a candid conversation with anyone about her goals, nor had she leveraged her internal network, which made her “feel a bit lost.” Reflecting upon this period, Scales wishes she had realized the importance of having such conversations. Now, when she mentors other women, she takes care to impress upon them that it is imperative they learn to advocate for themselves.

“Women in particular sometimes struggle with this, but if we look at our lives outside of work, we are advocating for others all the time – whether it’s our children, spouses, friends, parents, etc. – and we need to realize those skills should translate to the workplace, too.”

In addition, she says that women must never accept that certain characteristics can be perceived in a negative way when displayed by a woman.

While she doesn’t believe it’s done intentionally, she has found, for example, that the concept of “being assertive” tends to have a negative connotation and women are often labeled as being “aggressive.”

“Both men and women need to continue to break that myth and call it out when they hear others use similar terms,” she says.

Living a Life on Many Levels

Scales prioritizes being a mom and a wife, and finds that having her son five years ago made her better at her job, as it provided perspective during those “bad” days, but also helped her become more efficient and focused at work.

These days, you’ll find Scales spending her time outside of work doing activities that five-year old boys love, from basketball to soccer to tae kwon do. However, when she does get a free minute to herself, she enjoys cooking and entertaining – finding that dinner with family and friends is always good for her soul – as well as doing Pilates or enjoying a good book.

Her secret to fitting it all in? Realizing that you have to let go of the idea that you can do everything all at once, and you can do it perfectly. “An impossible standard will leave you drained and likely feeling like a bit of a failure,” she says.

Instead, she knows that there are tradeoffs and you have to make choices consciously. “Today I missed a workout and had cereal for dinner, but work was very productive, and my kid is happy so I’ll call it a good day,” she says. “No one is perfect 100 percent of the time, so try to remember to be kind to yourself while you’re conquering the world.”