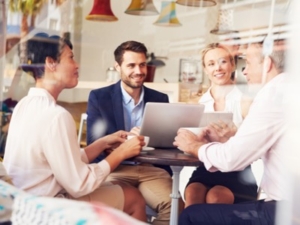 Mansplaining. If you’ve lived and breathed in this world as a woman, you’ve experienced it. If you work in a male-dominated office, it might be served up as a daily side with your coffee.

Recently, Chicago Tribune workplace columnist Rex Huppke declared: “Mansplaining — whether you like the term or not — is real. That’s not up for debate.”

Huppke called it “a slow drip of sexism”. How much is your office environment dripping with it?

What is Mansplaining, exactly?

In The Salon, Benjamin Hart argued that the term “mansplaining” lost its potency, as well as its real utility within gender dynamics discussions, when it became popularly used and broadly defined as a man explaining something to a women in a condescending or patronizing manner.

Hart asserts it’s morphed into an “increasingly vague catchall expression” of “men saying things to, or about, women.”

“Mansplain” is thrown about liberally. Jimmy Kimmel mansplained speech coaching to Presidential candidate Hillary Clinton. The Financial Times recently referred to the EU referendum in the UK as at risk of becoming a “giant exercise in ‘mansplaining’”, due to media domination by male voices. Women called for Trump to mansplain his Clinton “women card” accusation. Even a collection of mansplaining moments shows a diversity of takes on what it is.

Merriam Webster takes a hard line on its specific definition: “when a man talks condescendingly to someone (especially a woman) about something he has incomplete knowledge of, with the mistaken assumption that he knows more about it than the person he’s talking to does.”

Other than a sinking feeling in your stomach and increasing desire to find a conversational back door, what are the tell-tale signs of mansplaining?

One sure-fire sign you’re being mansplained to: you’re not speaking or discussing. Instead, you are being spoken at or spoken over, often for a frustrating duration of time.

Mansplaining carries a trademark air of wisdom-wielding, knowledge-imparting, and time-taking. You may also have the feeling of being verbally cut-across.

Mansplaining, in a two-step conversational dominance maneuver, often follows immediately after manterruption – “unnecessary interruption of a woman by a man”.

A 2014 informal experiment by empirical linguist Kieran Snyder in a tech workplace found that in conversations of four or more, men interrupted at twice the rate women did, and were three times more likely to interrupt women than men. (Women interrupt women, too.)

Women were most commonly intrusively manterrupted on panel discussions, although men weren’t “aware” of doing it. Less than 1/5th of all women’s interruptions of anyone were intrusive.

Mansplaining is not a direct question followed by a direct explanatory answer. That’s just explaining.

Mansplaining is more of an unsolicited espousing of lengthy information and proffered opinions, which seeks to ensnare you in its immanent glow of intelligence, and which may or may not follow a question.

In the Chicago Tribune article, Elly Shariat, founder and CEO of shariatPR, tells of a former boss who pulled her aside to advise on the health implications of her shoe choices, for example.

3) Major assumptions are at play

The biggest thing about mansplaining is that it’s based on a culturally embedded assumption. At the core, men often assume they know more or better than women, and culture mirrors this.

Although she didn’t coin the word itself, mansplaining’s popular origin is attributed to Rebecca Solnit’s 2008 essay entitled “Men Explain Things to Me”, in which she tells about a cocktail party experience where a man asked her a question about her writing and then interrupted her to tell her at length about a very important book that she should read – which turned out to be her book, and he hadn’t even read it, just the review.

Solnit wrote, “Men explain things to me, and to other women, whether or not they know what they’re talking about. Some men. Every woman knows what I’m talking about. It’s the presumption that makes it hard, at times, for any woman in any field, that keeps women from speaking up and from being heard when they dare; that crushes young women into silence by indicating, the way harassment on the street does, that this is not their world. It trains us in self-doubt and self-limitation just as it exercises men’s unsupported overconfidence.”

What can we do about it?

No matter how narrowly or broadly you define it, mansplaining reinforces a power imbalance. It reinforces the male domination of meeting conversations and rewarding of men for talking more.

Here’s a thought: interrupting mansplaining might be a necessary, career-building skill.

In her experiment, Snyder found that women interrupt less and very rarely interrupt men (only 13% of the time). But which women were entirely responsible for that 13% of interrupting men? The only three senior women in the study – who all interrupted men (as well as women). In fact, these women were three of the four biggest interruptors in the study.

Snyder wrote, “The results suggest that women don’t advance in their careers beyond a certain point without learning to interrupt, at least in this male-dominated tech setting.”

The most empowering thing women can do when faced with mansplaining?

Put acquiescence away. Interrupt this nonsense, and be heard.