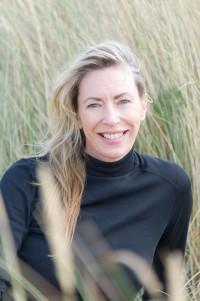 New York Times and Sunday Times bestselling author Linda Davies wrote this guest article for theglasshammer.com about how she succeeded as an investment banker and then made the leap from corporate life into full-time self employment as a novelist. This is surely a dream that many people share, but is it really that easy?

The GH: Linda, tell us about your career in finance in the city of London?

Linda: When I first stepped into the hallowed streets of the City of London as a callow twenty one year old graduate fresh out of Oxford, I only ever intended to stay for a few years.From when I was a little girl, I had always wanted to be a writer.Corporate life was a means to that end.

In the City, I had two objectives: one was to make as much money as I could legally in as short space of time as possible, and the second was to prove a point to myself and whoever I fancied might be watching.

The City lured you in with the promise of money but it had another USP that appealed to my young and foolish ego: it prided itself on its hair-cloth-shirt toughness, insinuating that you had to be something of a superhero to survive let alone thrive.

There weren’t any super heroines back then in the American investment bank I went to work for.I was the first woman they employed in European corporate finance.Back then, the glass ceiling was at entry-level and I was thrilled to have smashed it.
The work was an intellectual challenge, but the environment was not a fit for me..

Dealing in astronomical sums of money and being lavishly rewarded can be very corrupting, can lead you to think that you deserve the money, that you are entitled to the money, and that you need that amount of money to live a satisfactory life.

I had a plan and I stuck to it. I deviated occasionally and allowed myself indulgences, but the greatest indulgence of all is time and money buys time in my opinion. After seven years as a leveraged buyout and high-risk specialist, it was time to leave.

I had for several years been searching for a plot, and then, one day, I was sitting at my desk, feeling particularly annoyed with my boss, and wondering idly how much trouble I could cause financially, when the bare bones of a story leapt into my head.

It was a totally illegal plan, it would have made a lot of money, but I like to sleep easy at night, and so instead of doing it, I wrote about it. After six months, I knew that this plot could turn into a book.

I was young, free, and single. After seven years I had saved up enough money. It was time to take a risk, to turn my back on my large six-figure salary and bonus, and the status and security that went with it.
I remember the day I handed in my notice. I felt as if I had jumped out of an airplane without a parachute. It seemed like I was in freefall for weeks afterwards. It was a gloriously heady feeling.

The GH: Ok, so that is definitely a moment that some people would consider scary, possibly even risky! How did you go from quitting your day job to realizing your dream?

I wrote for 18 months, refining the plot until it was time to test the reality of my dream. Through a friend of a friend I was introduced to a literary agent. I went to see him, handed over my manuscript. It was a Thursday.

Then in some strange feat of serendipity, a kind of fortune favors the brave moment, a bizarre thing happened over the weekend.

About four months earlier, I had written a speculative letter to the Sunday Times, where I suggested writing an article about my experiences in the City. I was contacted a few weeks later by the editor of the Sunday Times Magazine who said absolutely, yes please, do write an article for us about what it is like to be a woman in that extremely testosterone-fuelled environment.

I had no idea when the article would appear, but, as luck would have it, it came out, covering six pages, on the Sunday immediately following my Thursday meeting with the literary agent.

This produced two rather wonderful and wholly anticipated results: one, an auction ensued amongst a number of publishing houses to buy my novel and two, I was contacted by about six different highly prestigious and successful financial boutiques and offered jobs (I have to say at this point, nothing in my article suggested that I wished to return to finance.)

This was 20 years ago.The book was Nest of Vipers – an adrenaline fuelled insight into the life of an investment banker, Sarah Jensen, who was recruited by the Governor of the Bank of England to go undercover in her investment bank to investigate an insider-trading ring that stretched from a central bank to the Mafia. Unbeknownst to her, she was also working for MI6.The novel went on to be published in over thirty territories and to be optioned three times for movies.

I am now on book number 13. Jumping out of my investment banking career had been a risk worth taking on every level.

The GH: What advice would you give our readers today?

I suspect that a number of you reading this are contemplating or have contemplated leaving the corporate system and so my advice to you would go along the following lines:

* While you are inside the system, be wary of buying into it and into the lifestyle to match it if you are intending to leave it, particularly in highly paid professions such as investment banking. Investment banking is a great way to amass money, but only if you do not spend like an investment banker.

* Many women in corporate life can still in some ways feel like outsiders. As the first woman employed by Bankers Trust’s European corporate finance department, I was patently and obviously an outsider and always felt like one. That was a real advantage. Relish and use that feeling. It gives you perspective, the ability to stand aside and look at your position and your broader options in the outside world and gives you greater flexibility in terms of the choices you might go on to make. There is no wonderfully set career path stretching out ahead of you. You have far greater freedom to make it up as you go along.

It’s been shown in personality tests/behavioral profiles that entrepreneurs are overwhelmingly outsiders. Being too wedded to corporate life can blunt your desire and ability to take risks with your career. Being an able quantifier of risk for your organization often does not extend to being able to quantify risk as regards your own life.

I’m a contrarian by nature and it’s led to some odd but potentially beneficial opportunities: the first was my Sunday Times article which I had thought was a very public exercise in boat-burning, in deliberately removing any fallback position, any hint of a Plan B should Plan A fail.I believed that the very absence of a Plan B would make me work harder to ensure Plan A worked!

How contrary was it then that my article and my attitude produced all these offers. I’m sure had I gone knocking on their doors the week before those same doors would have remained closed to me.

Being an author these days really means that you are an entrepreneur so a lot of my experiences and the lessons I have drawn from them can be applied across the spectrum to different areas of entrepreneurship besides writing.I hope some of these above might be of help.For those of you who are budding writers here are a few tips that have helped me.

* Write a whole draft before you begin editing.Writing and editing at the same time is a dispiriting and inhibiting process.Just get the first draft down and then you can play around with it.

* Make use of the most current technology to help you.I don’t type really well or very quickly but I have always typed out my novels on my desktop computer.However, just over a year ago, an old friend of mine who is an investigative journalist told me I was mad not to write about the story of my kidnap and detention in Iran.I started to think about it, suggested it to my agent who leapt at the idea.He said, look if you can write it in the next two months, we can publish it at the same time as your latest thriller, Ark Storm, which was due to be published nine months later.

Two months is a tight deadline, especially for someone who cannot type very well.So I did something I had been contemplating for a while.I installed Dragon Dictate voice recognition software on my computer.And I dictated the book, the memoir, which would go on to be called Hostage, Kidnapped on high seas, the true story my captivity in Iran.And I discovered a very welcome side benefit.I had wanted this memoir to sound much more intimate than my novels. I wanted it to read as if it were a tale being told at a dinner party perhaps to someone I had just met, one of those rare and special human beings who manage to elicit the most candid of confessionals.

And it worked. The act of dictating bypassed the overthinking intellectual part of my brain and turned out to be some of the best writing I have ever done. Instead of having to do my customary ten drafts I did only three.

If you are writing Instead of dictating, still read your work aloud. You will pick up many infelicities and awkwardnesses in the writing that silent reading and editing just will not detect.

We all know the maxim, write what you know, but also research and use what you know. Dictate great snatches of fabulous dialogue that you have heard in the workplace into your phone and then email them to yourself to save them and use them.This hones your ear for dialogue and also keeps fresh the characterizing lexicon of whatever workplace you happen to be in and will render your book much more immediate and real to readers.

Remember, everything is material. As I found during my seven years in the City, there’s always a silver lining.

To find out more about Linda and her novels and her memoir, Hostage, please see: www.lindadavies.com
www.longbowgirl.com