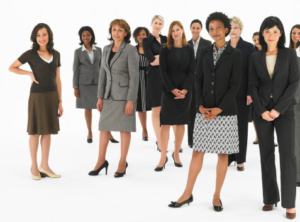 Edinburgh is Scotland’s financial and political capital, and everyone who has been following Scottish politics has no doubt noticed the central role that women have recently been playing in the spotlight of the Scottish independence referendum.

More than half of Scotland’s most powerful politicians are women, and they are leading parties in every part of the political spectrum. In fact, three of the five parties that hold seats in the Scottish Parliament currently have a female leader or co-leader, and 45 of the 129 Members of Scottish Parliament are women. That’s 35 percent. In contrast, women make up only 23 percent of the British Parliament and hold 18.7 percent of US congressional seats.

What about the private sector?

Scottish women are well represented in Scottish politics, but have they found success in Scotland’s private sector, as well? Based on data from the 2014 Davies Report, Scottish FTSE 100 firms have an average of 24.3 percent women on their boards, while the average for the entire FTSE 100 is 20.7 percent. The larger sample size on the FTSE 250 gives us 18 percent women on Scottish boards versus a 16 percent average across the index. Similarly, women make up approximately 18 percent of the boards on the S&P 500 index of large US firms.

Why is the percentage of women on FTSE 100 boards so much greater than their representation on the boards of FTSW 250 companies? The threat of continental-style quotas in 2011 led many large British firms to increase the percentage of female directors on their boards based on voluntary targets. In fact, the percentage of women on FTSE 100 boards increased from 12.5 percent in 2011 to 20.4 percent in 2014. However, that does not explain the gap between the Scottish and UK averages; especially since the Scottish economy is tilted toward finance and energy.

A quick look at the boards of Scottish firms reveals that women are far from invisible in the Scottish financial sector, even below the level of the major indices. Fiona McCain is Scottish Friendly’s Chief Executive. Debbie Crosby is the Executive Director of Clydesdale Bank. Clare Bousfield is CFO of AEGON UK, formerly Scottish Equitable PLC. At TSB, which recently separated from Lloyds and is based in Edinburgh, three of the nine board members and five of the 11 people on the leadership team are women.

With so many other countries and regions struggling to increase the representation of women at the board level and in government, what has been the secret to Scotland’s (relative) success?

It is possible that Scotland’s public sector commitment to gender equality has been filtering through to the private sector. Scotland has 36 percent female directors on its public boards, and that may be creating a pool of qualified women who can serve as directors in the private sector.

It’s also possible that the recent shake-up in the financial sector highlighted the need for change. In 2011, public confidence in banks and the financial sector was very low, and the whole industry has been reorganizing since the financial crisis. Not only are boards with a high percentage of women associated with financial success, women may also be positive influences on corporate ethics. It makes sense that women would be recruited onto the boards of banks and other financial institutions to help bring back both trust and profitability. Half of Scotland’s FTSE 100 firms are in banking and the financial sector.

With independence from the UK now on the back burner, will Scotland continue to be a leader in gender equality in politics, and will the above average number of women on Scotland’s corporate boards continue to rise? If the Scottish government stays active in its commitment to gender equity and women continue to be highly visible in leadership roles, then the future looks promising.