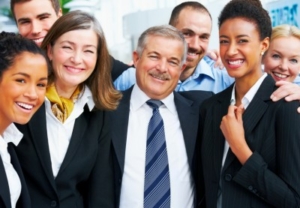 Similar to a sense of confidence, self-efficacy is the psychological term used to measure a person’s belief in their capacity to achieve their goals. Research shows that a person’s degree of self-efficacy has a significant impact on the kinds of goals they choose, and the amount of effort and persistence they put toward achieving those goals.

The most interesting aspect of leadership development models that use self-efficacy as the meter for determining a person’s success, especially as related to the glass-ceiling, is their shift in focus from external barriers—like sexism and stereotyping—to internal factors, like our own personalities. Whereas none of us can control the world around us, we are all masters of our own perception. This means that what we believe about ourselves, as women, what we are and aren’t supposed to do, has the primary influence over our ability to lead and achieve. A 2003 study on the influence of self-efficacy on the glass-ceiling phenomenon, reveals some evidence that it is women themselves, and their own self-confidence, that is holding them back.

Interestingly, the study concludes that a majority of senior managers gave the reason that women were not ready for advancement because they lacked the necessary confidence when they chose not to promote the female candidates.

Wells (2001) reported that the only competency on which women managers scored lower than men was self-confidence, and that this lack of confidence was self-limiting. When asked about their career aspirations, the women were looking only about two positions up from their current one.

The researchers are clear that it is not their intention to blame women, as the external barriers are real. And, sex-identity is determined largely by the ideas and messages we receive as children, but once we are adults, we do have the capacity to determine our own thoughts and feelings about who we are and who we want to become.

Lisa Falzone: A model of confidence

For Lisa Falzone, co-founder and CEO of Revel Systems, the rise to the top was a natural progression from the gender-neutral environment of women’s athletics to leading a brand new tech-company.

As Falzone was only three years of out of college when she began the work of designing an iPad point of sale system used by some large chain restaurants, she says she “never realized sexism” and was “oblivious to it, in a sense.” As a college athlete, Falzone was used to competition, and she felt that her team worked and played just as hard as men. She says that she never questioned that the business world would be any different. While she acknowledges that the venture capitalist landscape needs to change, and that the only other women she sees there are “super models” at the secretary’s desk, she also says that, “women just need to try” if they want to be more successful. She comments,

“Women are more prone to fear because they need to be encouraged more. I think it’s just a matter of time before women can see themselves as leaders and entrepreneurs—they haven’t seen other role models. The investment landscape has to change as well; the VC’s like to invest in people who are more like them. For some reason, VC’s are not getting women into being partners.”

Falzone, on Forbes’ 2014 list of the Top 30 Under 30, is young enough that finding her own identity, as a leader, was a natural part of her personal development. Falzone’s story is an inspiring representation of how much a woman can accomplish when she is not bogged down by worrying about how others might view her, or how she is supposed to act.

Anthony Bandura’s original research defining self-efficacy offers a variety of exercises for increasing a person’s sense of their ability to achieve their goals. Some of these are:

Evaluate your success as you go

Each time you achieve a goal, take the time to acknowledge how you got there and the fact that you actually did what you set out to do. Even small accomplishments count in getting you further toward your final goal.

When we see ourselves as successful people, we engage our brains in the process of helping us get there, instead of wearing us down with negative thoughts or insecurities. Allowing ourselves to imagine what we want to be also helps us plan the smaller steps we need to take to get there.

Everyone experiences feelings of self-doubt. The danger comes when we allow these feelings to define who we are. When we view insecurity as a natural part of the growth process, we are better able to accept them and move on.

Honing your ability to determine your mood is key. Remember that song that used to have you singing in traffic when you first got your license? Put it on your morning playlist. Do you love chocolate but limit your indulgence? Maybe it’s time to step up your exercise and feel happier by allowing yourself to have more of the things you enjoy.

You know that friend who always was to remind you of that time in middle school when you didn’t get asked to the dance? Or, do you have a hard time saying no to that work colleague who loves to invite you to lunch and complain about how nothing is every working out for her? Well, these people are not likely to send you the encouraging messages you need to be your best self. Let Negative Nancy find a new friend while you are out with that new mentor you’ve been meaning to find.