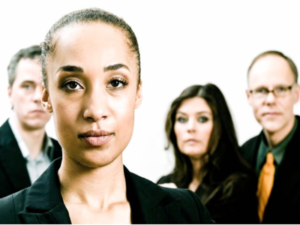 “Show me how to run, like a girl.” On Sunday February 1st, millions of Superbowl viewers watched a 60-second ad from Procter & Gamble’s Always campaign, which powerfully demonstrated that doing something “like a girl” implies weak and wimpy performance is an association girls learn. From puberty, girls become divorced from their self-confidence and evidently self-perceived ability.

Calling the ad “groundbreaking” for its placement in the Superbowl, the Huffington Post stated it won kudos “for changing the conversation about what it means to run, throw, and do pretty much any activity ‘like a girl’.” A Washington Post blog referred to it as a “PSA for all womankind” – summing up what was revealed by how young girls behaved in response before they internalized the negative gender stereotype of weakness:

If negative gender identification contributes to dropping a female’s self-confidence by the time she hits puberty, it’s no wonder that marrying the roles of “woman” and “leader” too often creates an identity conflict for professional women.

Researchers Alice Eagly and Anne Koenig stated in a Footnote article last year that while it’s slowly changing, “the characteristics people typically associate with leadership are often stereotypically masculine” – especially when it’s men making the association. A prevalent gender stereotype, which it has been argued in the Financial Times, business schools perpetuate.

Add “perceive themselves” to that dynamic, and the case for internal conflict becomes clear – leaving women in a bind when they attempt to be a leader in a male-dominated environment where their gender is a perceived liability.

From the INSEAD working paper behind the report, identity conflict is when women perceive an incongruity between their gender and professional identity. The study proposed that when women leaders see the identity roles of “woman” and “leader” as holding conflicting norms, meanings, and demands, they feel at odds inside while trying to live up to the standards of each of them, and this creates the feeling of inauthenticity and internal problems.

The research found that especially in male-dominated organizations, women leaders experience significant identity conflict, which increases stress, decreases a sense of well-being, and turns leadership into a duty they have to persist with rather than a joyful and motivating role. These women felt under pressure to conform to male-associated leadership qualities and expected behaviors, at a sense of violating their female identity.

The researchers propose that women in male-dominated workplaces may struggle to integrate leader into their identity because female leadership is not being legitimized, “For women, the road of developing a self-concept as a leader may be especially bumpy in the environments where women are numerically underrepresented.”

The researchers write, “Our results indicate that in male-dominated organizations, women leaders may be more often ‘reminded’ of the incongruity between their professional and gender roles.”

The research found that what powerfully reduced identity conflict for women leaders is this: feeling positively about belonging to the social group of woman.

The research found, “Compared with women in more male-dominated organizations, women in organizations with proportionally more women held a more positive gender identity and experienced less identity conflict.” Working in organizations where being a woman, and evidently the associated strengths, is seen as explicitly positive left women more motivated to lead.

In simplest terms, what the study found was that women that feel more positive about being a woman feel better being a leader, closing the gap between them within. A significant contributor to that is seeing females reflected in numbers around them.

Embracing our social identity as woman can also help to free us from the confines of stereotypes and perceived incompatibilities.

Drawing from past studies, Karelia and Guillén pointed out that a positive social identity links to a stronger self-worth which can spill across roles and indirectly build self-affirmation. “Therefore, the more positive social identities woman leaders hold, the more freedom they will feel about the way they can lead, and the more likely they will be to develop their own way of leading that makes them feel comfortable and authentic.”

“Leader” and “woman” need not imply an inherent divisiveness, when women embolden themselves to find their own way.

Who defines what it means to lead “like a woman”?

Well, ultimately, you do. Lead.