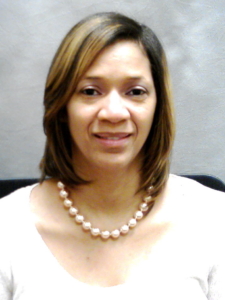 Never accept defeat! Those are the words that have propelled Latrisha Whitehead forward in her fast-moving career, spanning a wide variety of companies and industries.

For just over three years, she’s served in her current role as a project manager with TIAA- CREF’s platform metrics group, where she supports and manages the dashboard development for TIAA Today. TIAA Today Dashboard is a tool that provides near real-time Client Systems data to executives, management, IT, operations and the business to inform them about key platform metrics. These dashboards are intended to provide operational insight to current production performance compared to the peak and average.

Prior to that, she held a variety of business analyst positions in industries that ranged from human resources to finance to entertainment. During her stint in entertainment at Twentieth Century Fox, Whitehead’s position had taken her to California, but she was lured back east by a previous manager from Wells Fargo. Knowing the caliber of her work, Whitehead’s manager asked if she would return to oversee the reporting efforts supporting customer relationship managers and wealth managers.

These many moves taught her one of the most valuable career lessons: to value independence. She says that when she initially moved from her home state of North Carolina for a consulting job, she was worried that she would lack support. “My mom has always been my biggest supporter and it was hard to think about her not being close by. But I knew I just needed to get used to being on my own, and once I gained that confidence, I not only survived, but thrived. I began to see myself in a different light.”

Inspiring Confidence in Others

That confidence she found in herself not only shaped her career positively, but it also impacted others’ views of her. Along the way, she’s worked with a wide variety of managers, all with different styles and expectations. But one thing she says they’ve all had in common is their complete confidence in her abilities. “That’s probably what I’m proudest of in my career,” she says, “That in every role I’ve had and every manager I’ve reported to, they’ve never second guessed or micromanaged me. They’ve known that I will see the task through to accomplish the goal.”

Whitehead says that before she entered the corporate world, she had the impression that women in in the workplace might not earn the respect they deserved. She had heard stories about women who were ignored or spoken over in meetings and had their opinions overlooked.

Fortunately, that stereotype did not ring true in her case. “I don’t know if it was my personality or the combination of my skills and experience, but I’ve found that no one has ever treated me differently because I am a women,” she says. “When they saw that I was dedicated and results driven, they had confidence in my abilities and my opinion on how we could achieve success.”

That respect has come not just from her managers but her peers as well. Whitehead says that she frequently receives feedback from her managers on positive reports from others in the organization. “It makes all the hard work worthwhile,” she says. Since most of her clients are internal, she appreciates that she can make an impact on the external end user customer through the work that she does. “I’m so customer focused that I appreciate hearing that my role has a direct correlation on our company’s success with our customers. Making sure that your internal customers are supported efficiently gives a downstream impact.”

Every Project Offers A Chance for Success

Part of Whitehead’s job satisfaction stems from her ability to find something exciting and fresh in each new project. From each one, she is able to learn more about the company’s business overall, and get a picture of its direction and how her work relates to aspects that don’t directly involve her.

“My team is always innovating; we have to come up with new and original designs and a fresh outlook for each project.”

She says that a project will often come in two seemingly disparate mockups and her team will pull it together. “It always amazes the clients when we present the finished product, and they find that they can see at one high level something that historically they had to look at in drill-down mode. They think we’ve produced magic!”

Whitehead knows she has been the beneficiary of mentoring along the way, including groups that TIAA-CREF hosts, such as its Women’s Employee Resource Group and a Lean In circle. She actively participates in both, and has found it particularly uplifting to hear and see how other
women are breaking the proverbial glass ceiling.

Over the years, she has seen the benefits of having both mentors and sponsors. She says that it has been impactful to see other women in leadership roles which might have historically been male dominated.

She passes on her valuable experience through her volunteer work with a girls’ mentoring group called Dynamic Youth Mentoring Program where she works with girls, ages 13 – 18, which she knows is a critical time in their development. She and other mentors meet with the girls in group settings, and then one-one-one once a month to do something either fun or educational.

She reports that her current manager is one of the best she has ever reported to, due in large part to the support she receives for both her professional and personal life.

But she looks even farther up to identify a professional role model – none other than First Lady Michelle Obama. “She advances her platform so effectively, but it’s clear that she is comfortable in her own skin.

You can tell that she’s not giving false appearances but is true to herself.”

Off the job, she devotes her free time to healthy pursuits. She has completed a half marathon and is currently training for another one and has completed a sprint triathlon as well.

She is involved with a women’s running group called Sole Society that focuses on women’s health, from eating clean to exercising to helping ward off the diseases that attack women.
“We have so many roles, from wife to parent to worker that we need to focus just on ourselves sometimes.”

Her professional success is intertwined with her running, since with both she makes sure to make measurable and attainable goals, and review them often to ensure she is progressing toward them. “I strive for continuous improvement, and beating myself each time, whether it’s in the office or at a race.”