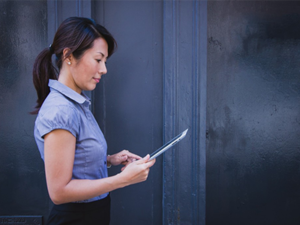 “I continue to be humbled by being in the company of women,” said Cynthia Fryer Steer, Executive Vice President and Head of Manager Research and Investment Solutions, BNY Mellon. “We can learn so much from each other.”

Steer was speaking at The Glass Hammer’s latest career management event “Navigating, Negotiating, and Building Your Strategic Network” last week. Our panelists shared their advice and wisdom (based on their combined “150 years of experience” said moderator Kathleen McQuiggan, President of Catalina Leadership) on how to get to the next level in the investment management industry.

Arnaboldi touched upon a notion several of the panelists discussed. Winding up with a career you love is often the result of a combination of active career planning and lucky breaks – acting strategically on serendipity.

Working for years on the deal side in venture capital, she explained that her career trajectory started to take off when she began looking for a less demanding travel schedule. “It was the early 1990s, and I had two small children, and I was traveling all the time. I had unsuccessfully tried to limit that to the East Coast. Then I got the opportunity to get on the management side of private equity.”

Shifting to management, she’d have a more stable schedule without having to move around as much. The problem, she explained, was that there was no such thing as a real management function in the private equity business at the time, because it was still somewhat of a cottage industry. She decided to go for it anyway. “I decided to take the initiative and look for something new, and that got me into this very early, the building of alternative investments as a business line.”

Seizing opportunities became a theme for the panelists. For example, Buziak explained how she turned a job she hated into a career she loved. She graduated college in 1993 in the midst of a recession. “I took a job at Bear Sterns as a grunt trading clerk – at that point I was just happy to get any job,” she recalled. She spent most of her time shuttling between the firm’s Brooklyn satellite office and its Midtown headquarters. “I was miserable,” she said.

But she got some advice from a managing director at the firm who shifted her perspective on her career. “He said to ‘Turn every opportunity into a stepping stone.’ Figure out how to lead your current role into your next opportunity.”

Looking at her career as a series of opportunities helped Buziak focus on advancement, rather than getting stuck dwelling on the dissatisfying conditions of her first job. “Now I love my job – I am actually excited when the alarm goes off every day. But when it starts to not be that way, that’s when it’s time for change.”

The panelists agreed that networking is important for women in the industry – but approaching it as building genuine relationships is the key. “Networking – that word sounds like a lot of work to me. I try to think about it as relationships,” Rogers said. “It doesn’t have to be calculating.”

She continued, “Generally you’re trying to establish relationships with people above you, people at your level, and even the people who work beneath you. But I would also add that you should be sure you’re also networking with people who aren’t doing what you do.”

Rogers says building external relationships keeps her on top of industry changes and helps her make sure her skills are sharp. “Asset allocation is going to continue to change. You have to play what I call ‘heads-up ball.’ Keep your skills up to date.”

She added, “Generally, if you come at it from a genuine way without being calculating, it will really help you.”

Steer agreed. “Networking is a foreign word for me. To me, it’s just keeping relationships. And never burning bridges – I can’t tell you how small this industry is.” She also suggested that, in an age of text messaging and social networking, a face-to-face meeting is important. “Spending time face-to-face builds your ability to judge people. It’s not hard, but it takes practice.”

Dyott agreed that relationships should be genuine, but pointed out that being strategic is also important when it comes to your network. “If you’re trying to get a promotion, it can be helpful to be strategic making sure you have the right visibility and people know who you are.”

McQuiggan added that networking is about maintaining relationships. “Your network is not your tornado shelter when you’re looking for a job – by then it’s too late,” she explained.

Finally, the panelists discussed the importance of speaking up. McQuiggan recalled how in a previous role at Goldman Sachs, “I used to sit next to my boss – and this was about ten to 15 years into my career – and one day he turned around and asked, ‘What do you do all day?’”

She continued, “That was a wake-up call for me. Just because he sits next to me, he didn’t necessarily know how I was creating value. There were others who were highlighting what they’re doing and coming over to talk about what they’re doing.”

McQuiggan said she began more actively talking about what she was up to – and ultimately that helped her advance her career while being more valuable to the team. “I would recap my week, or provide some interesting tidbits I could share, or think about how I could connect people. What way I could develop and share relationships, and also people would know what I was doing.”

Dyott said speaking up at the right time about a promotion or raise is important, that women should make sure they have the credentials before making a lot of demands. “It’s always easier to get rid of responsibilities you don’t like when you take on other responsibilities and do a good job.”

Arnaboldi discussed an issue many women have dealt with. “I began to notice that if I surfaced a new idea, often somebody would cut in, and by the end of the meeting it was adopted – as someone else’s idea.”

Rogers concurred. She explained that you can be forceful about this issue without being confrontational. The key is to work with others and influence them. “Calling them out doesn’t work – you can work with them to make them more positive.” She said claiming credit by adding to the conversation is something that works for her. “I often say, ‘Working off my idea, we’re going to…”’ By reframing the conversation, you can reinforce that an idea was yours in a productive way.

Steer added, “And as you get more senior, collegiality and teamwork is what rules the day.”