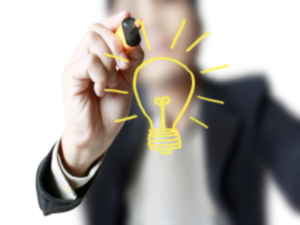 Marked by an infectious enthusiasm, Katherine LaVelle, is a managing director at Accenture Management Consulting who leads that practice for the firms’ North America capital markets clients. She is an expert in leading corporate workforces through mergers and acquisitions, particularly in the financial services arena. “I’m passionate about anything and everything that makes people more effective in their jobs,” she said.

Eighteen years ago, after obtaining her B.S. from Arizona State University and then an MBA from Georgetown, LaVelle learned about Accenture’s nascent change management practice – and knew she wanted to work there.

It’s been the right fit, said LaVelle, referring to both Accenture and particularly to her work in the financial services industry. She explained, “It’s an industry structured around two things: people and technology. To build the most effective workforces, companies have to invest in those two things – and that really appealed to me.”

Last year’s unprecedented surge of M&A activity is not expected to slow down, she said. And according to LaVelle, who has worked on some of the world’s largest (and longest) global mergers, M&A is as much a people-issue as it is a financial one. She explained, “Companies that have not produced a clear picture of what their culture will look like rarely meet their financial targets in the first year after a merger.”

She continued, “A deliberate and defined plan for how you will build effectiveness into your new team is really important, and cannot be bypassed.”

LaVelle shared her wisdom and tactics on maximizing effectiveness while blending cultures – for senior leaders, managers, and employees going through an M&A transition. Here’s her advice.

Employees going through a merger are often focused on one thing, she said. “What does the future org chart look like?” But there are more significant issues that leadership must address to achieve a smooth transition.

“First, be very clear about what the ‘merger milestones’ are. What decisions will be made? What are the dates? When will you communicate changes? And second, for every merger decision you make, ask ‘what is it going to mean to the people I am communicating to?’ Think about those impacts.”

“Research shows that women are usually faster and more effective at bringing together high performing teams – which is what needs to happen in this situation. It is so critical in a merger that a team really works as a team, rather than a collection of individuals,” she explained.

“Mergers are so fast and furious – it can be exhausting. My advice for women going through a merger is the same advice we follow at Accenture, and that I like to extend to myself as well: make sure you are bring your best self to your clients every day. How can I be the best I can be? What does it take on a very granular level?”

She continued, “Mergers can be draining and challenging. That bit of the unknown requires finding support sources, like experts who have previously been through merger integrations. It’s good to be able to draw on them.”

Advice for Managers in an M&A Transition

LaVelle said the most important thing managers can do during a merger is communicate. “Communicating who’s on the team is the first step. You’d be surprised how often that isn’t communicated. But you have to be clear about that,” she advised. “Then, keep on communicating to the point where you feel you’re becoming redundant.”

She said that while diversity is important, it can also be a challenge to unify different strengths and backgrounds. She said, “For example, 60% of mergers last year were cross-border mergers. Geography is important. A diverse team plays to individual strengths – take the time to invest in your team getting together and bonding. This can be difficult, but important.”

Maintaining enthusiasm and energy through a lengthy merger can be another challenge, she said. LaVelle recalled one of her proudest achievements – helping deliver one of the world’s largest mergers in financial services with a four year integration period. “To maintain energy and momentum through that uncertainty, and keep the pace globally with a group of people who spent years not knowing what was going to happen, was a huge challenge. It was fascinating and thrilling. But that’s one of the things Accenture does best – work with complex challenges.”

LaVelle said she is energized about what’s coming in the M&A arena. “The merger environment is unique and unprecedented. Valuations are depressed which make acquisitions highly attractive. 2010 saw a record number of M&A deals.”

She continued, “But while prices are low, the average deal size is going up. Bigger M&A projects are being undertaken. So that means we have the highest number of deals, and the largest deals. And on top of that, they are getting more complicated because of the increased regulatory scrutiny, and an increase of cross-border mergers.”

“So there are challenges like we’ve never seen before – and there are great opportunities,” she added.

In Her Personal Time

LaVelle said that outside work she loves to cook and to host dinner parties for friends. She also enjoys reading – noting that she’s currently working through No Angel, an ATF undercover agent’s account of a federal investigation into the Hells Angels motorcycle gang. She also cited What Got You Here Won’t Get You There as a favorite to revisit. “It’s important to me to be able to just curl up with a book and have some down time,” she said.

Today The Glass Hammer is launching our new column on thought leaders – shining a spotlight on women at the top, by giving them a platform to share their industry expertise.