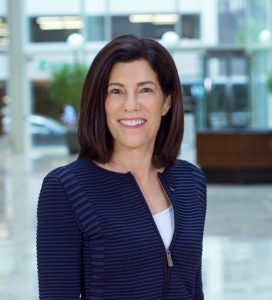 There’s a common phrase about leadership that I believe is often misunderstood: great leaders are born. While it’s true that there’s undeniably talented people in the workforce, promotions and raises don’t just happen. It takes dedication, focus and hard work. And more often than not, your colleagues whose performance appears effortless are often working hard behind the scenes to develop their skills and improve.

When mentoring young professionals, I like to start with two important and accessible leadership lessons that I learned from the New England Patriots star quarterback, Tom Brady.

One of my former CEOs called me and said he needed me to represent the bank at a fundraising event – a football scrimmage, featuring some celebrity guests – to raise money for a great cause. While I love athletics, I had never tossed a football around, and participating in a football scrimmage was a bit out of my comfort zone. But my boss encouraged me to give it a shot, and I said, “yes.”

Later that day, I arrived at Harvard Stadium, and as I entered the locker room to prepare for the game, I quickly realized that I was surrounded by professional football players from the New England Patriots. And then, to top it all off, Brady walked to the front of the room and gave us all a little pep talk. It certainly was not the afternoon I expected when my boss casually asked me if I wanted to attend an event on behalf of the bank. I learned my first lesson.  Say yes to an opportunity even when it’s outside your comfort zone.

Brady went on to explain that he would be the quarterback for both teams and would pass the ball to the young adults whom this charitable organization helped support. Minutes before the end of the first half, Brady looked my way and said “Maria, this next one is headed to you.” As I started to plead with him to find another target, he fixed me with a rather disapproving look and said, “Hi, my name is Tom Brady, and I’m known for being a pretty good quarterback.” He shook my hand. “I usually can get a football to land where I want it to go. Will you trust me on this?  I know you can do it.”

That’s when I learned the second lesson of the day: even if you’re nervous, don’t be afraid to say yes and believe in yourself. It would have been a missed opportunity if I had said no, and a decision that I would have regretted years later. I am thankful that I was in the presence of a quarterback who knew what was best for the team, believed in me and encouraged me to try.

And you know what? I ran down the field and Brady hit me with a perfect pass. I caught it, kept running and scored a touchdown. Greatness can be found outside of your comfort zone, but you have to be willing to try.

Give your team confidence.

Brady believed in himself and showed me that I could trust him. And together, we were able to succeed.

In the following weeks, I realized there was a hidden lesson in this story that was not obvious. Brady showed me that to get the most out of your team, it’s important to remind them that you can deliver. You’re the quarterback who can put the ball right where your team needs it to be. Or you’re the team lead that can provide your colleagues with the confidence to run down the field, catch the ball, and score their own touchdown. There are many missed touchdown opportunities because we forget to see the whole field, and understand the impact we can have on the final result by encouraging our colleagues to live up to their best potential.

Leadership lessons can seem more accessible with the lightness of a sports analogy, but stepping outside of your comfort zone isn’t any easier on the football field than it is in business. The core lesson remains the same – a great opportunity isn’t going to land in your hands or in your inbox if you aren’t engaged and working to improve every day.

To find more happiness at work, say yes more often, step out of your comfort zone and encourage your team to do the same.