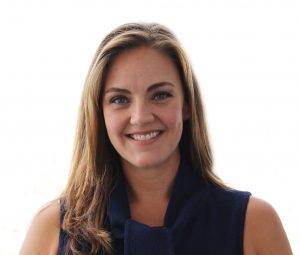 “Sponsorship is a key thread in my career, specifically in how I was thought of and connected with people that ultimately became my managers. Sponsorship to me went on to mean trust in me and my character and knowing that an introduction is one thing and the rest is up to you. Sponsorship can really set you up for success in your role, so when you have it, take full advantage.”

Beth started her career in 2000 with a job in advertising, at a Madison Avenue agency called DDB, known for its work with major brands like Hershey’s, Johnson & Johnson and Pepsi. The Bank of New York was her primary client and she worked her way up from group assistant to account executive. Beth was recruited by them, finalizing the switching of her path to  the client side early in her career.

Beth relays how the early part of her career journey showed her how sponsorship can work, since the person who hired her in her first financial services job, saw her potential and continued to advocate for her once she was inside the bank. She comments,

“At The Bank of New York, I cut my teeth in financial services with RFP writing and some course work, then made my way into the corporate marketing organization, supporting and working on campaigns across several different lines of business including custody, alternative investments and institutional banking.”

After a short lived stint in advertising Prime Brokerage at the ill-fated Lehman Brothers, she moved into marketing in the financial services technology industry,  mostly under the umbrella of FIS (then known as SunGard). The string of experiences there of corporate marketing and communications, demand generation, re-branding, and thought leadership creation led her to Genpact in 2014.

At the start of 2019, she made a major move, inside Genpact, going from marketing to strategy in the risk practice, focusing on financial crime compliance. The remit expanded to include all risk services, whether advisory and consulting, analytics or financial crime.

Today, she is the Strategic Initiatives Leader for Genpact Risk and focuses on engagement with key industry analysts and building out a risk & analytics advisory council. She comments,

“I’ve gone from leading small to mid-size, junior to mid-level, co-located, diverse, international teams to being an individual contributor that works closely with leadership. I appreciate the independence and the massive change in dynamic as I realized I enjoy a seat at the strategy table. It is good to understand what is important to you.”

Right now, Beth is thrilled to be scaling up Genpact’s risk & analytics advisory council and she is taking a program she built from a 1.0 to a 2.0 version with the full support of practice and company leadership. She is now focused on risk in financial services, in particular, regulations for banks and other companies handling payments; controls concerning financial crime compliance are the focus, albeit indirectly, of the work of the practice team. She adds,

“With a deep dive into this industry, the work I am involved with ultimately combats terrorist financing, human trafficking, and other crimes spawned from abuse of financial institutions. There is a virtuous nature to the work at the end of the day that I’m proud to be part of.”

Beth states that she is proud of the fact she has been recruited for each professional role she has held, including a few jobs that were created expressly for her. She comments that she believes that doing a good job and then keeping in touch with her clients, colleagues and managers is useful,

“I always keep up relationships, even if it’s using LinkedIn to stay connected to sponsors of mine. I have learned and have benefited from the value of networking. At the end of the day I believe it’s based on having strong rapport with my managers, colleagues and other stakeholders. More than once, a past connection/work relationship helped secure a new role for me when the new hiring manager sought out an endorsement for me and my character and work ethic.”

Thinking about advice to her younger self, Beth reflects that she singles out one thing: to be mindful that those around us have all had their own path to get where they are. She opines that respect is a valuable currency and establishing rapport with those you work with, especially outside your immediate team is valuable and always worthy of your time.

“You never know when you may find yourself in need of a sponsor, ally or someone to coach you – whether situationally or otherwise. Managers that spent months recruiting you can leave unexpectedly and you need to stand confidently on your own inside a new organization, as soon as possible.”

What have you learned that you want to share?

“My biggest learning moment was realizing frustration was stemming from boredom, when I was no longer learning in my role; that realization gave me the courage to seek out a new role and a new way of working entirely. I now realize I need to create and to start things and make them real; I prefer to be part of the change.

“Waldman also talks about pushing back, saying no and being authoritative without being interpreted as overly aggressive, as common challenges she has had and seen in others. Further to that, often being the only woman or one of very few women in the room is the reality but it doesn’t have to be a barrier. She offers,

“Don’t shy away from some level of self-promotion and showcasing your successes. You have to have them together (like a show reel) to access when needed.” She adds,

“Lead with your gut and your knowledge; don’t be intimidated if you can’t check every box of experience. Be realistic that no one is a rock star at their job on day one.  A good attitude and willingness to get things done will serve you well. Have  confidence in your own ability.”

Waldman admits that earlier in her career, any time she saw woman in a leadership position in the many financial institutions or other large companies she has worked for, she couldn’t help but gravitate towards them as she found female role models helpful.  She wants to pay it forward herself and is currently part of the Women’s Leadership Program for AVP level women across her company of nearly 100,000.

“There are over 300 of us to start, with 30 ultimately making the final phase into a VP promotional pool of candidates. It’s my second leadership course for this band level at Genpact. In prior organizations, I was nominated for and took full advantage of various leadership and other programs. More than once I was sent to presentation-focused classes, where you had to present on camera and live in front of a room of people you were meeting for the first time.”

Outside of work, after a 30 year hiatus, Beth is playing piano again, taking lessons with her daughters who are eight and six. She enjoys travel and recently, she and her husband made it to Red Rocks in Colorado to see live music and states that her ultimate adventures are those with their children; skiing with her family being is her latest and greatest proud parent moment.