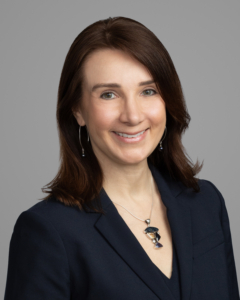 “You cannot map out your career; you have to respond to opportunities and obstacles as they appear,” says Katten’s Kate Ulrich Saracene.

While it helps to have goals, trying to adhere too closely to a roadmap can actually make you feel frustrated and overwhelmed. But being flexible can open doors, she finds.

For example, three years ago, she never imagined she would be a practice group leader for a law firm headquartered in Chicago while working remotely from her home in Rochester, New York. In light of the non-traditional path she took on her journey, her achievements shine even brighter.

Forging Her Own Way

What Saracene has found to be beneficial is the flexible work arrangement she has at the firm that allows her to work remotely from upstate New York where she lives with her two teenage children. She commutes to the Chicago and New York City offices a little less than half the time. “While my workday flexes from 6 a.m. to midnight, it has enabled me to be a better parent when I’m home,” she says.

The arrangement has been so successful, and has since attracted another partner to join her team at Katten. “Because the firm has been so flexible, I’ve been able to recruit talented people whom I’ve worked with in the past, allowing the group to grow organically,” Saracene said.

As Saracene puts it, her career path from human resources professional to leader of Katten’s Employee Benefits and Executive Compensation practice was not typical.

After graduating from Cornell University with a bachelor’s degree in industrial and labor relations, she worked for Xerox as a labor relations specialist in Rochester, NY. When she was accepted to law school a few years later, she transferred to Xerox corporate headquarters in Stamford, Conn. and worked part-time as an employee benefits analyst while attending Yale. Once she received her law degree, she joined a law firm as an associate, counseling clients on labor and employment laws and drafting policies for employee handbooks among other responsibilities. Following the birth of her first child, she returned to Xerox for four years in a human resources position, enabling her to work part-time while maintaining a manager title.

Saracene never saw the job switch as a setback in her career; in fact she believes this stint working in corporate employee benefits has been advantageous for her clients, as she better understands their needs. “I have walked in their shoes and speak their language, and I understand the operational things they need to be aware of and the consequences of my advice,” Saracene said.

She continued to work part-time for 13 years, eventually finding her way back to law as a an employee benefits attorney at her former law firm and serving as counsel advising clients on the complexities of laws and regulations for retirement, welfare and compensation plans. This transition to a tax counseling practice, from her prior legal stint as a labor and employment counselor and litigator, was the key that allowed her to move back to law firm life but with a schedule that was more predictable and manageable while she raised young children.

When the Affordable Care Act was signed into law in 2010, Saracene became quite familiar with all the regulations, requirements and provisions of the legislation, turning herself into an authority on the topic who was regularly quoted providing legal analysis to national media publications and became a sought-after speaker on the subject. Saracene stepped off the partner track for three years after transitioning back to private practice, but asked to be put back on in 2012 and within 18 months was named a partner. She joined Katten in 2017.

And therein lies a key to success that she shares with young associates: One path to moving up is to find a new area of the law where you are on equal footing with everyone else despite their experience, learn it and own it. If you are willing to tackle something new and master it, you can be an invaluable resource to your firm and clients.

Embracing Well-Being in her Personal and Professional Life

Over the years, Saracene has seen the importance of health and wellbeing. After becoming an avid yoga practitioner and then a yoga and meditation instructor, she has found ways to incorporate the benefits of those practices into the legal community.

For example, she is working with the local bar association on teaching mindfulness, where participants can earn ethics credits as she focuses on the brain science behind it and how the techniques can create a more successful lawyer — more calm and composed, able to think more deliberately and better manage clients and their expectations. “It’s become a passion of mine that I have been able to share with the law community and Katten specifically,” Saracene says.

Saracene has become integrally involved in launching a firm wellness initiative called Katten Well-Being 360 to provide attorneys and business professionals with resources aimed at encouraging greater attention to mental and physical health. She is vocal about the needs of attorneys, and that initiative now brings wellness-related items like aromatherapy stress balls to recruiting events, and she recently led a meditation session at a new partner orientation. “We are trying to work it into the fabric of the culture,” she says.

Regarding other aspects of wellness, she has learned that you have to think carefully about how to commit your time and therefore recommends outsourcing tasks that may not be a high priority or have a direct benefit for you personally doing them. For example, she is happy to have someone help around the house or to run errands, but she’s more reluctant to give up driving her kids to school or activities as that can be important together time.

“It’s always going to be challenging for moms to try to be the best parent possible while still being the best lawyer possible. It requires sacrifice, but the key is to look at things over a long horizon,” Saracene says, noting that there were times when her kids have seen her less because she’s more involved in her career, and times when she’s been less focused on her career because of her children. Her new remote work arrangement has helped her strike the right balance.

And as they get older, she finds new ways to be present in their lives. One of her favorite “escapes” has been combining philanthropy with travel. Volunteering with the International Fund for Economic Development (IFED), she has trekked to remote areas — introducing after-school programs in Paraguay and helping coordinate efforts to improve conditions at an orphanage in Bali — through a program championed by a former mentor at her law firm and his wife that they took on as a retirement project. This year, her son plans to join her on an IFED trip. “Everything comes full circle. He helped me build my career, and now his good works are allowing us to give back together.”