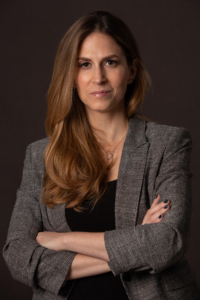 Erica Klinkowize began her career in finance at Goldman Sachs in 2003 and for over a decade, she had various roles that focused primarily on Liquidity.

In July 2014, she made the leap to Bank of America and continued to work in the Liquidity space within Treasury until April 2019. After almost 20 years into her career, Erica shifted her focus from Liquidity and Treasury to Global Markets at Bank of America.

“I have spent the past 8 months building out the central Fixed Income ETF trading desk. While it was an extremely difficult decision to switch directions as it’s easier to stick with what you know, at the heart of it, this was a, likely, once in a lifetime prospect that I could not pass up. The opportunity to build out a new trading business at a world-class organization does not come along very often. To be offered the opportunity to co-lead the effort was, and still is, an honor.”

She comments that this experience has added a whole new set of skills to her personal and professional toolkit and has reinvigorated her for the challenges that lie ahead.

Klinkowize, at the exact time of the financial crisis, began the Executive MBA program at Columbia Business School while working in the Securities Division at Goldman Sachs. These simultaneous experiences had a powerful impact on her and she comments that the combination of the two during this tough time “further framed my worldview and gave me a lasting perspective as I experienced the crisis at the forefront and, further, saw the crisis through the eyes of my classmates, over 50% of whom did not work in Finance.” During the crisis, Erica was part of the firm’s front line response to raising liquidity, and thereafter, experienced and helped shape the internal and industry change that comes after an event such as this. At the same time, she experienced the perspectives of her EMBA classmates, many of whom developed stark views of the Finance industry as a whole. She says, “Living through this permanently altered how I approach challenges at work, and provided me with a deeper understanding of what it means to manage risks. Further, I am grateful for the diversity of perspective my classmates provided me. While it was challenging to hear many of their views and personal experiences, in the end, it showed me the immense value garnered from consistently incorporating outside viewpoints into a decision-making process.”

When Erica moved to Bank of America, she made a commitment to herself that she would focus on building support networks at the Bank.

“I am quite proud of the ongoing mentorship and sponsorship relationships I have been able to cultivate since I joined more than 5 years ago. I truly benefit from these consistent interactions, regardless of corporate title. It’s so important for us all to feel supported and connected in the workplace and to have a safe space to go vent, seek advice, or laugh. We can all benefit from hearing about each other’s successes and challenges and realizing other points of view. Through these interactions, we become grounded as humans and are reminded that we have more similarities than differences.”

When asked what is the one thing you know now that you wish you had known when you were first starting your career? She offers,

“I wish had known how to consistently return to a sense of serenity within the chaos, and that sometimes silence and observation are more powerful than words.”

She goes on to say how her start in finance was somewhat briefly detoured: she had secured a dream job working for Deloitte Consulting doing systems and business consulting right out of college but received a call that the company was pushing back the start date of her analyst class to January of 2002 due to the economic downturn that occurred as a result of the tech start-up meltdown of that era. She decided to take advantage of that time and worked at a job that still resonates with her. She relays,

“I ran the front desk of my dad’s dental office for a month. I never would have had that opportunity had Deloitte not given me some extra time and money. Almost 20 years later, and I can still remember details of the experience which I am sure have altered how I interact with people working in customer service.”

The decision to take a different path is very poignant as, later that year, the tragedy of 9/11/2001 struck and, she shares that if she had started at Deloitte on the original date, she would have been at the World Financial Center when the planes hit. Instead, she was sitting in her apartment in midtown, having moved in the weekend before. She comments,

“I believe that was the first time I truly understood how much of our careers and our lives are beyond our control and that we should look for the lessons in each experience, even if it takes decades to find them.”

When asked what advice would you give to young women entering this industry? Erica candidly answered that she advises young women to create support networks as soon as possible within the bank.

“Join Bank sponsored networks and seek out mentors immediately. Keep the consistency of these relationships no matter how busy you are with your day job. Take on a little bit more work in one of these organizations or do a favor for a mentor. You will not only feel more connected and supported as you go through the ups and downs of your career, but you will also likely gain sponsors who are critical to your success.”

She added that advice for her peers is exactly what she reminds herself to do as well.

“Seek out camaraderie, friendship, and support at work and give it back as much as you can. Remember to find laughter. Don’t be afraid to hold people to your high standards.” She continues,

“Don’t be afraid to continue to try new things and learn. Ask questions when appropriate. Try not to be so hard on yourself to have it all, all of the time. Remember to drink water and exercise. Take deep breaths. And remember to be compassionate to yourself the way you would be to a friend.”

Upon reflection around the career navigation journey, she believes that having a true sponsor is the key to getting promoted quicker, or even helping get back on track when one’s career takes a detour. She states,

“Once I truly understood what it meant to have sponsors and how to maintain sponsorship, I was able to more easily navigate difficult situations at work leveraging these relationships, and I was surprised at how beneficial they became when I was looking to make transitions. It’s critical to have senior people who will proactively support you when it comes down to a management decision about your career.”

For the past five years, Erica states she has been fortunate to co-lead a group of 10 women as part of a grassroots effort at the company that aims to connect women across the organization and provide ongoing support throughout their careers. She mentions that the success of these groups is dependent on the commitment of the leaders and the members to show up on a monthly basis. The interactions are in person and entirely confidential. Each group takes on its own format and agenda as needed, but there is a central repository for groups to share a myriad of discussion topics. She enjoys the group and finds that within a few months, the groups form their own identities which garners natural commitment from its leaders and members.

She adds, “My prior group maintained the same core group of women for 4 years and we provided each other with consistent and honest personal and professional support, and we became committed to each other’s successes.”