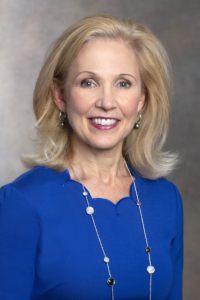 Being a leader in the wealth management industry can be lonely for women at times, but don’t give up, says Madelyn Caple, Head of Wholesale Partnerships and Business Development for Wells Fargo Wealth & Investment Management.

“It’s important for senior female leaders to continue to mentor and coach,” she says. “It can be lonely and competitive in this industry, and women tap out because they think they can’t do it all. But I am so glad I stuck with it. Sometimes it was hard to be there to chaperone a school field trip, but in the end, I know I made the right decision.”

She says that she is most proud of is where she is today, having raised two children and achieved balance. “Sometimes it was hard to be there to chaperone a school field trip, for example, but in the end, I know I made the right decision. It was as important to me to be a mom and wife as to be successful in my field.”

For the past three decades, Caple has served in client-facing positions with Wells Fargo and its legacy companies. Since being named to the role of Head of Wholesale Partnerships and Business Development in August, Caple has been focused on talking to different stakeholders in Wells Fargo and understanding what’s important to them and their clients. “You have to always keep the client at the center of what you’re building, because they expect us to be collaborative and show up together,” she says.

Prior to this appointment, Caple had served as Regional Managing Director for the Carolina West Region of Wells Fargo Private Bank, based in Charlotte, where she moved after several positions in Florida with the bank. While she moved frequently early in her career, it helped propel her to opportunities that she otherwise wouldn’t have had. “Being curious and willing to take a challenge can separate you from others,” Caple says. Although once she arrived in Charlotte in 2004, she realized that the opportunities were plentiful, and there she stayed.

She started in the corporate bank, but recognized that the newer wealth segment was a good fit for her skills and interests. “I realized I liked dealing with personal situations and helping my clients find solutions,” she says. To augment her B.S. degree in Finance and Real Estate from Florida State University, Caple earned the CERTIFIED FINANCIAL PLANNER™ professional designation.

One of the lessons Caple has learned is the power of networking. Given her tenure with the company, she had the advantage of having a strong network of contacts. As she says, you never want to burn a bridge, since what goes around comes around. “Ten years later you might find yourself sitting together on the same side of an opportunity or even on different sides. You have to always do what’s right and show respect for people.”

That collaboration shouldn’t stop as you climb the ladder, either, she says, adding that it’s important to continue to support one another outwardly. If someone puts an idea on the table, offer constructive feedback and try to move it forward with colleagues.

An active volunteer, Caple finds her philanthropic work to be incredibly fulfilling. She participates in many organizations, and her passion is in public education and its role as an equalizer. With both of her parents from rural Mississippi, she saw firsthand how an education allows you to distinguish yourself. She sits on the board of Central Piedmont Community College and recently was recognized by the United Negro College Fund as a 2019 Maya Angelou “Women Who Lead” honoree, someone whose footprints positively influence the community.

The reason for her passion is simple: “To whom much is given, much is expected. Giving fills my cup,” Caple says. “There are a lot of positive things happening in Charlotte,” she says. The bank encourages team members to volunteer their time to causes that are important to them and recently changed its matching gifts program to match volunteer time with dollars, in accordance with how today’s younger generation often prefers to donate.

Success is a Family Affair

Along with a keen sense of dedication, Caple says it’s vital to have a partner who supports your career and family ambitions. “You can’t have a full-time job in corporate America and a full-time job at home,” she notes. With one child in college and one recent college graduate, she and her husband have always loved to travel as a family. During spring break they typically took educational trips to Washington, D.C. or the Grand Canyon and still aim to find one thing a year that the four of them can do together.

In her free time, Caple loves to cook and entertain casually. Nothing is more precious to her than being in the kitchen and having her kids and their friends come in and talk about their lives and what they’re thinking about. “Now that my kids are young adults, I’m still seeking ways to continue to be impactful to them,” she says. “I feel fortunate to be at this point in my life where we’re all in a good place.”