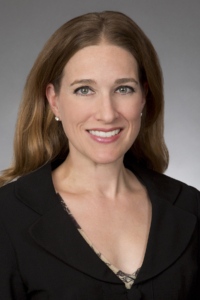 “I would have saved myself a lot of angst if I had known earlier in my career that everyone has their own style, and I don’t have to mimic others to be successful,” says Katten Corporate Partner Mara Glaser McCahan.

For a number of years, she tried to imitate the style of successful people who surrounded her, but she realized that it wasn’t working because she wasn’t being genuine. “Once I was able to hone in on my own style and trust that my style, although different, was every bit as good as others’, I was not only more comfortable, but more successful.”

A Career Path Forged From the Start

As Glaser McCahan puts it, she was that person who always knew what she wanted to be—a corporate lawyer—even proclaiming that to her high school newspaper as her post-senior year plans. And her career as a transactional lawyer has not disappointed. She terms her path as “fairly straightforward,” having dabbled in litigation and regulatory work as a summer associate but finding her right fit during her initial corporate assignment.

Of course, since she has been practicing for more than 20 years, the path itself has taken lots of turns. For example, the types of deals that she has handled have varied greatly, depending on the fluctuations in the economy. She first began practicing in the “go-go” days of the late 1990s, when money flowed fast and furious into startups, and companies went public on projected future earnings.

Then came the tech bust, and while those transactions stopped, different deals emerged—such as distressed deals, bankruptcy deals, bridge financings and other types of transactions where someone saw an opportunity in the fallout. While the twists can be challenging, Glaser McCahan believes that is what has made her career interesting. “While many of the basic principles are applied over and over, no deal is ever the same, which makes my job enjoyable and intellectually engaging,” she says.

Being a transactional lawyer requires the ability to adapt—to different types of deals, changing market conditions, different structures and more. “You learn from every change by absorbing it and applying it to future situations, which ultimately makes you a stronger lawyer with increased wisdom and better insight to advise your client,” Glaser McCahan says. And, she adds, this experience is what makes you valuable to clients. After all, a lawyer closes many deals in any given year, while the client may only do a deal every few years so they look to their legal team for guidance.

Given that depth of experience, having to choose a professional accomplishment she’s most proud of feels to Glaser McCahan like being a parent choosing a favorite child. “Every deal requires a lot of effort, and I throw myself fully into each one, with its accompanying unique set of circumstances that require creative solutions to get them across the finish line.” In addition, she notes, transactions require coordination and teamwork to keep moving toward a common purpose, both with the client and with the internal team. “Whenever a deal I’m working on closes, it is a feeling of accomplishment that through teamwork you were able to successfully help your client achieve a goal.” But basking in the high is short-lived, as Glaser McCahan then looks forward to doing it all over again with a new deal.

Helping Bring Others Along Is a Two-Way Street

Glaser McCahan recommends that young women take ownership of their own career; rather than sitting around passively and waiting for someone to take interest in shaping their trajectory, she urges them to ask questions, show interest, request help when needed and ask to be staffed on various assignments if they desire to work with a particular senior associate, partner or client.

“The answer may not always be ‘yes,’ but if you don’t ask, you won’t get what you want,” she points out. And, even if the initial answer is “no,” it’s a way to put yourself on their radar to hopefully have your request met later. For that reason, she says it’s okay to be aggressive, while never obnoxious, of course. “I think that folks are always interested in helping others who have demonstrated that they care and are willing to put in extra effort.”

And then the onus is on professionals at upper levels to make the effort to assist those who are just starting out in their careers. She recommends thinking back to your early career, as everyone can describe instances where someone helped—by taking an interest in their career through mentoring, providing useful advice or staffing them on an important transaction or case with an important client.

The need is particularly great for women. Despite the immense strides that have been made in many traditional practices, there is still a long way to go. Glaser McCahan remembers being the only female attorney in the corporate group when she was hired 20 years ago; even though more women are choosing to practice law in areas that have been traditionally male, such as corporate, real estate and finance, the numbers remain small. And they get even smaller when you consider the number of women who choose to continue to stay on the partner track and who actually make partner. “Despite the fact that women graduates outpace men, the business professionals sitting around deal tables generally tend to be all men. Even 20 years later, I am almost always the only woman; we have to do better to get women more seats at that table.”

And that can happen by being that person who helps create a career-changing opportunity, Glaser McCahan says, acknowledging that it’s easy to get wrapped up in your own career and busy schedule, and thus forget to pause and give a helping hand. “But even the smallest act can have a profound impact and we should strive to give back.”