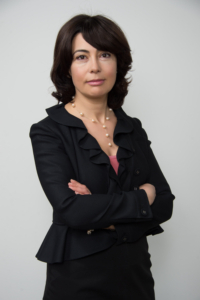 Don’t underestimate the importance of the company culture when making a decision about your career choices.

“Make sure the company’s values and philosophy are aligned with yours.” says Segal. “You need to be assertive and understand your options, and then put yourself in a position where you can leverage your skills to the highest possible degree,” she says.

A Career Rooted in Seizing Opportunity

Segal has a wide-ranging experience with both buy-side and sell-side firms. She started her career as an intern at BlackRock while earning her degree in economics at Columbia University and then joined full time as an analyst, a position she held for three years before moving to Goldman Sachs.

After having two children, she began looking for a healthier work-life balance and moved to Banque Nationale De Paris and from there to Nomura Securities. Ultimately she sought experience with alternative investments and went to Citi to assume a risk oversight role for the liquid portion of Citi Alternative Investments.

Segal left for a prestigious hedge fund launch, which ended up not getting off the ground as seed commitments evaporated in the midst of the 2008 crisis, and she found herself looking for work during the downturn. Segal joined Cerberus Capital Management as their first-ever head of risk management and built out both a risk team and risk capabilities to support both private equity and hedge funds. In 2011 she joined SkyBridge Capital as the head of risk management. In August 2019, she joined Morgan Stanley Investment Management as Head of Risk Management. Tatiana is enjoying the global and dynamic nature of the role and is looking forward to living up to Morgan Stanley’s four core values: Doing the Right Thing, Putting Clients First, Leading with Exceptional Ideas and Giving Back.

In addition to her impressive career Segal prioritizes her family—as mentioned earlier, she made choices based on the desire to have more time with her kids. “In the late ‘90s, the expectations of face time were immense, which could conflict with your desire to be with your children. It is astonishing to me that at many firms face time is still used as a measure of productivity. I believe that successful firms will be the ones that nurture more flexibility.”

Segal feels that the younger generation has been more likely to understand early in life that balance is important. “Rather than just living to work, they tend to prioritize spending time with friends and family,” she says.

In fact, Segal encourages women who are coming up the ranks to realize they need to stand their ground; it’s important to be assertive or you can end up unfulfilled. “Know your worth and your value, and be objective about what you can offer the company—that’s how you will earn respect and eventually flexibility. You need to put yourself in a position where your supervisors understand you can be equally effective without spending long hours at the office.”

Segal is part of 100 Women in Finance group where she co-chairs the risk peer advisory group. She believes it’s important to network with her peers, compare stories, and share views.

Segal carries on this mentoring spirit in her personal life, as well. In fact, one of her most impactful roles is as a board member for the Tenement Museum, which shares the hard stories about immigration history for the various groups who made America the “melting pot” it is today.

“There were women who couldn’t have their fingerprints taken because they had literally worked their fingers to the bone,” she says. “The museum did a remarkable job restoring the tenement building, and looking at where we came from—to really see the strides we have made—is both humbling and life-affirming,” she says.