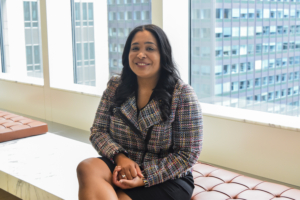 Kelly Hutchinson cannot stress enough to young professionals the importance of networking with their peer group.

“I tell young people that there is a counterpart to your role across the table, and you should get to know them because they will rise in their careers as you do in yours,” she said. As Hutchinson, a member of Katten’s Government and Public Finance practice group, points out, “You might not have a connection to the director but you might have one with the analyst, and eventually he or she will become the Managing Director, or Issuer, and you will have a great relationship that you forged many years ago.”

She also believes that employees at a junior level should realize the value they can bring every day. For example, a supervisor might not have time to read a wide variety of articles related to their industry, but more junior staff members often do have time, so they should so that they can educate themselves and contribute valuable insight to the discussion.

Finding Opportunities in Down Times

Hutchinson attended Pomona College in Southern California where she graduated with a bachelor’s degree in media studies. While in college, she attended the Tuck School of Business at Dartmouth College’s Business Bridge Program, a four-week immersive summer program with experiential project-based learning and personalized coaching and career development. The experience set Hutchinson on a career path that led her to become an investment banking analyst in the oil and gas industry.

A few years later, Hutchinson enrolled in Tulane University Law School in New Orleans. But the year before she was set to graduate, the disastrous Hurricane Katrina hit in 2005, forcing her to flee the city and the university to close for months. Hutchinson returned to Chicago where she finished classes as a visiting student at Northwestern University Pritzker School of Law.

While in law school, Hutchinson started working for a financial advisory firm and coincidentally found herself at Katten, working with attorneys there, on her first day. After graduation, she stayed on with them for more than 10 years, advising large municipalities on bond financing and eventually serving as director and chief compliance officer.

During the financial crisis, Hutchinson found that opportunities were available to really dig in and become known as a problem solver. She was offered the chance to work for the State of Illinois as director of capital markets to manage debt issuances and the debt portfolio. That was in 2015, during a time when the when the state was in the midst of an unprecedented budget impasse. Hutchinson found herself in the right spot to navigate complicated problems that were similar to others she had handled in previous positions.

“I believe the best time for public service is when your expertise will be valuable,” she says. “Every day I could go in and add value.”

Her first year in that role, Hutchinson conducted seven public market transactions totaling nearly $3 billion right before she gave birth to her first child. All in, she spent 3-1/2 years with the State, managing $30 billion of debt and raising over $10 billion of debt in the capital market. In May, she joined Katten, where she is familiar with many of its attorneys in the municipal bonds market and can leverage her transaction experience, making for an easy transition to this, her next chapter. “I decided it was time to try another spot at the table, providing counsel from a different perspective,” she explains.

All those experiences have shown Hutchinson that the only thing you can control is what you do—you can’t take ownership of how people see you and want to interact with you, but you can take charge of how you present yourself and live according to your values.

Part of that is merely showing up and taking advantage of opportunities, she says. “As a minority, you’re taught to put your head down and work hard, but you also need to take that extra step of making an effort to be present at meetings and social events and getting out to know your clients,” she says.

She predicts a long career, given that her late great uncle was an attorney who didn’t stop going to court until he was 95 years old. For now, Hutchinson enjoys her time with her 3-year-old son, especially appreciating the times that they travel together. “I want him to be a citizen of the world so we take one international trip a year,” she says.