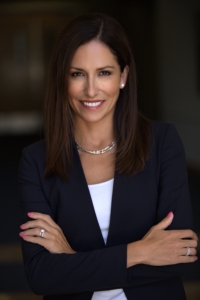 In fact, she added that one of the best options is to look at a job description for your ideal job to identify the traits that are needed and then then begin to both develop and showcase them to others to position you for that next opportunity.

“You have to articulate your career goals explicitly and surround yourself with people who can help guide you on that path. I have been fortunate to benefit from extraordinary managers and mentors that continue to challenge me and advocate for me when I meet those challenges,” she says.

Goryl says that she was recently inspired by a speaker who offered an interesting viewpoint: When presented with something that might be outside your comfort zone, don’t dwell on the potential negative, but instead ask yourself, “What is the best that can happen?” if you were to take the risk.

Developing Talent from Outside and Within

Goryl began her career as an analyst with Goldman Sachs, but soon relocated to the West Coast where she joined Merrill Lynch as a financial advisor (FA) before joining Wells Fargo Advisors (WFA). She became a regional manager for the company’s Western region in 2016, which she says is the role she’s most proud of so far because she is able to share best practice and help shape the culture of in her region. Not only that, but when she accepted the position, she had a toddler and a newborn—proving not only her ability to balance work and life but also that WFA was a place that valued its team.

As a regional manager, she particularly enjoys helping managers to recruit experienced advisors to the company. “WFA provides an unprecedented choice and flexibility for FAs and their clients through distinct business channels supported by established products, services and technology,” she says. “The breadth of resources—such as lending, philanthropic services and real estate asset management, for example— offered at WFA really resonates with advisors that want the ability to provide all wealth management solutions to their clients locally.”

Goryl is also an active member of the women’s recruiting committee, which focuses on hiring more female advisors, as well as attracting female clients as there continues to be an incredible wealth transfer to the hands of women.

The need for new talent is also crucial as approximately one-third, or 32,000, are likely to be retiring in the next 10 years, across the industry. WFA’s Next Generation Talent program is helping to address that.

Since its start, the program has brought new career opportunities to more than 1,800 team members, enhancing the WFA team with increased diversity in age, sexual orientation, gender and ethnicity. “I love coaching them and seeing them use their training to help clients create successful financial plans,” Goryl says.

While WFA is a woman-forward firm, Goryl finds that it’s still often necessary to overcome the feelings of intimidation that women can face in a male-dominated industry, particularly as their career level rises and the female representation dwindles. For example, according to global research and consulting firm Cerulli Associates, of the 310,504 total advisors across the industry—48,631 or about 16 percent—are women. “If we socialize the benefits of our industry, we can bolster its reputation as an ideal career for women,” Goryl says.

And she believes that women in upper levels have a responsibility to sponsor future female leaders. “We have the opportunity to create a brand that underscores that our company, and industry as a whole for that matter, are female-friendly,” she added.

Goryl suggests that a great way to do that is by getting to know the women who are climbing the ladder in your organization and advocating for them, adding, “Challenge the way things were always done with a fresh alternative. Women can be excellent at effecting change.”

One program she has found particularly meaningful over the years is WFA’s Women’s Best Practice Forum, which provides the opportunity for female finance professionals to convene and build a supportive network and discuss practice management ideas. Since the forum’s launch eight years ago, the company has hosted 75 events around the country.

Goryl finds that the ability to juggle roles as a manager, spouse and mother is only possible if you create a village of people to support you—such as family, friends or babysitters. And she says coworkers can play a role, too. “Don’t be afraid to ask for help and don’t minimize the importance of self-care, particularly in this fast-paced, always-connected digital world,” she advises.

She and her husband took that advice before having children and embarked on a six-month trip around the world, covering 43,000 miles and visiting 16 countries.

While spending time with her family and on her hobbies helps replenish her enthusiasm and commitment, Goryl also appreciates the opportunity to give back through WFA’s volunteer program. Currently, she helps to recruit veterans to WFA and serves as a liaison between the company and Camp Pendleton, a nearby military base.

When Krista isn’t working, she enjoys traveling, spending time at the beach just a mile away from her home and one favorite hobby: as a dancer for a popular San Diego band.

“I’ve always been passionate about dancing and was very active in high school and college,” Krista says. “Four years ago, I was at an event and was watching the band when I noticed one of the dancers was a woman I’d worked with at a brokerage firm years ago. She helped me land an audition and now I perform with the band multiple times a month. I’m so proud to be a part of the Atomic Groove experience.”

“I had a corporate coach who endorsed the idea of maintaining a hobby 100 percent. I learned to prioritize and to say “No” to things that were unfulfilling and to say “yes” to things that helped me grow as a person like this,” Krista says. What matters is that it’s rewarding and fulfilling—like my career.”