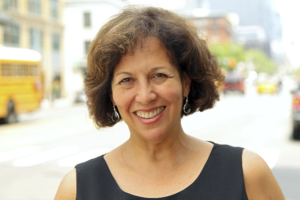 “I have plenty of runway left myself, but it is always still exciting to see how we can pass the baton,” says Ana Duarte McCarthy of her position helping inspire the next class of future leaders.

Throughout her career, Duarte McCarthy has focused on diversity and inclusion, most recently serving as a managing director and chief diversity officer for Citi. When she left in 2016, it was a good time to take stock of where her next opportunity could come from. First, she notes, she practiced the self-care we all deserve and took a couple months to travel, remained active on the board of the NJ Somerset County YMCA, and even purged closets and tackled all those small tasks that help us retain control over our personal life.

Then September rolled around, and that “back to school” feeling inspired her to figure out what was next. “I realized I felt untethered without a daily set of goals and objectives, and I missed having the opportunity to make a difference.”

A friend approached her about an opportunity to join Forté, which had been a long-time Citi partner and had a mission that appealed to her with its laser focus on increasing women in business leadership. Her other diversity work had covered a variety of communities, such as veterans, LGBQT+ and other cultural groups—all important. However, women had always been an aspect of these groups, and this gave her a chance to focus more deeply on women’s issues. That was a mission that was especially important to her, since as the mother of a daughter, she had a deep interest in assuring that her daughter had opportunities that had previously been obstacles.

Duarte McCarthy began in a fundraising role and has now moved into the position of director of development for corporate partners, where she works to identify companies that have a commitment to advancing women and express the values of diversity and inclusion. Often these forward-thinking companies are recruiting undergrads or MBA students and want to amplify their brand as a top recruiter for diversity. Having been a diversity lead for so many years, Duarte McCarthy has a special skill in talking with them about their pain points and how Forté can support them in their missions.

A Focus on Latinas

Assisting all women is important, but as a Latina herself of Dominican descent, Duarte McCarthy has a special heart for helping other Latinas. “I meet many women after conferences who might not have people in their immediate circles who can be a mentor so I try to reach out,” she says. And she believes it’s critical to break misperceptions about Hispanic women. “There’s a lot of bundling of Hispanic women together, but we cut across race and ethnicity, and there are also multiple diverse issues around socioeconomic scale and whether someone is a first- or fourth-generation student. It’s an interesting mosaic, and I believe I can support and advance the next generation of Latina women.”

One of the Forté programs she is particularly proud of is the Forté Forum, which enables women to explore the value of an MBA. They can hear from women currently enrolled in business schools and women who have completed their degrees, as well as get tips on completing the admissions process. Duarte McCarthy was particularly delighted when her 23-year-old daughter, a business analyst, came to one of the presentations to consider her future. “She’s always been supportive of me as a working mom, and it’s exciting to see her next chapter.”

More Work to Be Done

As Duarte McCarthy surveys the landscape, she points to an aspect of complacency and fatigue, as many like her have been pursuing the mantle of diversity and inclusion for so long, starting back when it was generally under the portfolio of affirmative action and/or equal employment opportunities.

Significant advances have been made, of course. For example, Forté was launched in 2001, on the heels of research on the value of an MBA for women, which comprised 25%-28% of the enrolled class, a number that has bumped up to 38% today. She is excited by this increase in women pursuing MBAs, as well as the varied career paths they choose to pursue, such as positions in supply chain management and investment banking as they truly take advantage of the breadth of careers available.

While that is heartening, she notes that there is more to be done; notably, that the pay gap persists. “This cultural aspect to pay people equitably needs a lot of attention,” Duarte McCarthy says. In addition, she says that while the drumbeat around MeToo has given people a voice, it’s unfortunate that is such a prevailing narrative in the workplace. “We have made so many strides, but our work is more important than ever.

“We have to keep up the energy because there’s still a lot of work to do,” she says. “We all have an opportunity to make a difference around D&I; it’s not for someone else—none of us can just be a bystander. We can all make a difference with how we lead and support our colleagues and those coming up the ranks.”