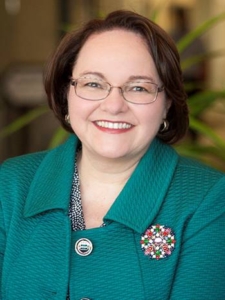 “Mentors are great sounding boards and coaches on developmental areas; however when it comes to organizational advancement, the majority of research points to the need for women to have a sponsor. In particular, having a male sponsor accelerates the advancement of women, especially because they still hold the majority of executive level positions in corporations,” she says.

There are other factors that women need to take into consideration in managing their careers. “It is important to also think about any special assignments or projects you take on and ask, ‘where is this project leading me?’ Look for projects that are stretch assignments and that give you exposure to rising leaders or leaders who are well respected for their management capabilities.”

Pivoting to Find Her Passion

Perez started her journey as a public relations and communications professional. One of her early positions was working for UPS; at the time they were undergoing a work stoppage in Mexico and the vice president of HR decided to send her “because I spoke Spanish and people trusted me,” she says. In preparation, he covered some HR basics so she could report back properly, which was her introduction to the field.

Once she arrived she realized there had been a breakdown in policies, with the company banning religious artifacts in the environment, and the workers upset as it was an important religious holiday. She was able to satisfactorily broker a solution that allowed for religious accommodations, her boss started including her in more HR-related work and within a year she went back to school to pursue a master’s degree in international business and HR.

She was recruited by Shell Oil in Texas, where she initially supported its existing diversity function, and then ended up becoming manager of D&I for two of their businesses. She became known for her prowess in negotiating and improving difficult D&I issues, and subsequently worked with many large companies, such as Ingersoll Rand, KPMG and Sodexho. She has also done consultancy work with corporations that needed to reset their D&I strategies as a result of mergers and acquisitions or class action lawsuits and has coached companies starting new programs. She has also worked with many new Chief Diversity Officers entering the space for the first time who needed support on establishing a strategy or department.

Ultimately Perez left consulting to set up the diversity talent acquisition initiatives at TIAA, and today serves at McCormick & Company as global head of D&I. With facilities in 50 locations in 26 countries, they have a vision to double the organization, which she finds to be an exciting challenge at the forefront of finding the right diverse talent to support significant growth and creating a corporate culture that builds off existing core values but also can adapt to the changing trends of the marketplace.

In addition to a passion for D&I, Perez is focused on trying to advance STEM talent in the workplace. She first became involved while at Shell where they donated computers to communities around the world through an initiative that was ultimately recognized by the United Nations. She is also a founding member and thought leader for STEMConnector.org which has blossomed to become a stand-alone organization that connects corporations, nonprofits and colleges and universities with STEM talent.

“Getting more women into STEM and leadership is all about building pipelines for the future. We have so many jobs becoming available, but not enough of the right kind of talent to fulfill them,” she says.

And building pipelines is crucial. “One of the reasons women don’t advance more quickly is because they are not in operational roles where there is an opportunity to show a more direct impact on the business and generating revenue,” she says, adding that she might have pursued a degree in finance and accounting had she known the importance of being able to make a financial impact.

“Women are still socialized to put their heads down and work hard with the hope that someone will recognize your success. The reality is you have to become your own best advocate. As long as you feel comfortable with 70% of requirements of a job then go for it,” Perez says. “No one is ever 100% ready for their next job; we just have to get comfortable with asking for what we want and going for it.”

Perez has worked in five countries and is passionate about traveling so she has visited more 30 cities in the U.S. and around the globe. She loves photography and is passionate about mentoring the next generation of diversity leaders and women globally. In her time off, she is actively involved in serving on a number of boards for nonprofit organizations.