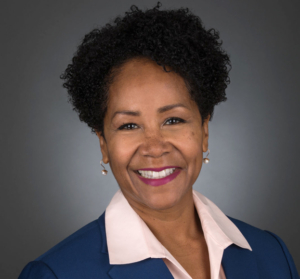 Dr. Terri L. Phillips is a big believer in not limiting yourself in your career.

“Don’t believe for a minute that any option isn’t open to you; understand your own career goals and identify the people who can provide guidance to get there. Be careful not to waver or let in fear that your goal is not possible, even if you don’t see someone like you in front of you who’s already doing it.”

Then as you move forward in establishing your career, earning promotions into the leadership ranks, she has learned it’s perfectly acceptable not to have every answer—and it’s actually even more important to surround yourself with good teams. “I believe that the team will always be better than an individual alone, so it’s important to have the courage to hire people who are smarter than you and build excellent teams.”

With almost 20 years of experience in the pharmaceutical industry and a practicing physician since 1986, Dr. Phillips has had a breadth of experiences. Her career has spanned a broad range that includes pediatrics, neonatal and perinatal medicine; and she has also worked across academia, healthcare and corporate America, as well as spending 14 years in the Army Medical Corps.

Currently vice president and global head of medical affairs at Merz, Dr. Phillips is proud to be building a best-in-class medical affairs organization to grow aesthetic and neurotoxin markets worldwide. “The industry is entering a new era where there is an expectation for transparency, and there is a demand for more information and new ways of packaging and receiving it,” she says. And with that comes a new set of expectations and pressures on the industry since they have to be sure they are meeting providers and consumers where they need to be.

That’s why she maintains her focus on educating healthcare providers on their products, taking into account that the vehicles for education have changed significantly, as some medical professionals turn away from more traditional avenues, such as attending large medical conferences or reading journals.

When developing a treatment, it’s important to represent both the consumer and healthcare practitioner voice at every step, she says; first, to gain a better understanding from the consumer who will ultimately select the treatment of which features and attributes are appealing to them, and then focusing on how to educate and train practitioners to make it safe. “I would tell my younger self to spend more time with the customer to understand their needs and make sure we are meeting them,” she says.

Encouraging Women at All Levels

Women these days have a complicated juggle, Dr. Phillips acknowledges. The mother of four children herself, she knows firsthand the struggle of establishing your career while simultaneously giving your family what they need. However, she advises young women to look for women who model this balance successfully, and the more role models, the more possible it seems for others.

Whether it’s through informal networks on social media or making connections on LinkedIn, she recommends that younger professionals reach out to successful women they come across at meetings or other events to gain career knowledge and advice. “Young women can and have reached out to me, and I am always happy to share my “lessons learned,” she says.

That’s a responsibility she feels based on her own experiences. When she first was promoted to the executive ranks, she was the fifth female vice president, and none of the women she saw in front of her had families. Of course, that introduced questions of whether it’s possible, so she appreciates that today’s career women are changing the narrative and showing both younger women and their male counterparts that it’s beneficial to establish a more inclusive workforce and leadership team.

On that note, she thinks it’s important for women who have achieved career success to support one another, rather than viewing others as competition. “We have to dispel the myth that there are finite opportunities, and instead encourage the next generation of young women to see that there are plenty of seats at the table.” There is plenty of work to be done, she says, in achieving pay parity and establishing more representation on boards and at leadership levels. “Those who have achieved a level of stature have an obligation to reach back and bring others forward,” Dr. Phillips says.

Clearly, family has always been very important to her, and when she was not at work, Dr. Phillips’ time was spent with her husband and family. Now empty nesters—aside from a 15-year-old dog—she and her husband remain huge sports fans. She played sports all through high school and even wanted to be a basketball player. But, she adds, their “nest” won’t be empty of children for long (visiting anyway!) as they eagerly anticipate a granddaughter on the way.