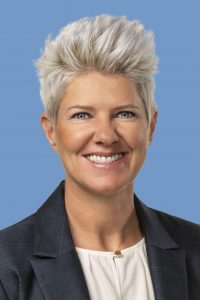 In our final profile covering Pride voices this June, Michelle Nyberg comments on the importance of diversity, her role as co-head of Australia & New Zealand affinity network Gays, Lesbians and Mates, and managing Australia and New Zealand’s Services footprint.

“Diversity is an asset and a valuable contribution to a large organization such as Goldman Sachs,” notes Michelle Nyberg, a vice president in the Services Division at Goldman Sachs’ Sydney office. “Junior women should not be swayed by misconceptions that the financial services industry is searching for ‘cookie-cutter’ candidates – it’s important to be yourself because everyone brings something new and different to the table.”

Over the course of her 16-year career at Goldman Sachs, Nyberg has sought to share her own unique views during a tenure that has spanned both the Operations and Services divisions. In 1997, Nyberg joined the Operations Division in Melbourne as an analyst. During that time period she worked for JBWere, an Australian and New Zealand stock brokerage firm that later formed a joint venture with Goldman Sachs and was fully acquired by the firm in 2011. Within six months, her manager was reassigned, and she took the initiative to express her interest in a leadership role.

“I didn’t have any experience managing a team, but I raised my hand to lead the team for a period of six months – to my surprise my request was approved,” says Nyberg. “What I learned through that experience is if you’re prepared to work hard and take risks, people will support you and provide you with new opportunities.”

Providing the Best Work Experience and Environment for Colleagues

Nyberg, who went on to lead the Operations team in Sydney before moving to the Services Division, then transitioned to overseeing a range of projects, including the JBWere integration and the renewal of the firm’s corporate leases in Sydney and Melbourne. “The opportunity to renew corporate leases for a firm like Goldman Sachs only occurs about every 10 years,” notes Nyberg. “I feel lucky to have been involved in such a complex project that affects our people’s day-to-day experience.”

Today, Nyberg’s role has expanded further and she is involved in evaluating and enhancing the region’s environmental, social and governance framework to support responsible operational practices and supply chain while increasing building efficiencies. This is in addition to real estate-related projects, such as providing Goldman Sachs people with modern workspaces. “My team is making tangible changes in people’s work environment, while fostering a culture of risk management to adjust business practices and driving commerciality, and it’s really exciting to lead these efforts,” says Nyberg. “Our division’s mission statement is to create the world’s best work experience and environment for the people of Goldman Sachs. I take that to heart and approach all my projects with that mindset.”

In addition to managing the firm’s Australia and New Zealand (ANZ) real estate footprint and corporate services, Nyberg has served for the past eight years as co-head of the Gays, Lesbians and Mates (GLaM) affinity network in ANZ, which brings together members and allies of the Lesbian, Gay, Bisexual, Transgender and Intersex (LGBTI) community.

As co-head, Nyberg has overseen the growth of the network to include 55 percent of Goldman Sachs’ ANZ people, helped provide leadership with tools to develop inclusive teams, offered training for LGBTI allies and reverse mentoring and organized numerous educational external speaker sessions featuring individuals in the LGBTI community, including Olympic swimmer Ian Thorpe. Nyberg notes that she is not afraid to push the boundaries to ensure challenging topics are discussed in order to educate Goldman Sachs people in ANZ, and says that one of her proudest professional achievements has been “seeing GLaM grow by fostering a sense of community for members and allies of the LGBTI community.” She also notes that Goldman Sachs’ receipt of the 2014 “Employer of the Year” award in the Australian Workplace Equality Index Awards was another exciting moment.

To that end, this year Nyberg was nominated for the Australian LGBTI Inclusion Awards “Network Leader of the Year” by senior leaders in Australia in recognition for her leadership of GLaM. “It was a big honor to be nominated for this award,” says Nyberg. “As someone who was not out at the office for more than a decade, I know how important it is to bring your whole self to work to perform your best.”

She notes that she was initially inspired to come out to her colleagues after attending a firmwide townhall that celebrated the launch of Goldman Sachs’ diversity program in ANZ. During the event a video was played featuring a female managing director in the Securities Division, who was openly gay at work. Nyberg ultimately connected with her over coffee, and as a result of their conversation says: “I felt comfortable enough to come out in the workplace however, there is still more work to be done. Today, I aim to serve as a role model and be accessible to folks across the firm as they navigate their own journey.”

Outside of the Office

Outside of the office, Nyberg enjoys wine tasting, and has installed a wine cellar in her basement. In addition, she loves to be active, making every effort to carve out time throughout the week to visit the gym. Nyberg, who recently married her partner of 15 years – after Australia allowed same sex marriage –is looking forward to honeymooning in Italy and Croatia this summer with her wife.