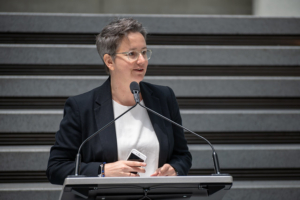 In 2011, The Glass Hammer featured me in one of their articles as a rising star, I had realized then that the personal choice I had made to be out in the workplace was a critical part of my confidence; and that being authentic and bringing all of myself to work was part of my value proposition to an organization.

Eight years later, as my career has progressed into more senior positions, that value proposition remains a truth for me and for my success. My choice to be out – and having a supportive environment in which to be out – gave me one less thing to worry about, so I could focus my attentions on what mattered – managing the trials and tribulations of running global programs and their teams.

I have always been an advocate for role models in organizations to help lead changes in approaches and attitudes. As a role model, I can be out for others, using my seniority to hopefully give people greater confidence to be themselves. I still believe that it is important to see yourself growing and developing within an organization and out visibility by senior leadership is critical to encouraging LBTI women as their career develops.

Working in an international organization, despite being in a bubble in Washington DC, I remain mindful of the reality of the challenges of being LGBTI in the 170 countries in which the World Bank Group is present around the world. Working as part of GLOBE (our LGBTI Employee Resource Group), we support our staff who may be working in countries where being LGBTI is criminalized or stigmatized. For example, we have worked with HR to ensure that LGBTI staff members who may be posted to challenging countries have i) a choice to discuss declining the position, without a negative impact on their career and ii) an understanding of how the World Bank Group will keep them and their family safe. We embrace the “Embassy model” of LGBTI inclusion meaning it doesn’t matter where in the world you are, we will implement and enforce protective policies and LGBTI-supportive measures, and we are working hard to make that a tangible reality for all our staff.

Out for global impact

It is an interesting time to be working in global development. The World Bank Group approaches exclusion based on Sexual Orientation and Gender Identity (SOGI) through its commitments on gender equality and social inclusion. The links between gender equality and development are well established in the World Development Report 2012. Social Inclusion is key to achieve the World Bank Groups twin goals of eradicating extreme poverty and boosting shared prosperity. Specifically, sexual and gender minorities are particularly important because they are likely overrepresented in the bottom 40%. While robust data is scarce, the existing evidence indicates that LGBTI groups have worse education outcomes due to bullying and stigma, higher unemployment rates, as well as lack of access to adequate health services, housing and financial services.

I now represent IFC on the World Bank Group SOGI taskforce. A multi-sectoral group set up to advance SOGI issues and to scale-up research, programs, and staff trainings. We are looking at ways that the IFC can support the private sector in this undertaking.

Joining the SOGI taskforce has been a great opportunity for me – outside of my day job – to understand at a deeper level the many issues and challenges that LGBTI people face in and outside of the workforce. My participation has helped me to develop new knowledge and skills.

I am only beginning to really understand how complicated human structures are – and how fragile organizations and economies are despite being the backbones of societies around the world. This fragility underlines my continued belief that role modelling is still critical to the implementation of changes that we want to see in the world for all. Ensuring that no person is left behind, as per the promise of the United Nations 2030 Sustainable Development goals.