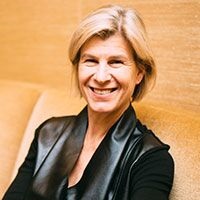 Stephanie Sandberg is a fan of bringing your whole self to the lunch table, or anywhere.

“There’s so much energy that is consumed by not saying the things you are thinking,” she says. So right up front when she was at a business lunch and someone would ask what her husband does, she would blurt out early that she was with a woman. “It helped ease the conversation and provided me a sense of wholeness,” she says, in urging young gay people to be open with their reality.

A Career in Media As the Foundation for Her Current Work

Sandberg spent the first 25 years of her career in magazine publishing, working on marketing for titles like the L.A. Times, Newsweek and the New Yorker before becoming president and publisher of the New Republic and, later, executive publisher of the Columbia Journalism Review. Then she pivoted to consultant work.

After dabbling in a variety of projects, she realized she wanted to focus on one area and became interested in women’s leadership and the barriers to advancement women faced at the top echelons. Sandberg joined Out Leadership on a project basis, which aligned with her interests in diversity and inclusion.

But, she found, “inclusion” was often male-dominated.

“Lesbians are underrepresented, underleveraged and don’t have a voice at the table,” she says. “The gay world is very similar to the straight world in how gendered it is.”

So she helped the organization launch OutWOMEN, running discussion dinners to get people around the table.

“We realized that women don’t come together as intentionally around professional matters,” Sandberg notes, so they launched both formal and informal events. The satisfaction she derived from this work pointed her consulting in that direction, and she ended up at a holiday party for LPAC in 2018, where she learned they were looking for an executive director.

Leveraging the Voices of Gay Women

Today Sandberg heads LPAC as a political voice for the LGBTQ+ community. One of her first moves was officially shortening the name from “Lesbian Political Action Committee” to its acronym, as she found the name wasn’t embraced by everyone.

Then she began leveraging what she learned at OUTWomen about how women come together. Just as she had previously discovered that women prefer to socialize differently, she learned in her early days with LPAC that LGBTQ women’s political concerns are different, but rarely discussed as such. “Gay women don’t always have the same priorities as gay men,” she points out, adding that healthcare, choice and women’s equality are paramount to gay women. “We needed to carve out a place and build a voice for this subset from the LGBTQ community and address inequalities by championing candidates who support us.”

Right now her mission is to make sure the community knows about LPAC, particularly people who have the financial capacity to support the group. The biggest challenge, she finds, is building the group out to where potential donors not only know about it, but also choose it as a priority among so many worthy causes.

“If they understand that their investment is an investment in strengthening this community, and then convert that enthusiasm and awareness by including us in their giving, I will have done my job,” she says.

Sandberg believes that will come as they build empirical data about how they have amplified the effect for the candidates they endorse. To that end, they launched a nonprofit group Project LPAC and have a fundraising event—Levity and Justice for All –scheduled for June 25, the only official World Pride event specifically for women.

Sandberg has the benefit of knowing the work she does will benefit her personal life, too, including for her wife of 20 years and two daughters, ages 16 and 12, but she also knows the importance of making them the focal point of her life aside from work.

“While my work is important, a broader wholeness comes from have a balance; a lot of career people find themselves too deep in the work, and while it matters, it can’t at the expense of family,” she says. “You have to treasure being able to have family experiences at the end of the day; my main goal is to spend that time with my girls.”