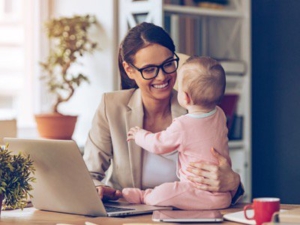 Globally, parental leave policies vary greatly among both advanced and developing countries, and researchers have determined that these policies can have a profound effect on female workforce participation rates.

Research conducted by Goldman Sachs found that in 2018, the participation of prime-age women in the US economy was lower in comparison to the workforce participation of this population in 2000, nearly 20 years earlier.

A separate study, titled “Female Labor Supply: Why Is the United States Falling Behind?” that was published in 2013 in the American Economic Review, found similar results, reporting that in 1990, the US had the sixth-highest female labor participation rate among 22 OECD countries. However, by 2010, the US’ ranking on this list fell to 17th.

Goldman Sachs research estimates that if the US were to introduce longer parental leave policies and higher public childcare spending, similar to policies adopted by other advanced economies, female-participation rates in the US could increase by around 4 percentage points.

Companies are therefore focused on their parental leave policies, including Goldman Sachs, which offers primary caregivers 16 weeks leave and non-primary caregivers four weeks leave following the birth or adoption of a child. In addition, the bank provides a variety of other services to employees to support them during this time period.

Naomi Leslie: “I Appreciated Being Treated Like Any Other New Mom”

Naomi Leslie, a managing director in the Investment Banking Division, described working closely with the firm’s Wellness team as she prepared for her baby, who was born via gestational carrier. “I appreciated the firm’s parental leave policy because I was treated like any other mother who was carrying a child,” said Leslie. “I took several months to be home with my daughter and bond with her, and felt well supported by the Wellness team in preparation for going on leave.”

Leslie noted that she relied on LifeCare’s consultants, as well as their recommendations for pediatricians and day care centers, in preparation for the arrival of her daughter. In advance of going on leave, she also discussed different approaches with Wellness for keeping in touch with her teams, and ultimately went on to develop coverage guidelines for each client.

She recommends that both women – and men – take the full parental leave offered to them, in order to “set the standard” going forward. “We should begin to treat paternity leave with the same reverence as maternity leave,” Leslie notes.

Jane Moffat: “The Support I Felt Was Unparalleled”

“The support I felt was unparalleled – both from the firm as a whole as well as Wellness, my team, and my internal clients,” said Jane Moffat, a vice president in the Legal Department. Based in the firm’s Washington, DC office, Moffat also described the lengths the firm went to in order to provide her with appropriate accommodations. “We have a wellness room in our office that was converted into a lactation room – as a breastfeeding mom, my needs were prioritized and it could not have been easier for me to return to work.”

As part of her role, Moffat makes overnight trips between Washington, DC and New York, and leveraged the firm’s milk shipping program, offered in partnership with LifeCare, to ship milk home overnight. Moffat said, “The process worked seamlessly each time – Goldman Sachs is truly the best place to work, including for a new mom.”

Vinod Jothiram: “Taking My Parental Leave Helped Me Bond With My Son”

As a soon-to-be new dad, Vinod Jothiram, a vice president in the Securities Division, thought that the firm only offered a few weeks for parental leave. However, as Jothiram planned to be the primary caregiver for his newborn son, he realized he was eligible for Goldman Sachs’ primary care parental leave program, which offers up to 16 weeks. “Taking my parental leave helped me bond with my son over the course of the 12 weeks I was home with him,” said Jothiram.

Jothiram described the process of taking his parental leave as “fairly straightforward,” noting that he had developed a transition plan to bring team members up to speed. He recommends: “If you’re taking a parental leave, think of it like mobility – you should develop a plan, and team members should be ready to pick up different roles upon your return.”

“Prior to taking maternity leave, I was a bit concerned about being away from the office for several weeks,” explained Naomi Lupemba, an associate in Compliance. “However, after going through the process, I realized that this concern was completely unfounded – my team was very supportive of my parental leave.”

Lupemba described how she took advantage of the myriad of benefits offered by Goldman Sachs in advance of, during and after returning from maternity leave, including onsite prenatal classes and onsite childcare. “At my lunch break, I go see my son,” said Lupemba, noting that she uses firm-provided childcare at her office. “Being able to see him in the middle of the day removes a source of stress for me as a new mom.”

Elizabeth Reed: “My Managers and My Team Were Extremely Supportive”

“The idea of going on maternity leave was daunting,” said Elizabeth Reed, a managing director in the Investment Banking Division. “However, my maternity leave outperformed my expectations – my managers and my team were extremely supportive.”

Reed described her leave and returning to work as a “holistic recovery process” due to the support provided by the Wellness team, including lactation services and childcare guidance. Commenting on her return to the office, Reed said, “All my colleagues at work who have children have been incredibly helpful – I now have a whole new network to connect with as a sounding board.”

The Role of Corporations

In the absence of a federal paid parental leave policy, it’s more important than ever for private institutions and corporations to provide new parents with the resources they need to successfully take their parental leave, and ultimately return to the workforce.

Goldman Sachs is one example of what a company can do to help employees manage one of the biggest changes in their life, such as introducing a child into their family, successfully.