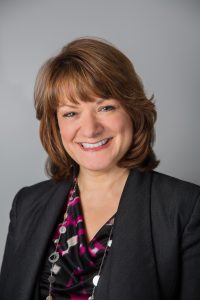 “I value my relationships and act with intention to make strong connections with people,” she says. “You have to be bold and brave, but also true to who you are: When you act authentically, you can build trust.”

That instinct to be bold was the catalyst for an important moment in her career, that didn’t necessarily seem so at the time. She was attending an internal leadership event, but arrived late due to travel delays. She ended up being seated at the same table as the new CEO; she figured that this was her opportunity to ask him if he would be the featured speaker at an upcoming customer meeting. The ask and event went well, cementing her reputation as someone who gets things done. “You can’t wait for things to happen; you have to ask for what you need,” Johnson advises.

A Career That Revolves Around Leading through Change

With 25 years of career success under her belt, Johnson has worn a wide variety of hats, which gives her a strong background to draw from. Over the years, she’s tackled organizational and business change and been involved with strategic planning, program management and communications – broad experience she can tap into it for whatever work adventure comes next.

Although she has lived in the corporate world for the bulk of her career, she actually started in an entrepreneurial environment, the kind of start-up company where employees knew their “number.” As the company grew, she grew with it, experiencing everything from internal marketing communication to customer-facing outreach and consulting.

The customers she visited around the country were Fortune 100-level companies who were launching work/family benefit programs, a sector that was groundbreaking at the time. The company was a pioneer in the work management and training world, and since her boss was a woman, Johnson never experienced the male-dominated hierarchy that seemed prevalent in other companies.

“The founder started the company based on an idea that became a mission and passion so that intent has always been core to my beliefs,” she says.

Even in the corporate environment, she still found herself working among strong women, and Johnson noticed that one of the women she worked for had become the president of the division without ever going to college. To her that signaled that there were no boundaries, and she found that to be true as the company grew and evolved, and she was always able to jump into new things.

After working in Minneapolis and Boston and traveling globally, she decided it was time to pivot to being “home,” which for Johnson is Portland, Maine, so she sought an opportunity at WEX—a company with a strong growth story—and has been there almost nine years in different roles in both corporate communications and program management, most notably assisting with the CEO transition. What she immediately recognized and appreciates about WEX is that there’s a spirit of entrepreneurism; it’s a place where what matters most is if you deliver, rather than your title and level. What really matters, she says, is what happens when you walk in the door.

“The best parts of my job are helping others manage through change and ambiguity, whether that’s bringing structure and clarity to multifaceted initiatives, facilitating an efficient meeting or helping our senior executives craft the right message,” Johnson says.

Her desire to play the helper role has always been prominent in her career and came to its largest light right after 9/11 when she was working with the company that provided counseling programs to those directly impacted by the tragedy. She helped develop educational materials to support employees and organizations, overseeing a constant evolution of needs in what she feels was one of the most meaningful times in her career.

Currently, she is proud of the forward-thinking planning WEX is doing as they look ahead to 2019 and maximizing the opportunities for a newly acquired company that will spur growth as they consider expanding into additional markets. “It’s exciting to be part of the process and help bring together new ideas and concepts that will help us become a richer, deeper place as we hone our focus and find alignment among a wide variety of critical initiatives for 2019.”

Finding and Sharing Strength With Colleagues and Family

Although Johnson says she has been fortunate to have been mentored by phenomenal women over the years, none stands brighter than her own mom, who supported two kids while leading a busy working life. Johnson views her mom as a pioneer in her day who paved the way as a strong role model in both career and family life.

And she knows the importance of relying on strong relationships as the cornerstone of a career, whether it’s the leaders she supports, her peers or her own team.

Johnson appreciates being part of Women at WEX, particularly when she is able to help people navigate the company and their career. “There’s this great spirit here, and we have a lot of Type A personalities, but finding a way to volunteer and give back has been really exciting,” she says.

In addition she has forged strong connections with many women outside of WEX who have been pioneers in their own career, such as one who became one of the first women partners at a financial services company. “I have learned lot about being honest, open and brave from this network of women,” she says.

Married to her high school sweetheart, they have two girls and a boy — two in high school and one in college. While it’s not easy to get together, she says they are fortunate to have a family camp two hours north on Green Lake. Aptly called “Second Wind,” it’s where they can recharge and reconnect even if they can only grab 48 hours as they did recently.

In addition, they love to travel; they have hiked throughout Utah, Maine and New England and are excited about an upcoming trip to Italy.