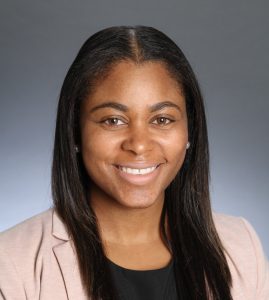 PwC’s Noel Abdur-Rahim knows it’s vital to bring up other professionals alongside you.

“You can’t look around at the other professionals at your level and then above you and say ‘Only one or a few of us can make it,’ thereby setting up a spirit of competition. We are stronger when we leverage all our best qualities and work together, realizing that we can all walk through the door rather than competing with our colleagues.”

That attitude has helped Rahim form important relationships that has led to her ongoing success at PwC.

Rahim began her career in the Assurance practice in PwC’s Detroit office in 2005, after interning there the year before. In 2012, as a manager, she made the personal decision to move to Atlanta, a transfer based on her impressive track record and the strong relationships she had built over the years.

Today, with the many changes being introduced regarding regulations in tax reform, she sees a lot of opportunity for the profession, particularly for those who are strong performers and leaders, who thrive during times of disruptive change.

While Rahim has achieved a high level of success throughout her tenure with PwC, she counts the fact that she was able to graduate college as well as obtain a master’s degree as a first-generation college student as her greatest achievement to date. “These accomplishments made me very proud on behalf of my family and those coming behind me,” she says.

Take Chances and Don’t Count Yourself Out

Along the way Rahim has realized that no one ever expressly tells you that a successful career requires strategy and being thoughtful about where you want to go, while remaining agile.

She wishes she had known earlier that you don’t have to be 100% qualified for the next role in order to raise your hand and express your interest. She notes that women have a tendency to worry they can’t do something because they are missing one of 20 qualities, but that small deficit can often easily be overcome.

“You shouldn’t count yourself out because you are afraid you won’t make it,” she says. “Believe in yourself and ask for those opportunities when you’re 90% of the way because you will learn the remaining 10% when you’re there.”

As a senior associate, she joined PwC’s Senior Select program designed for diverse professionals, where she says the sessions gave her insight into strategies for success. One session that particularly resonated explored how work is a game – not in a negative way, she points out, but if you’re not participating and strategizing about where you want to be, how to get there and talking to others about the right path, you may already have lost.

“We tend to think that if we put our head down and do our job, we’ll be rewarded, but sometimes you will and sometimes you won’t,” she says. “You have to play a part in owning your career and where you will go.” Once she started incorporating that philosophy into her work life, she began noticing subtle positive changes in her opportunities.

Rahim currently leads the Assurance diversity efforts in PwC’s Atlanta office – although it’s not a formal role, she was instrumental in spearheading several initiatives that have proven to be successful. First, she went to the leaders in the market to explain her passion for diversity and explained her ideas and suggestions to drive change in the market. Her efforts were welcomed by the partners, and they granted her the ability to lead and drive her ideas forward.

“They have been very flexible with this, which has created a unique culture here in Atlanta that has made an impact on retention and recruitment,” she says.

One particularly successful program piloted out of Atlanta was an initiative to expand diversity efforts in the Birmingham, Ala., office, which is part of the greater Atlanta region. As part of this diversity effort, Rahim proposed developing a mentoring program where diverse managers in Atlanta are paired with counterparts in Birmingham.

She felt it would be more successful if the initial meetings were in person, so the mentors and mentees could meet for a day to build their relationships. “Firm leaders were very supportive and on board, and I think this first in-person interaction made the difference in allowing the program to flourish,” she notes.

Rahim believes that it can be easy to have a misguided perception of what success looks like, especially as a woman or as a black professional, because the public accounting industry has a history of being white male-dominated. It’s important to add role models so that others can see themselves succeeding, even if they don’t look like the vast majority of the leaders.

On that note, she sees how crucial it is to have proactive support from leaders, mentors and sponsors who pull you up and offer encouragement, even if you don’t automatically see yourself in an expanded role.

With two children, ages 4 and 5, Rahim prioritizes spending as much time with them as she can, while still being able to provide for them. For that reason, she knows it’s important to leave every day between 4:30 and 5, even if many would see that as an impossibility. “I make it work so I can be home with them daily when they get home from school.”

Rahim recently returned from a four-week sabbatical that included a trip to Europe, her first visit overseas alone. “It was the chance to conquer a big fear of mine, as I traveled from Paris to Brussels to Amsterdam, sightseeing and enjoying the cuisine. Most importantly, I came back proud of myself for doing something that previously would have been out of my comfort zone.”