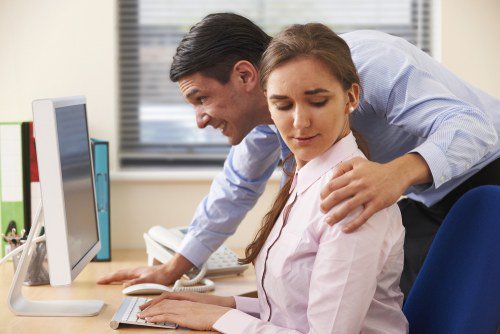 In our current political and cultural context women are emboldened – on an historically unprecedented level – to call out the toxic behavior of male colleagues.

What many men are now learning about second hand through the news is a reality women have lived with since entering the workforce over a century ago. Now that the floodgates have opened there is a reckoning taking place: As more and more women speak-up about their harassment experience, others feel supported in coming forth with their stories. This has led to a wave of solidarity, where women are also communicating more with each other on how to approach this problem. One example is the 13 million dollar legal fund for women in low-wage jobs, that was recently announced by a coalition of women in the entertainment industry.

Many of the women who are coming forward were offered financial settlements in exchange for their silence. This sends an unmistakable message that their employers were willing to tolerate harassment without real consequence. What would have been the response had these men committed an equally egregious ethical or procedural breach of another type, like misappropriation of funds, or ignoring a safety issue? Would it have been overlooked, swept under the rug, or treated as confidential? Instead of creating organizational cultures that have a true zero tolerance policy for sexual assault or harassment, we’re living in a world where, until now, it’s been acceptable to quietly collude in a cover up if the perpetrator has enough money, status and power to make the issue go away. This is privilege run amok. Proposed legislation in California that would benefit non-disclosure agreements in these settlements is one possible solution.

So how did we get here? One aspect is the cultural conditioning men receive from a very young age, which entails gaining prestige by cultivating a “cowboy” atmosphere that excludes and often diminishes women. This can range from simply favoring men for leadership roles or drowning out female voices in meetings, (labeled “loudership” in a Harvard Business Review article), to outright objectification, harassment or assault. It’s a systemic issue that is bigger than a few bad actors. Though it’s easy to point a finger at the egregious offenders who make headlines, what about the role that other men play in perpetuating the culture that allows this behavior to flourish? This is a time for men to ask ourselves individually how we have contributed to an environment that has allowed a large number of high profile men to engage in this behavior, over the course of careers that often span decades.

One of the more insidious dimensions of this is unconscious bias. Confronting this requires cultivating a mindfulness of the way one’s own culture and identity shapes behavior and perception. It calls for working with discomfort and sitting with those feelings. At White Men As Full Development Partners, we approach unconscious bias by suggesting the real work before us is to better understand our own privilege and the way other factors like gender and racial conditioning impact how we feel about and view each other. For example, white men don’t typically pay as much attention to their appearance at work, and they are rarely judged as being incompetent because of how they dress. Yet we know from research that the perception of a woman’s competence at work is much more connected to their appearance than their male counterparts. Women are under a lot more pressure to literally “look the part” in order to establish credibility at work. (4)

Another skill that’s crucial to develop is the courage to identify problematic behavior, and speak up to disrupt it. This gets back to the importance of fostering an awareness of how perceptions and realities differ depending on different aspects of your identity. Something that might seem innocuous to a man might actually be experienced as intimidating or inappropriate to a woman or member of a marginalized group. Recognizing that everyone has the right to feel safe and valued in the workplace (and beyond) sets the stage for this approach. The idea is not that men are fundamentally flawed, but rather, are in need of some perspective on how other groups experience life in a white male dominated culture.

Though it’s tempting to think this issue can be addressed with a two hour workshop or online learning module, the reality is that it’s an ongoing process and a long-term commitment. The research, however, says that behavior change isn’t fixed by “training” alone; it’s fixed by helping people learn to first courageously examine and then consciously shift their mindsets. Individual behavior change is a lengthy and deeply personal process. The assumption that training will eradicate a culture of collusion and protection isn’t realistic. Instead, our approach is to begin by examining how the power, privilege and status that each of us wields may impact the way we lead and partner with others. You can’t change behavior without shifting mindsets, and there is no ‘quick fix’ when it comes to that work.

We also need to ask ourselves what men can do to help prepare the next generation? What can be taught to children by men (and women) to preempt some of the sexual harassment endemic to our culture? This behavior starts at a young age because boys want to connect and want to gain status with each other, so we need to find ways for them to do that in positive ways, where there’s space to be vulnerable. Traditionally, discussions on sexual harassment have tended to frame this as a “women’s issue,” and changing that perception is crucial to this process. This entails examining the impact this behavior has on men as well as women, and on the success and health of systems we work within and depend on, from the private sector to government and beyond.

Disclaimer: The views and opinions of guest contributors are not necessarily those of theglasshammer.com