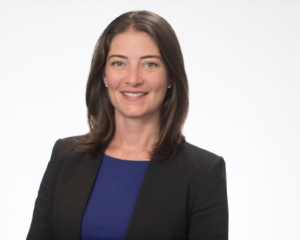 When considering the path of your career, one factor that WEX’s Katherine Ferguson always suggests younger women focus on is sponsorship. She says it’s vital not only to have someone who is supportive of your path, but is willing to take risks to advocate for you and pull you up. “Find that person and build a relationship, and it will serve you well throughout your career,” she says.

For her part, she says she has been fortunate to have had experience working with amazing leaders who have served as models as she attempts to emulate the qualities she admires, including a calm presence, authenticity and supportive leadership.

“I have learned how important relationships are, and how you have to take the time to nurture them, whether they are colleagues, peers, team members or those in senior roles,” she says. “Often when you enter your career, you are focused on getting the work done, but you have to remember to take the time to network and develop relationships that will be instrumental in your path for years to come.”

Searching For and Finding Her Passion

After completing degrees in art history and accounting, Ferguson began a career in accounting, including a stint at the Smithsonian that tied her two interests together. She soon decided that she wanted to move out of accounting and realized marketing appealed to her, with the balance of creativity, data and analytics.

Ferguson joined American Express out of graduate school and spent 14 years there serving different customer and geographic segments. She then decided she wanted to take her experience to a company that was smaller, but growing fast, where she would have an impactful role transforming the brand and customer experiences.

WEX was a perfect fit, particularly due to its culture. Having grown up with a father who was an executive, she had some sense of what the corporate world would be like, but over her career she has grown to appreciate the fact that each company has a different culture that impacts your career and working environment. That has helped inform her path along the way, as she assesses the culture of various roles and then strives to build a great culture among her team.

Right now, she is enjoying challenging her team as they elevate marketing into a best-in-class organization, including launching new products, new partnerships and new customer journeys.

One of her secrets to success is to hire people who are smarter than you, set them up for success, then get out of their way, she says.

A Focus on Mentoring Women

Currently, Ferguson is working with two senior executives on a recently launched women’s network. “I’ve been so impressed by WEX in general and the importance it places on supporting women, from our female CEO, cascading down to numerous senior female executives and beyond. This emphasis really speaks to our community and culture,” she says.

The network is designed to help build a community of women throughout the organization who will support each other and collaborate through common challenges. “It’s a concept that’s near and dear to my heart,” Ferguson says.

Aside from the many hats she wears at work, Ferguson makes time to find balance in her life — from spending time with her family to nurturing friendships and giving back to the community.

A recent newcomer to the Portland area, she has jumped right in, joining the boards of the Portland Museum of Art and United Way. She is also very proud of the time she spent mentoring a refugee student from Somalia at Portland High School last year. Although the woman spoke four languages, English was not one of them until she arrived in the United States, so Ferguson helped her with her school work and the college application process, celebrating the fact that she is now a student at the University of Southern Maine.