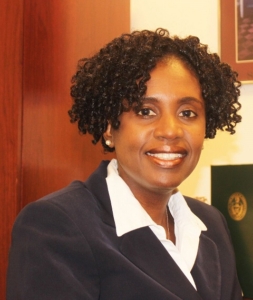 Dr. Marilyn Fraser has always had a passion for patient education and talking to people about health, considering it one of her favorite aspects of medicine. That’s why when she was facing a crossroads regarding career direction after completing medical school, she was delighted to hear of the opportunity at the Arthur Ashe Institute for Urban Health (AAIUH), located at SUNY Downstate Medical Center in Brooklyn. The more she went into the community to talk about health, the more she realized it was a career path where she would stay.

The Institute was founded by Arthur Ashe, an activist, tennis champion and humanitarian interested in addressing health inequities, including the underrepresentation of people of color in the health profession, and implementing innovative community outreach programs. The Institute has a stated long-term goal of reducing morbidity and mortality by improving health knowledge, facilitating behavior change and expanding access to care among the most vulnerable populations in urban areas.

A central component of the mission is to create partnerships and research the needs of communities, then develop best practices or make policy recommendations to address the issues, she adds. The Brooklyn Health Disparities Center, a key collaboration of the Institute with SUNY Downstate and the Office of the Brooklyn Borough President, is a great example of such a partnership.

Tackling Challenges to Advance the Mission

From growing up in the West Indies to her time living in Brooklyn, Fraser knows firsthand that there are communities that are underserved, with limited access to care. In addition, education is sorely needed as some people are not aware of resources that are available. “We try to link them to those resources because sometimes they can’t afford the care they need or lack access to care,” she points out.

In addition, groups like AAIUH play a key role in dispelling myths about health and disease. “We want people to be aware of what’s going on in their bodies and not be afraid,” she says, adding that they are realizing that even simple conversations can provide clues to social issues that might be coming into play and hampering the ability of the community to access healthcare.

“One of our biggest challenges is funding and how to conduct effective programs, including research as budgets are often cut with no warning,” she says.

Recently, the AAIUH, under Dr. Fraser’s leadership, was awarded a grant to lead a consortium to develop a strategic plan for community-based organizations (CBOs) to share their knowledge. The program, part of Delivery Systems Reform Incentive Payment (DSRIP) program received a $2.5 million dollar grant to work with community-based organizations to lead a consortium to build the capacity of CBOs to address the DSRIP deliverables focused on improving health outcomes .

They are currently a little more than halfway through the one-year grant, which they hope will promote sustainability and also create systems to address healthcare inequalities. “The award recognized the Institute’s leadership, and I personally found that being acknowledged by peers and selected to carry out this important mission is one of the greatest honors anyone could have,” Fraser says.

Relationships Are the Key

Fraser has helped keep her passion alive by building relationships within communities. But she adds, “It’s important to realize that we must stay mindful of the fact that the people who live these experiences are the experts, and you can’t come in with preconceived notions. In medical school they taught us to listen to our patients because it can be all too easy to rely on our own ideas and discount what is actually being said.”

She acknowledges that nothing is done overnight and that it takes time to foster relationships, especially while also handling administrative needs. “You have to find a balance between the many relationships and create and maintain a culture that speaks to people with varying needs, priorities and agendas,” she says. While she knew that politics would play a big role, she has come to realize just how important it is – and how much time is needed to devote to political issues, compared to her former deputy role.

As the years go by, Fraser says she finds that the general public isn’t as aware of Ashe and his mission, which is why they work to keep his legacy in the forefront. “If we are cognizant of making sure that we maintain the essence of who he was and why he created the Institute, I am confident we will do the work in the same vein that it was intended and sustain it, which is the important factor,” she says. She particularly appreciates how her role is made easier because of the support she is offered from her entire team, including the board.

Dr. Fraser carries her love of cultures over into a passion for travel, always wanting to experience new places and people. One of the Institute’s programs has been replicated in Trinidad & Tobago, in collaboration with the University of the West Indies. In addition, she notes that a big part of everything she does is spurred on by her faith, and she finds that her family, including her nieces and nephews, keep her grounded. Friends play a key role too. “In addition to prayer, cooking is my stress reliever and I love to invite groups over to join me,” she says.