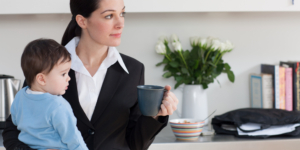 At work, or on your way? You may be helping your daughter’s professional future (and we’re not just talking college fund) or improving gender equality in your son’s future household.

As part of their new Gender Initiative, which seeks to “change the conversation around gender and work”, Harvard Business School released a study of over 30,000 adults across 24 countries which explored how having a working mother as a child affects educational, economic, and social outcomes as an adult. A working mother was defined as a mom that ever worked (part-time, full-time, etc) outside of the house before her child (the survey participant) was 14 years old.

According to lead researcher Dr. Kathleen McGinn, “This is as close to a silver bullet as you can find in terms of helping reduce gender inequalities, both in the workplace and at home.”

Exposure to role models is critical for women in the workplace, in order to be able to envision yourself in a role which otherwise might not seem accessible. The working mom effect also comes down to alternative role modeling, the opening of possibilities around roles and responsibilities.

The researchers were not concerned about the nature or intensity of a working mom’s work, whether it was full-time or part-time, but rather simply how it played out when children were exposed to “a role model who showed you that women work both inside and outside the home.”

According to McGinn, “What it’s about is modeling alternatives for your children, letting them see that there are multiple roles that women can play and multiple roles that men can play in their lives at work and lives at home.” As the study showed, experiencing alternative role models that “aren’t constrained by really tight gender stereotypes” had different impacts for daughters and sons.

“What daughters of working moms see is that it’s okay to go to work, it’s completely normal, that’s something that women do,” said McGinn. “Sons see something really different and that is everybody has to pitch in here. There’s no good way to maintain a management of a life outside of the home and a life at home unless everybody at home is working together.” Previous research has shown that sons of working moms are also more likely to be married to working women.

Underlining the point, she says, “There are very few things, that we know of, that have such a clear effect on gender inequality as being raised by a working mother.”

No One Path For Parenting

According to McGinn, “There’s very, very little research suggesting that being raised by a working mom is bad for kids. I think that’s something we harbor.” It appears we do, and it’s exactly these notions that the research hopes to dispel.

A previous Pew survey found that while 34% of working moms felt increasing numbers of working moms were good for society, an equal 34% felt it was bad, and a further 31% felt neutral about it.When you look at the total population, negativity towards working moms gets stronger (41%), showing the influence of a strong societal belief. But when asking all adults this question, respondents with a working mom were less negative than those without.

Mothers who work full-time are also likely to be hardest on themselves when rating their own parenting, only 28% rating themselves as a 9/10 (about same as dads at 26%) versus 41% of part-time workings moms and 43% of non-working moms.

As Gender Initiative director Robin Ely points out, “So much of what people think they know about gender is simply not substantiated by empirical evidence but instead is informed by gender stereotypes.” The objective of the initiative is to break the conversation from the stereotypes.

In the HBS study, working mothers actually spent equal time caring for their children.A meta-analysis has shown that children of working mothers have less depression and anxiety and recent research found that quantity of time with children between ages 3 and 11 matters less than the quality of your presence when you’re with your children.

McGinn is quick to point out that this doesn’t mean moms should work, just that there are benefits to alternative role modeling which go against societal preconceptions.

“There’s a lot of parental guilt about having both parents working outside the home,” McGinn says. “But what this research says to us is that not only are you helping your family economically—and helping yourself professionally and emotionally if you have a job you love—but you’re also helping your kids. So I think for both mothers and for fathers, working both inside and outside the home gives your kids a signal that contributions at home and at work are equally valuable, for both men and women. In short, it’s good for your kids.”

Ultimately, it’s up to every family and every woman to make their own decisions about what is right for them and not based on societal ideas of what’s right for all families, all women, or all children.

No such “right” exists.