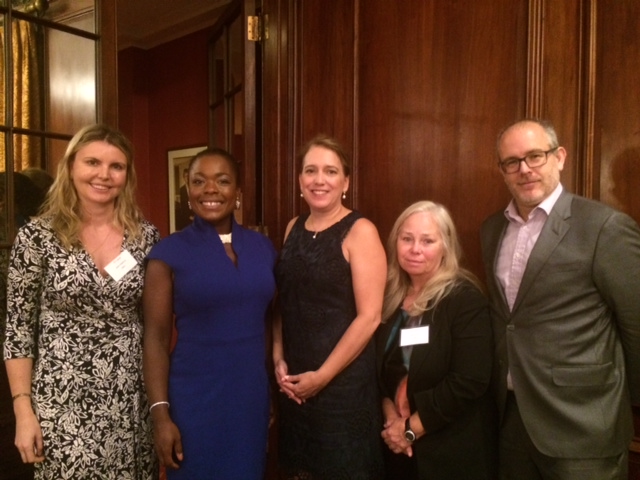 By Nicki Gilmour, CEO and Founder of theglasshammer.com

Theglasshammer convened 100 senior women from traditional and alternative investment management companies last Wednesday 1st June 2016 for the 8th Annual Top Women on the Buyside breakfast panel and networking event. Nicki Gilmour CEO and Founder of theglasshammer.com opened the session with a welcome and an urge for the audience to continue to be change leaders for a culture of trust in their firms and beyond so that the industry can continue to attract women as investors and as participants.

The panel consisted of Judy Posnikoff, Managing Director of Paamco, Donna Parisi, Partner and Co-leader of the Asset Management Group, Shearman and Sterling, Nili Gilbert, Co-Founder of Matarin Capital Management, and Katina Stefanova, CEO and CIO of Marto Capital. Antony Currie, Associate Editor of Thomson Reuters Breaking Views moderated the discussion with candid questions that the panel answered with deep expertise to the peer audience as well as a sprinkling of humor at times.

Themes this year included disruption and innovation as drivers of results with the obvious challenges this year being the risk management of political, economic, credit and operational risk issues in this US election year.

It was agreed that volatility is high, uncertainty a constant and alpha diminished with a backdrop of limited historical data on how to invest in an environment of low interest rates. It was also agreed that all types of disruption, good and bad, was rife with developed countries still trying to ignite their economies post credit crisis. Risk would definitely dominate the short and medium term thoughts of investors. Fintech was also mentioned as an important element of future innovation in the industry without real precedents and an uncertain regulatory environment.

Katina Stefanova began with an overview of the macro environment and framed some issues,

“We deal with political, social and economic risks when assessing investments and this year is a unique year as we are at a pivotal point .We live in a world with over $200 trillion dollars of debt and with such uncertainty, it is not surprising that there is political volatility and that becomes a big issue for markets not just for investing but also for people building businesses. There has been a huge amount of disillusionment with traditional investment strategies, and other popular strategies such as risk parity in last few years. Volatility is here to stay and so it’s about figuring out how to navigate volatility and building that into your application.
It is time to develop alternative solutions.”

“The environment is quite different from 30 years ago when investors could achieve high enough returns with one asset class (fixed income). One of the difficulties of today’s uncertainty and meager expected rates of return is that institutions and individuals are having to take on more risk than they would like to in order to meet financing requirements such as pension liabilities.”

“Negative interest rates and deflationary environments should be something that is taken seriously and it is hard to be informed by history on this. Due to a lack of comparable historical precedents, it is necessary to be thoughtful and insightful rather than just look to historical analysis or a purely data driven approach. “

Katina Stefanova agreed that the environment is unprecedented and the biggest risk is that we are at point when monetary policy is no longer effective. She added,

“Central banks have little power to stimulate or slow down economies. It is time for more aggressive fiscal policy and governments are going to have to play a bigger role. “

Donna Parisi picked up this point when asked about the role of regulators and the change of government in November with the moderator questioning could a new President undo the work done by regulators post credit crisis?

Donna commented on the legislative risk that could come from an election cycle,

“I think Dodd Frank is too far down the road, the rules are so deeply embedded regardless of who takes the White House in November and regulators are
not done trying to fix the lack of transparency that exists in the markets.”

Donna also mentioned that from her perspective that upcoming challenges for the industry would be liquidity mismatches and leverage issues.

“Since funds are more and more becoming intermediaries for lending post credit crisis, there are issues around leverage and the role they should play.” She suggested that regulators are worried that asset managers could be the next too big to fail crisis.

“The regulators are still struggling with information gathering despite the huge volume of data that is required to be reported. They don’t feel like they have enough transparent data to adequately assess liquidity and leverage risk and its impact on the broader market.”

Katina joined this point with her comments that regulatory consequences are not always well understood, and in many ways the government has not eliminated risk but rather transferred it to other institutions.

Nili mentioned that changes in the sell side and how it is regulated can ultimately affect stock price movements and have impact for portfolio managers. By way of example, she cited Reg FD (Regulation Fair Disclosure) as an event, which changed how sell-side analysts released communications, and as a result changed the efficacy of “earnings revisions” as a tool for stock price forecasting.

Other topics discussed included opportunities and creating value for the investor such as changing fee structures. Judy and Nili discussed how it was important for investors to have transparency around how much they had to pay in the search for alpha. Nili also shared her philosophy on finding opportunities stating four main concepts as buying fundamentally good businesses, valuation, shareholder friendly management teams and shorter-term catalysts such as price and volume analysis.

“When we were coming out of the financial crisis, it was a great time to be a value investor because in that environment of fear, there were many cheap stocks. Since then, we have seen investors regain their confidence and so it’s not as an attractive a time as before to be a value investor. Momentum investing is an opportunity that we saw do very well in 2015. What works changes all the time and it is crucial to understand behavioral biases in the markets for optimum results.”

Katina concurred, “ We have factors such as technology, a shift in socio-demographics and this economic environment and the current political volatility that creates a great opportunity for disruption. The question is where will that disruption come from? “

Citing Alibaba as an unexpected money management entity that has grown fast. She added, “It is about access, a platform to retail investors will change it all and it will come”.

Donna added that current incumbents in the market had a competitive advantage when it came to FinTech innovation given their regulated status. However, industry incumbents are at a disadvantage when it comes to being true innovators or disrupters. The rising importance of technology in the industry and the scalability of investment strategies as a result create significant risk for something to go wrong and a resulting regulatory response.

With so much to talk about, and with great questions from the audience, the discussion is hopefully continuing in offices across the world as we speak.

Thanks to our panelists and moderator and engaged audience for another great event!