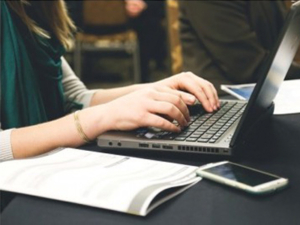 When it comes to women in top executive positions, nothing causes more upheaval than the threat of quotas that could push more women in. But the real threat is the quota that is already in place and not talked about – the quota that allows one woman in but is locking women in general out.

A new study by Cristian Dezső from the Robert H. Smith School of Business and two co-authors David Gaddis Ross and Jose Uribe from Columbia Business School found evidence of a hidden quota at work at the top inside of companies:

If a woman holds one of the top five executive positions at a company, the chances of a second woman joining the top executive ranks falls by 51%.

The culprit behind this hidden quota? The study, to be published in the Strategic Management Journal, could not discern whether this was conscious discrimination or unconscious bias at play. What’s clear however, is the outcome.

Lone Woman Up a Ladder

The authors found that when one woman had been promoted to the top executive ranks, she was not a key opening up executive offices for more women but more like a lock on the door.

What the researchers found was a “negative spillover” – the actual distribution of female top executives was isolated, repelling one another. In other words, most companies had only one, resulting in a fragmented female executive population.

Dezső implies that one woman leads to a pat on the back and now let’s all move on. “Once they had appointed one woman, the men seem to have said, ‘We have done our job.’”

The research also implies that the quota seems to not only to limit numbers of women, but their influence – because many companies satisfy the hidden quota by promoting a woman to a professional position, such as head of human resources, rather than (or to keep them out of) a line position. 47% of first-time CEOS came from a line position in the survey, whereas only 4% came from a professional position.

The researchers noted, “The strongest spillovers are associated with professional positions, which are generally more supporting, lower in status, and less integral to a firm’s operations than line officer or CEO positions. We argue that a firm’s managers have greater latitude to use professional positions to satisfy an implicit quota on women in top management.”

The study found that efforts to promote women into executive roles after one woman was in place become lower or even in opposition. Getting the second women promoted into the top ranks is a far more challenging feat than the first.

Observing company dynamics, Ross told Business Insider that after one appointment, “They orient their efforts away from promoting women, perhaps to the point of resistance.”

The authors speculate that this could be down to “diminishing returns” for companies on the gender equality scoreboard. While companies gain legitimacy, media, and a representative “face” for change when one woman is hired into a top executive position – and even hold an advantage to peer companieswho have zero -the marginal “value” declines with additional hires, while the cost to the status quo becomes higher.

One woman is enough to stave off internal and external pressure for gender equality but not enough for real change. Stopping at hiring one woman into a top executive position is kind of like crossing the starting line, but then prematurely taking a break to rest securely upon your laurels.

No, It’s Not Queen Bee Syndrome

The researchers found that the lowest negative spillovers actually occurred in companies with a woman CEO – a female CEO went some way towards mitigating the implicit quota. If a woman CEO was in place, there was a greater chance of further female top executive presence.

Maybe it’s about time that we stop suspecting the lone woman on the ladder in the crowd of men as the one that’s rigging the rungs.

Protected Territory At the Top

Many studies have shown that women create a positive spill-over for each other, such as decreased discrimination and increased pay, at other management levels.

“However,” the researchers state, “we obtained qualitatively different results among top managers, perhaps because men’s willingness to work towards the betterment of women within their organizations is lower in top management, where each job is so valuable both to the individual who holds it and to the dominant male coalition inside the organization.”

At the top it would seem, male managers are protecting the most valuable turf.

We Must Disassociate “One” With Progress

Whether a board member, an investor, or any champion for diversity within a company, Dezső advises that when you see one woman at the top, it’s best to “keep up the pressure or even apply more pressure” to avoid a plateau.

Today women in top executive positions remain an isolated and fragmented minority. One women among top executives is not a sign of real progress at a systemic level. She’s a sign of more work to be done, and if not recognized as such, a decoy for the changes that aren’t being made.

Real progress doesn’t have a face. It has so many that no one person becomes exemplary of it.