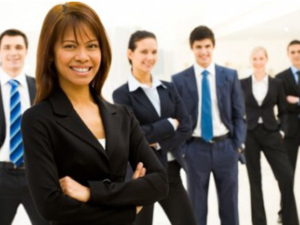 It’s not just because women hold less formal power at the top (only 5% of Fortune 500 CEOs are women and 1% in finance) that they can’t shoulder gender diversity alone. Even when they arrive at executive level, disadvantages in informal power and legitimacy are at odds against women’s efficacy in gender championship.

According to qualitative research on champions of gender equality by Jennifer Anne de Vries, University of Melbourne, one thing remains unavoidable: “Executive level champions are part of the organizational gendering processes they seek to change.”

De Vries’ qualitative research on gender diversity champions in a university and a police force highlights that the champion role is intertwined with sex, gender, and (gendered) power, all at play within a (gendered) organization. Women are inherently disadvantaged as champions of gender diversity in a male-dominated culture. Even at equal rank, a male and female executive stand on a “very different launching pad for their champion behavior.”

Consider this conundrum: Is it possible that when it comes to leading corporate change initiatives correlated with strong business advantages, anything a male leader can do a female leader could do too – except lead the game change on gender diversity?

A woman that holds a position of senior power in a highly male-dominated management culture becomes a symbol of gender diversity by default. Her journey was likely different to her male counterparts. She holds the potential (and pressure) to be a role model as a woman leader within the organization.

But in the champion role (which she’s likely expected to take up), that same dynamic of being an outsider in a male-dominated management culture, but perceived as an insider to gender-equality, spells out lower informal power and lower legitimacy.

De Vries found that senior male executives expressed women can be accused of “self-serving” when championing gender diversity – “looking after the sisterhood – women looking after women.”

And research out of the University of Colorado studying 362 senior executives demonstrated that diversity efforts on behalf of women (and minority) leaders can be negatively viewed as self-serving their own social group. “Nonwhite and women leaders who engage in diversity-increasing behaviors in the highest organizational ranks are systematically penalized with lower performance ratings for doing so,” the researchers wrote.

Specifically, women, held to higher standards of warmth than men, who engage in diversity-increasing behavior “will tend to be viewed as less warm and receive lower performance ratings than their equally diversity-valuing male leader counterparts.”

In fact, diversity-valuing behavior negatively impacted evaluations only for female and minority leaders – “leaders who are thought to have the greatest potential to dismantle the glass ceiling.”

Co-author Hekman noted, “executives who are women or ethnic minorities are penalized every day for doing what everyone says they ought to be doing – helping other members of their groups fulfill their management potential. It is a revealing sign that the supposed death of longstanding biases has been greatly exaggerated.”

In regards to informal power, De Vries research also noted that women in highly masculine contexts may also not have the same security in relationships at a senior level, are likely under more scrutiny in “proving” themselves as a leader (highly engaged in “gender work” of their own), and may not be taken seriously when they “position gender equity as a strategic issue.”

In other words, while their leadership challenges the status quo, senior executive women may not be as well positioned to overtly drive a mindset change among men in the organization.

Men are in the opposite position. Being an insider to the male-dominated management culture but perceived as an outsider to the gender-equality cause, gives male champions more informal power and more legitimacy.

De Vries notes, “Men’s power to challenge the status quo derives from their membership of, and acceptance within, the male establishment.”

Men in a senior executive role don’t have to do “gender work” as leaders (they represent the default stereotype in their environment), likely have more secure relationships as part of the insider club, and are more legitimate in championing gender diversity as a strategic issue because there’s no perceived component of self-interest – although they can actually benefit from it.

The University of Colorado researchers found that when it came to senior white male executives, “valuing diversity gave a significant boost to ratings for warmth and performance” by their bosses. De Vries also found that it led to strong appreciation within the company. And Bainhas found that (mostly male) CEO led gender diversity-increasing action and behaviors converts more employees to company “promoters”.

Indeed, not all male champions are equally effective. De Vries found a male champion is powerful when he’s perceived as really choosing to practice and visibly and consistently embody the role through his actions, not just preach. And resistant, low visibility CEO male championing can actually be ultimately damaging.

Another gender advantage is that a top executive male perceived as having chosen to personally own the gender equality initiative can give it a sense of importance, gravitas, and credibility. Whereas with a female executive, expectations seem to diminish the bonus points in credibility.

Championship – Can We Get More Men to Step Up?

There may be no escaping what De Vries calls a “clearly gendered nature of leadership when championing a gender cause.”

Despite the strong business case for gender equality as a corporate initiative, senior women are too often expected to carry the torch on gender diversity (often predominantly), marginalizing the issue and absolving senior men from being highly involved despite the importance of their power and agency.

We need more men actively onboard at the top senior levels genuinely daring to challenge the system that has benefited them. Should women leaders bow out and just let men take the reins? No. Men and women have the potential to complement each other in bringing change forward. Gender equity requires bravery and business sense on behalf of both men and women in senior executive roles.

Maybe it’s time we saw that there’s more than one way for a woman to be a role model for gender diversity. And equally, it’s about time we saw more top male leaders displaying bravery, rather than delegating it to women, when it comes to leading the charge on making gender diversity change a corporate priority.