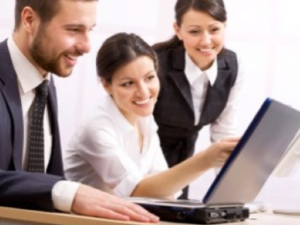 Recently, The Glass Hammer hosted its Third Annual Women in Technology networking event, sponsored by American Express. Our panelists discussed how they advanced through the ranks to become senior leaders within their organizations.

Christie also commented that a big trait each of the panelists displayed was a desire for growth. Throughout their careers, the women identified their next step, made it known what they wanted, and then set out to achieve it. “As they made that next move, it was something they saw out there and went for it – they decided ‘this is what I want and I’m going to go for it.’”

It can be difficult for women in technology to find their niche and break through to leadership in the male dominated technology workspace. Yates Rivers believes a big part of this comes down to confidence. “On the company side and on the customer side, most of the people I interact with are men. But I have noticed that women will tend to doubt themselves and won’t take as many risks in general,” she explained. “Or they won’t give themselves individual contributor credit. They’ll say, ‘the team did this,’ whereas men will say, ‘I did this.’”

A big factor in developing breakthrough confidence comes from gaining the support of coworkers and superiors. In fact, in recent years, sponsorship has been increasingly recognized as one of those game-changing factors for advancement. Sponsors are senior, influential people who champion the individuals they believe in. They may put them up for promotions or suggest them for stretch assignments. In return, protégées support them and come through on the assignments they’ve been sponsored into.

The event’s keynote speaker Catherine Ashcraft, Head of Research at the National Center for Women and Information Technology (NCWIT), gave a presentation on forthcoming research on the subject of male champions. “Men are often the leaders and gatekeepers in the technology environment. It’s important to understand men’s experiences and what motivates them,” she explained, specifically when it comes to championing women and diversity on their teams.

Ashcraft said prime candidates for male gender champions are men who have had female mentors, who have daughters or working wives, who have noticed inequities on their own teams and worked to correct them, or who see themselves as a minority as well.

She encouraged women to feel free to tell their own stories about what it is like to be a woman working in technology. “We want to help men who want to be advocates but are not sure how.”

Several of the panelists also discussed men who championed their advancement. Ulrich explained how she chose her first job out of college based on which boss she felt would be the best champion. She said, “I recognized that this was a guy who seemed to really care about people in that company – now I know that he was a sponsor.” Similarly, Derry broke into the tech space when a male champion who interviewed her for a job took a chance on her. She recalled, “He said, ‘you have none of the skills we need right now, but I see potential in you. I’d like to hire you and we’ll find you something to do.’”

Yates Rivers, who founded her own company after working for Exxon for many years, said that an appetite for risk is a critical part of being an entrepreneur. She explained, “I just felt internally that I needed to direct my own path. Starting out in Corporate America is great. But if you have an inner desire or an innate desire to be your own boss in technology, then there is that possibility.”

Now, she is driven by the ability to develop solutions for her clients. “Being a sales person has taught me a lot about how to negotiate and ask for what you want.”

Similarly, Vitale’s own reinvention brought her into the technology field. After working in CFO roles for a time, she was offered the role of Chief Information Security Officer at American Express by one of the company’s presidents she had gotten to know well and who trusted her (sponsorship again). She accepted the stretch role because of his support. “I’ve thrived here,” she said, “because I’m so fascinated. I’ve forced myself into very uncomfortable positions to keep learning.”

Ulrich also took a big risk when advocating for transformational change at Legg Mason – and wound up with a new and exciting role. The company was in the process of dismantling its centralized technology division, but she saw an opportunity and made the case to senior management to transform what was essentially a “keep the lights on” model into a “grow the business” model. She convinced them to explore outsourcing the technology functions that were really commodities, and “take the budget headroom that outsourcing would create and spend on innovation,” she recalled. “I said if you think that this approach makes sense, then I’ll throw my hat into the ring for CIO.” And that’s exactly what happened.

Both Vitale and Derry discussed how they leveraged their personal skills to help them advance. Vitale, who has spent her entire career at American Express, said the early skills she developed as a college student working in customer service for the company have benefited her throughout every stage of her advancement. “I learned to listen and understand people, which helps when you are doing problem solving. And problem solving really helped me understand how to navigate.” She continued, “Don’t underestimate some of those early job skills. You learn something with every experience and carry it forth.”

Derry began her career in technology without having a traditional technical background, but when she started working in the space, she managed to catch up through a lot of studying and hard work, she recalled. She explained that her skills as a problem solver also helped her advance to leadership. “One thing I’ve learned is that when you raise your hand and say I don’t understand this, more people are willing to say so too. I think that helps you because then you are fixing things from a consensus-driven standpoint.”